I was supposed to meet some people from out of town for drinks but we missed connections. This was mostly my fault because I forgot to take my cell phone with me after I left a message for him earlier. Scott, if you read this, I apologize and hope we can do it another time. Instead the Mysterious Chinese Woman and I headed to the South Street Seaport and subjected ourselves to mostly overpriced drinks in touristy bars. Oh well, sometimes Bar Man must suffer for his quest. 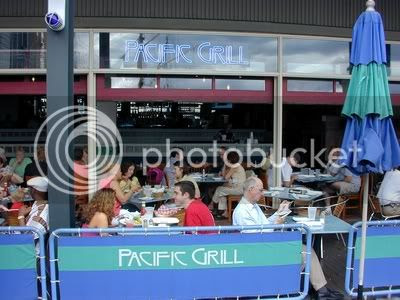 Located in the touristy, and pricy South Street Seaport this is about as far removed from yesterday’s haunts as you could get. Bar Man will probably not hanging out here, although the scene is a little more reasonable during the week when they have Happy Hour specials. The bar itself isn’t bad, just empty because everyone was sitting outside on the deck. The front of the bar has got a greenish copper fish-scale design with a shiny copper top and a wooden armrest. Mirrors with attached glass shelves behind the bar are loaded with liquor and wine. Below the mirrors are blue lit Lucite tiered shelves holding even more bottles. There are what looks like stylized palm trees flanking and separating the mirrors. The palm trees repeat the green copper fish-scale motif. There are two large plasma televisions, one at each end of the bar.

Two large wood frame and blue cloth fans turn lazily overhead. For some reason they reminded me of the scene in the Frankenstein movie where they guy gets caught up on the blades of the windmill. Probably not what they intended. The wall decorations have a nautical touch, wooden fish, a lobster, and a seahorse on one wall and a large ceramic fish of some type on the other. 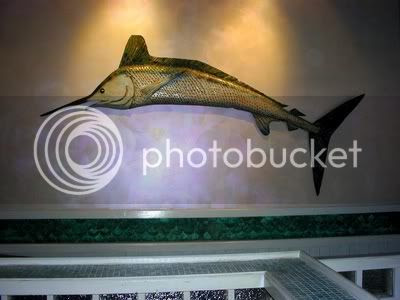 The walls are kind of a pale tan with a waist high repetition of the fish-scale design. There is an indoor eating area down a couple of steps from the bar area and it is separated by a wood and glass-brick partition.

I had a gin and tonic, no brand specified, and served in a plastic glass even though I sat inside at the bar. The Mysterious Chinese Woman had a club soda. The tab was $11.00 so I wasn’t real happy. 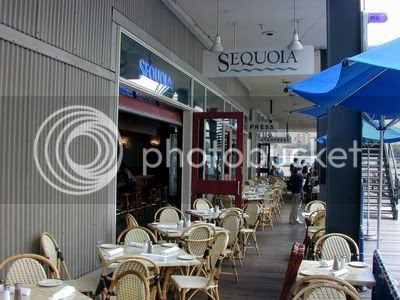 Out of the frying pan and into the fire. Almost next door to the Pacific Grill is Sequia and it wasn’t doing nearly as much business. There is a nice long wooden bar with a black marble tank and a brass rail. A large fish tank, badly in need of cleaning, held three sucker fish and a couple of quite large fish of an unknown, but obviously hardy, species. There is a fairly ornate set of mirrors flanked by columns with decorative gold painted tops but no liquor was set out so it kind of gives the appearance of a bar going under. A shiny gold beer station with the spigots removed added to that feeling. Most of the activity seemed centered in the smaller area adjacent to the deck where they had frozen drink machines. The most distinctive decorative touch is the old wooden hulled boats hanging from the ceiling. Given the miniscule size of the drink that was served, once again, in a plastic cup, it didn’t take me long to drink it and head on out. 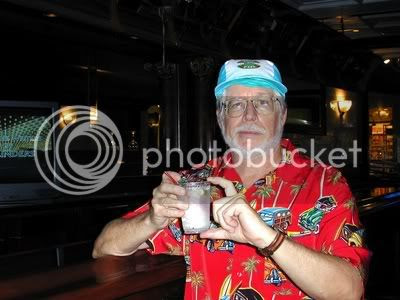 I had a Tanqueray and tonic and along with another club soda it was $8.75. I don’t usually bother listing prices unless they seem either very reasonable or a bit out of line. Just want to give anyone that plans on heading here a heads up on what to expect. 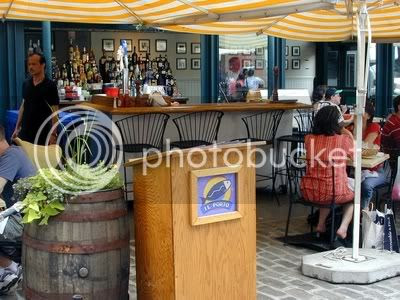 Still in the South Street Seaport but across the street from the building right on the East River is this bar and restaurant that is a bit more to Bar Man’s taste. At least here they trust you with real glasses. The picture above is their outside bar where it would have been fun to sit and toss one back. Unfortunately it was closed because the bartender doesn't come on duty until later in the evening. Go figure. The place is packed, the day is beautiful, but you have to go inside to sit at the bar and have a drink.

The inside bar has a blue padded front and a multi-colored tile top, quite festive. There is a silver colored bar rail. A standard mirror backed setup behind the bar with glass shelves holding a decent selection of liquor and glasses. Tubular shaped, multi-colored lights hang from the ceiling that seems to be mostly ventilation ducts. The lowered ceiling above the area immediately behind the bar is white ceramic tiles.Old Italian movie posters line the front of the column supported overhang above the bar. 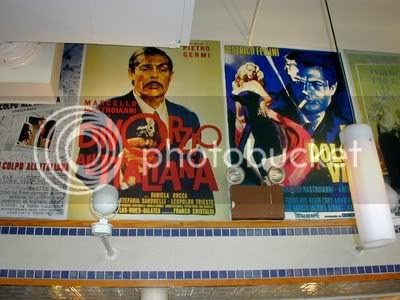 Far and away the best bar in the Seaport with a very friendly staff. 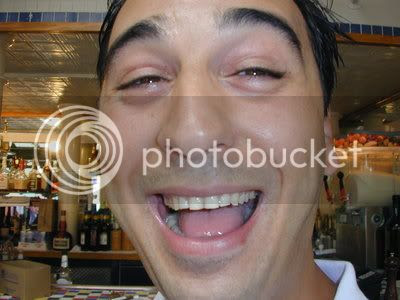 They have a decent selection of bottled beers but not much on tap. I had a bottle of Peroni Nastro Azzurro in a real glass. 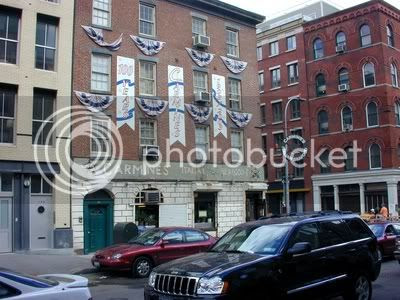 I heaved a sigh of relief as I left the Seaport area and wondered just a block or so away to tuck into Carmine’s at 140 Beekman Street on the corner of Front Street.. There are other Carmine’s in Manhattan, but they are not related to this one. This is the real deal and it has been around since 1903. If you aren’t hungry when you walk in here you probably will be once you get a whiff of the Italian cooking. It has a moderately sized dark mahogany bar. The walls are paneled in dark oak. Old cabinetry behind the bar frames three mirrors, two of which are pretty much obscured by tiered shelves holding the liquor. The mirrors are flanked by two cabinets with glass doors holding the premium liquors. Flanking the center mirror are two narrow wine racks. The top of the cabinet displays beer, wine, and a large old Cutty Sark bottle. There are also several carved wooden figurines, a mounted fish, a framed golf shirt, and a few other knick knacks. There are mounted fish on the walls around the rest of the place as well.

The ceiling is authentic dark brown patterned tin. Large globe lights are mounted below ceiling fans. In addition to the fish, there is other mounted nautical themed stuff mounted on the walls including a life preserver from the Honey-Fitz. Four wooden booths line one wall and three tables with four chairs on a side occupy the middle of the space. One small table sits by the front window.

If you get to the South Street Seaport I would strongly recommend that you pass by the restaurants there and head a block or so west and stop in here. A word of warning, this place really packs up at lunch and dinner, especially during the week when the people who work in the area head here.

I had a Sapphire Bombay martini up with a twist at the bar before sitting down for a delicious seafood dinner. 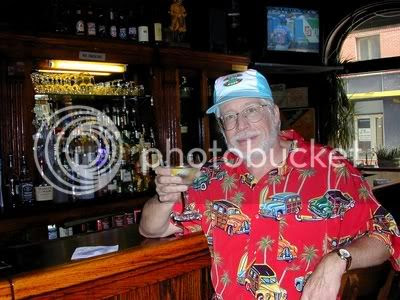 "Help me if you can I'm feeling down" - I also think I must be lost.

I was searching for Elvis and somehow ended up in your blog, but you know I'm sure I saw him on the golf course yesterday. Now this is strange because usually I see him in the supermarket.

Honest really, last time I saw him there he was right in front of me, next to the steaks singing "Love me Tender".

He said to me (his lip was only slightly curled) "Boy, you need to get yourself a shiny, new lcd tv to go with that blue suede sofa of yours.

But Elvis said I, In the Ghetto nobody has a lcd tv .

Dude I'm All Shook Up said Elvis. I think I'll have me another cheeseburger.

Then I'm gonna go home, put ma dancin' suit on, munch me some uppers and freak out to that maaaaaaaaad surfing scene in Apocalypse Now on ma lcd tv .

How cool is that boy?

And then he just walked out of the supermarket singing. . .

"You give me love and consolation,
You give me strength to carry on "

I really enjoyed you cooking gas website. I also have a site about cooking gas Please take a look. I hope you will find it interesting

Stop by and have a look at volkswagen gti turbo

I just ran across your site and enjoyed reading through everything.

I'm trying to get a blog going on my site too. But I dont think i have the patience to do it!

Hi thanks for your blog, I liked it! I also have a blog/site about Body Building that covers Body Building related stuff. Please feel free to visit.