I had a most interesting day today. Didn’t hit many bars, only two, but had a most delightful stay at the second one. So delightful that I was there for quite a long time and had quite a number of…, well you shall see. 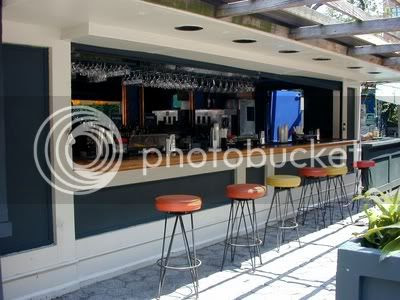 This is a real find and the day couldn’t have been better to find it. The weather was beautiful, sunny but cool with a nice breeze. A perfect day to spend time in a park and what could be better than to find a bar in a park. And right in the heart of Union Square where you are surrounded by great restaurants and bars. Nothing too fancy here, but then it wouldn’t be fun if it was. The front of the bar was painted in Park Board green and white and had a brown patterned Formica top with a heavy wooden arm rail. No foot rest though. A white overhang with recessed lights would help keep out the rain, but I don’t think I would be drinking here if it did that. There is a trellis that extends out from the overhang but nothing growing on it. It would be cool if it had vines or something. The barstools are metal rods with either orange or yellow vinyl seats. Planters separate the bar area from the red and white umbrella covered tables in the rest of this restaurant and bar oasis. 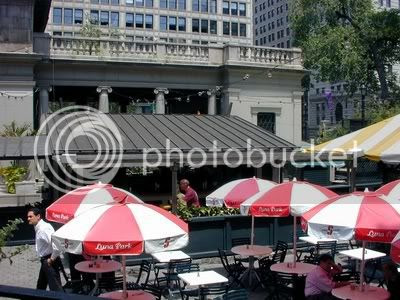 The longer planter behind the bar stools has a ledge for setting your drinks and has barstools in front of it. There were plants in the planter but the Mysterious Chinese Woman wasn’t with me to identify them. The floor is hexagon asphalt, it is outdoors after all.

There are a couple of large gold framed mirrors hanging on the dark blue wall behind the bar and glasses hang from wood and wire-frame racks just behind and above the drinking area. There is an overhead fan and a couple of lamps hanging from the white ceiling in the bar area. No ceiling anywhere else, just blue sky.

The only downside to Luna Park is the prices they charge, $8.00 for a small Tanqueray and Tonic served in a plastic glass. One guy came up and wanted to buy a bottle of water but left when he was told it cost $4.00, I would leave too, but then I don’t drink water. They had a frozen margarita machine and they were $10.00 and I suspect they weren’t very big either.

I had a Tanqueray and Tonic. 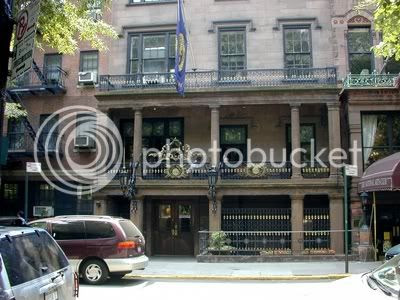 I ambled over to The Players, a club for actors and people in professions related to acting, located right across from Gramercy Park At 15 Gramercy Park West. The building was built in 1845, then remodeled 1888 by Stanford White after Edwin Booth bought the building and turned it into an actors' club. Interestingly, Mr. White met an untimely end. He was rather gruesomely shot to death while attending the opening of the musical review of Mam’zelle Champagne. But I digress, as I often do.

This is a members only club but I was invited by Lee Pfeiffer, a fan of my website and the publisher and editor and chief of “cinema RETRO,” a magazine that focuses on movies of the 60’s and 70’s. You can visit his website by clicking Clint:

Well, to say this place is gorgeous in an elegant but somewhat informal way hardly does it justice. I was given the grand tour by Lee and even got to see the living quarters of Edwin Booth, the founder of the club. It is unfortunate that Edwin is not nearly as well known as his brother, John Wilkes. Edwin’s living quarters remains essentially unchanged since his death and is kept locked but I got a peek, thanks to Lee.

The bar area, where I spent most of my time, surprise, surprise, is fairly small with old long benches and a few smaller old wooden tables. The walls are covered with photographs, paintings, and caricatures of actors and actresses. The bar itself is an old dark wooden affair with a couple of spigots for draft beer. The bartender comes on duty later in the day so it is somewhat of a serve yourself affair until then. No barstools but I did stand at the bar for a beer, rules are rules.

Standing on the other side for a change 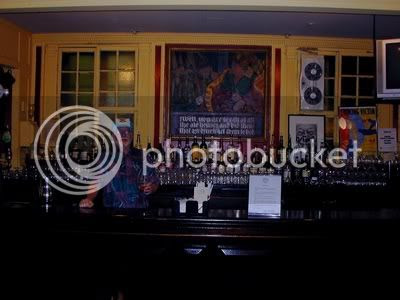 To say I had an entertaining time is an understatement. After I arrived we were joined by Michael Allinson, a former president of The Players. Mr. Allinson, a well known British actor, came to the United States in 1960 to take over the role of Henry Higgins in the Broadway production of “My Fair Lady. He regaled us with anecdotes, which cannot be repeated here, of the time he traveled with Rex Harrison as his understudy in the play. Later we were joined by Lawrence Samuel Shaw who, among other things, does impersonations of Groucho Marx professionally. Although has done many other things he looks so much like Groucho that it is what sticks in my mind. Others came and went as well and the hours just kind of went by. It was a really fun day, Thanks again Lee, I hope to reciprocate when you come to Brooklyn one day. The Mysterious Chinese Woman was most disappointed that she missed this delightful afternoon.

I had one, two, many Sierra Nevada Pale Ales and topped the whole thing off with a Sapphire Bombay Martini after the bartender showed up. Oof. Do not believe anyone who tells you Bar Man only has one beer in each place he visits.

Bar Man Waving Good-Bye. I remember to stand up later. 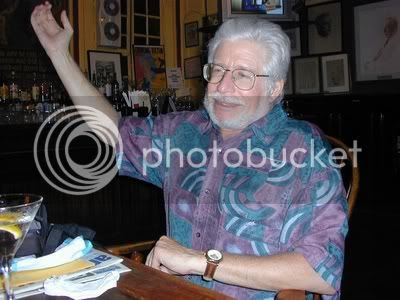 Tomorrow evening I am having drinks with Larry McShane and his brother. Larry is the guy who wrote the Associated Press article that gained so much attention and it was his brother who turned him on to my blog. No article this time, just having a gargle or two.

Living a good honest life, being who you would like to be, teaching our children how to have had. Does this sound familiar. I'm writing to you today to see. Arrested in changing your life by using student motivation techniques. I have spent a lot of my life working and listening to other people complain about things they think they have no control over such as their lives. Using modern student motivation techniques you can change your life today. You can start living a life you've always wanted to live.. I have found a site that is very helpful and has helped me change my life forever. If you're interested in changing your life today visit this site and you'll see what I'm talking about http://2sucs.com/se.pl I am living proof that life will change on the outside when you change which you think on the inside. I would be writing this today if I thought the way I used to think. Thank you for letting me post on your blog I hope this information will help other people change the way they think and start living a good life. Thanks again

Hello, Your blog is awesome but I was looking for tiffany floor lamp so I guess im on my way searching some more. Thanks for the great info.

discount tiffany lampTiffany lamp reproductions are available for anyone who wants to purchase a tiffany lam; this will keep the lamp seekers from spending thousands of dollars on an original. True antique floor lamps are much harder to find and are substantially more expensive; depending on their history and design. Although original tiffany lamps were made over a hundred years ago, they still are well sought after and reproduced today.

lamp tiffanyTiffany lamps are a household word more than a century later and remain a great choice for home and business decor. The original tiffany lamp may cost a lot to purchase, however some of the orginials can still be found today; with the right price offering i am sure a person could get their hands on one.

tiffany table lampBefore the you decorate your home, figure out the budget for the project in case you can afford a few classic pieces such as a tiffany lamp.

tiffany lamp grapesTrue antique lovers of the tiffany lamp will drive several miles to get the lamp of their dream; you would think that this style of lamp has been out dated. The lighting in the room can change a person's mood; the light can either serve as a pick me up or a bring me down depending on the brigtness and dimness.

discount tiffany lampBefore the style of tiffany lighting, patterned and colored glass was not a major player in light fixtures. Today the copper foil method that is being used to reproduce the tiffany lighting is very affordable to the manufactures, therefore they will be sold to you at a very inexpensive price. Tiffany lamps have the ability to soften the incandescent lighting in rooms and create a natural lighting effect.