I headed back to an area that once was close to my heart, over on 3rd Avenue and 17th Street. There used to be a bar there called Tuesday’s and this was one of my major hangouts when I worked in the area, the other one being Molly Malone, just up the street a bit. Alas, neither the place I worked nor Tuesday’s are there anymore. Tuesday’s was the major after-work watering hole and Molly Malone was the later in the evening hang-out. Those were the days my friend. 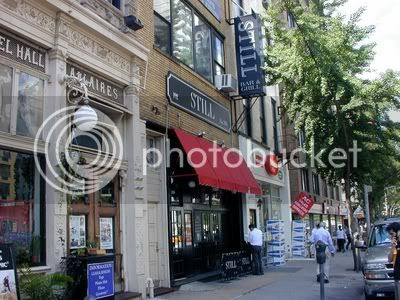 Just next door to where Tuesday’s once was, at 192 3rd Avenue, is this very nice place. It looks like it has been around a long time but is actually fairly new, just built to look old. It has a good sized dark wood bar with a tin top and the necessary bar rail. The bar stools are wooden with brown vinyl seats held in place by decorative brass-headed tacks. The floor is old looking wood. The walls are brick behind the bar and in the back. The other walls have waist high dark paneling and are then kind of a marbled red above. Narrow mirrors separate the paneling from the rest of the wall. Above the red is a fairly wide band of white. The walls in the front are lined with old pictures of the bartender’s family. The bartender, Joe, did the restoration work on the pictures. Actually, the bartender is the father of one of the owners so the pictures just reinforce the friendly family atmosphere of the place. 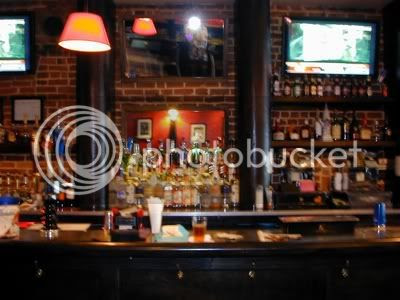 Orange shaded lights hang above the bar and there are those interesting chrome fans on the ceiling that look kind of like a malted-milk machine on steroids. They do the trick though and this is only the second time that I have seen them. There are three nice televisions behind the bar along with mirrors, shelves for liquor, and dark columns. A 91 inch television that is used for special sporting events dominates the half-wall to the left of the bar.

The bartender, Joe, was a most gregarious gentleman and we sat and chatted for quite awhile. Luckily the place was empty except for me once a few of the late lunch-crowd left, but that is because it was that dead time between the lunch crowd and the evening crowd. If you get in there during the day I am sure you will have a pleasant time and, I would imagine, this place would be a hoot at night. I am posting a link to their website so you can see what I mean. Bar Man will certainly visit this bar again when time permits. 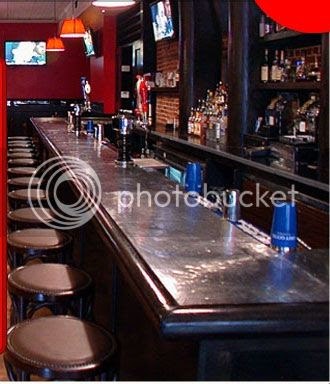 I had a Magic Hat #9 generously topped off when I had it about half finished. Little touches like this makes Bar Man a happy man. 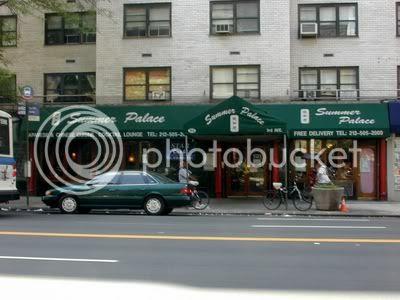 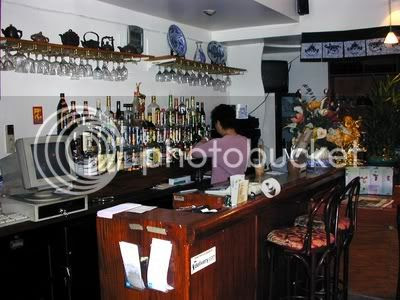 Nonetheless, it had the requirements for Bar Man; a bar and bar chairs. I would have been remiss to have passed it by. There is a large fish tank that greets you when you enter the door and this one does have fish, big, fat, goldfish. To the right is a very small bar with two bar chairs covered in very worn patterned silk. There is a shadowbox on the wall with the top half of what looks to be a Chinese doll and Japanese lanterns hang in the windows. There is a sushi bar adjacent to the “Cocktail Lounge” and a Chinese restaurant on the other side of the room. A fat, aren't they all, gold Buddha sits on one end of the bar and he is surrounded by a large floral display and a small growth of bamboo. Blue banners with fish hang behind the sushi bar.

The bar itself is light wood with a Formica top. Behind that is a decent sized collection of liquor. There are a couple of small wooden shelves, one holding Chinese decorative plates and a vase, the other holds what looks to be antique tea-pots. Hanging below the shelves are wine and cocktail glasses.

I had a chilled sake on the rocks with a cucumber slice. Very nice and quite refreshing on a hot day. I wouldn’t recommend that you come in here with a large crowd if you just want to hang out in the “Cocktail Lounge” though. 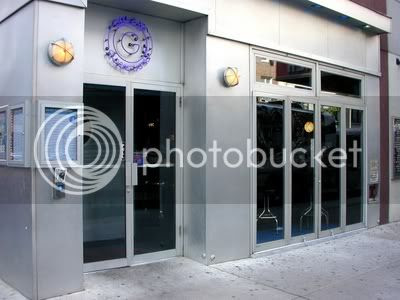 On 15 Irving Place is this kind of a combination of a roadside diner and Star Wars. A bit of a trippy place as you might imagine when they have things like Hempnut Buckwheat Pancakes on the menu and reggae on the sound system. It has a black bar with a dark blue, kind of sparkly, top. All of the tables in here have the same tops. The bar is decent sized and has a foot rest. The bar stools are chrome with black tops and are what you would expect to see in a diner or an ice cream parlor. The back of the bar is a patterned metal exactly like what you see in the interior of so many diners. Only a small collection of liquor on stepped shelves and on a couple of mounted metal shelves gives this place away as a bar at all. It does a fairly brisk business at night though because it is fairly close to Irving Plaza where there is always something going on.

The walls are dark blue with windows on two sides. Blue globe shaded lights hang over the booths along one wall. Blue topped chrome tables with chrome chairs that have black seats and backs run down the center of the room. The ceiling is black with small recessed lights. In the center of the ceiling is a round blue and white mottled dome light surrounded by pin-point lights that make it look like a field-of-vision test with everything turned on. There is a mirror at the end of the hall leading to the bathrooms that make you think there may be a back room. Don’t be fooled, there isn’t. You can buy a Big Blue Galaxy Condom from a machine in the men’s room (and probably in the ladies room) for a dollar.

I had a Grey Goose de Citron martini, straight up, with a twist.

So nice to keep up on your journey... your AP link does not load though... we would love to see it... Chef Marty, Left Bank Cafe~

Apparently it has expired. I will replace it with something else. Thanks for letting me know, bro.

Something I'd love to see you do... some "recommended lists". Eg. "old school NY bars" or "dive bars" or "good patio bars" or "best bars for big groups". You've amassed a ton of knowledge, and I think it'd be great to be able to tap into that a bit. Just a thought (I know it means more work for you).

That is a good idea. I will have to try to work it in somehow. I notice that on radio interviews when they ask me about bars that I don't like they seem to cut the interview short when I start ragging on TGIF's. Maybe they worry about losing, or not getting, a sponsor.