Back To My Local Watering Hole

I haven't really gotten out and about all that much since my return form Mexico.  Been a bit on the lazy side.  But on Friday I did return to the Waterfront Ale House.  For some reason I had a hankering for one of their hamburgers. 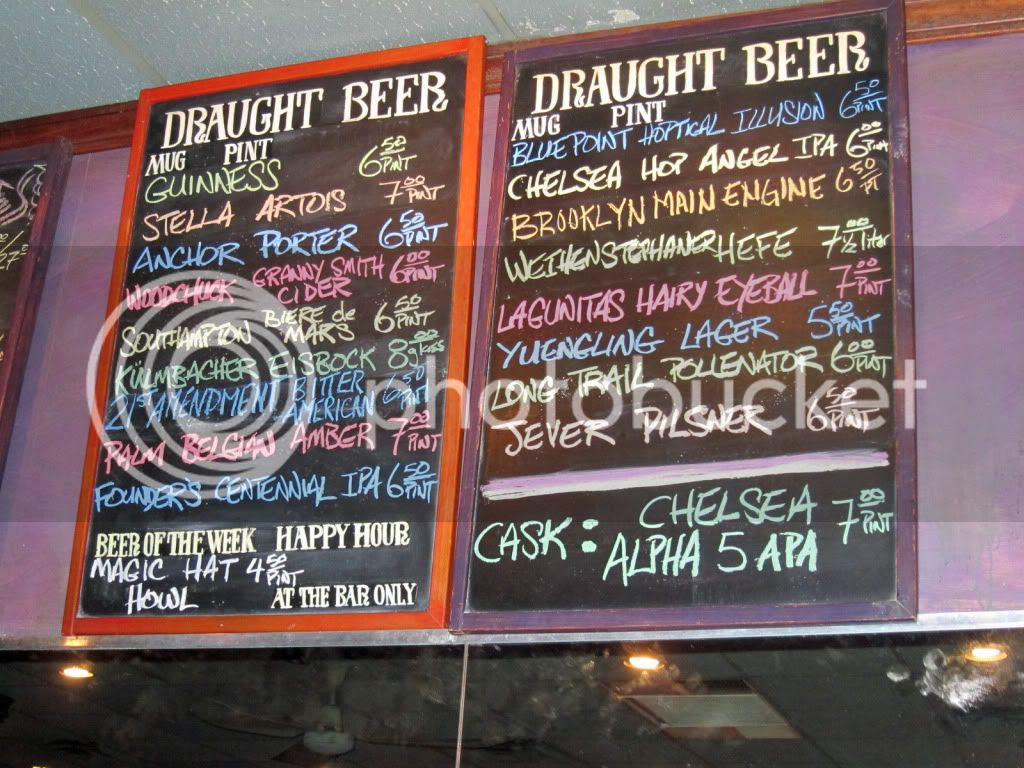 I started out with a Southampton Bier de Mars.  This is a local beer brewed on Long Island by Southampton Publick (not sure why they need that "k" on the end) House.  It was quite good, with just a touch of sourness.  Kind of a hard apple cider finish to it, but not a sweet cider.  It doesn't have much of a head and is kind of a pale orange in color.  I believe this style of beer uses an ale, or top-fermenting, yeast but then is lagered (aged in cool conditions).  Very tasty, although I don't think I would quaff them all day.  It is a respectable 6.5% ABV, although I have seen reviews saying it is as low as 6.2% ABV and as high as 7% ABV.  A bit unusual to find such a spread. 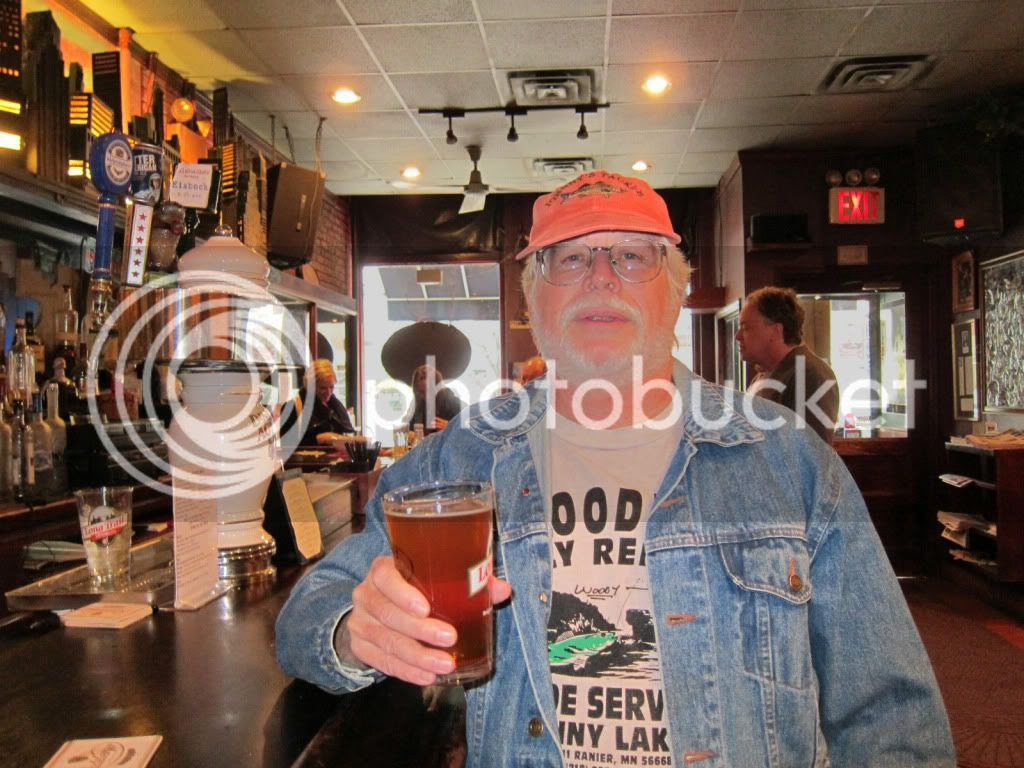 I ordered an old standby, a Yuengling Lager, for the Mysterious Chinese Woman.  I have been trying to get her to remember what she likes and order for herself, but she prefers to rely on my judgement.  Sometimes that works, sometimes not so well.

But Yuengling Is Just Fine 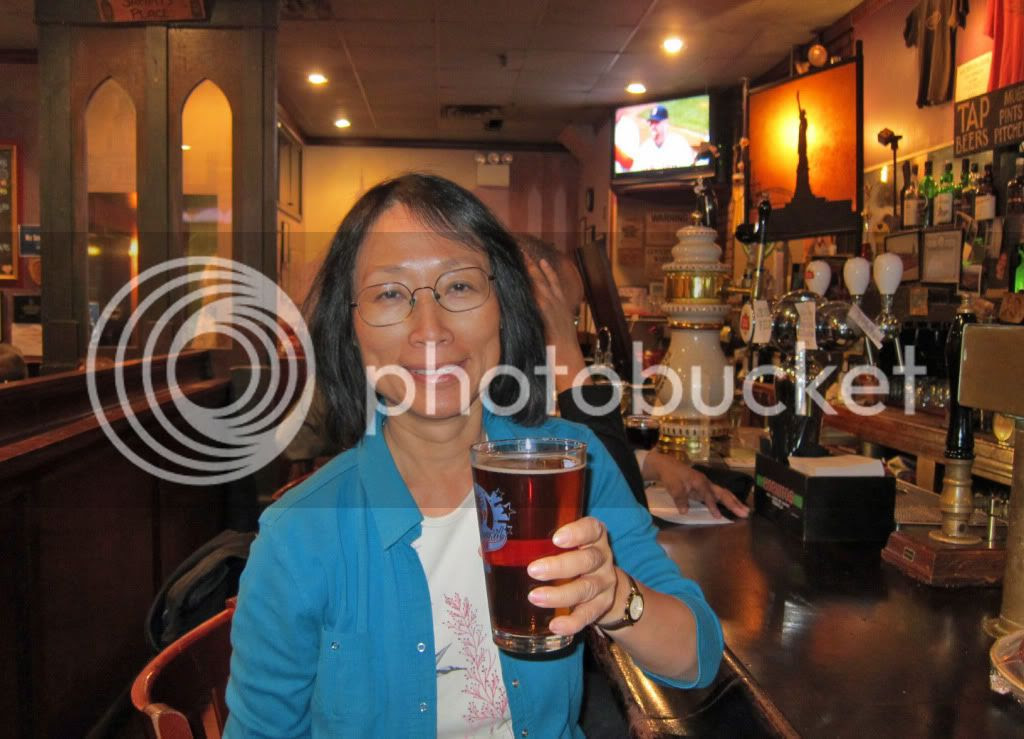 Gaid agreed to pose for an updated photo so I don't have to keep digging into the archives.

Some Things, And Some People, Just Never Change 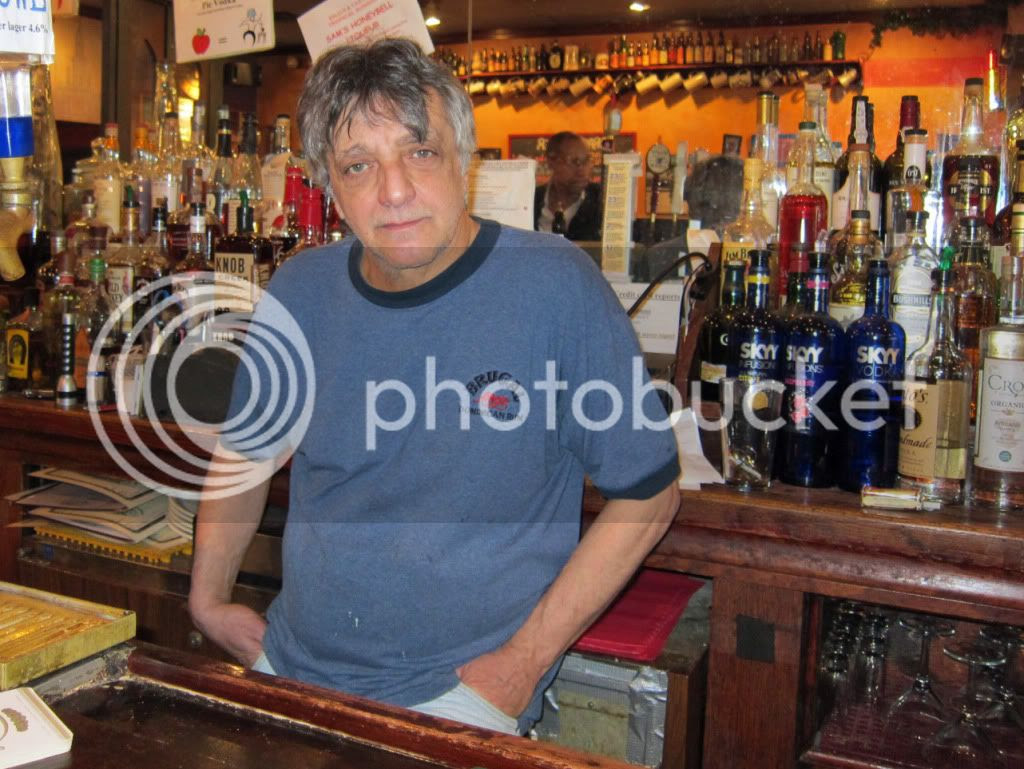 There was a table with a some kids sitting up front by the window and it was obviously one of the kids birthday.  I suggested to Gaid that he bring over a cupcake and sing Happy Birthday.  Bet you can imagine how that suggestion was received.

The Mysterious Chinese Woman and I decided to have a bit of a nosh in addition to the free popcorn so we ordered a hamburger and an order of Jamaican chicken wings to split.  I had a 21st Amendment American Bitter to go with it.  I guess they sell this beer primarily in cans because even the draft handle had an empty can on it.  In fact it looked like it was just a can stuck on an old draft handle.  Somehow Sam must have gotten a keg of the stuff.  It wasn't bad, kind of like a beefed up Budweiser.  And with an ABV of only 4.4% it is definitely a beer you could drink all day long.  Especially on a hot summer day.  In fact a case of cans in a cooler of ice sounds pretty darn refreshing. 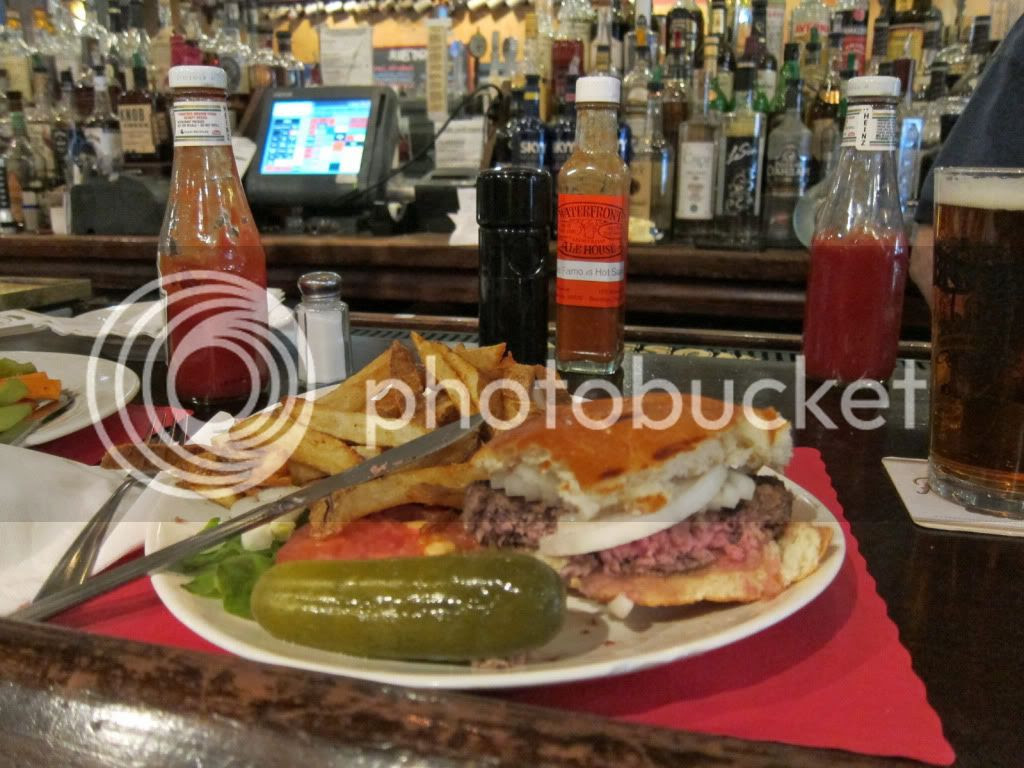 The Mysterious Chinese Woman With Her Half 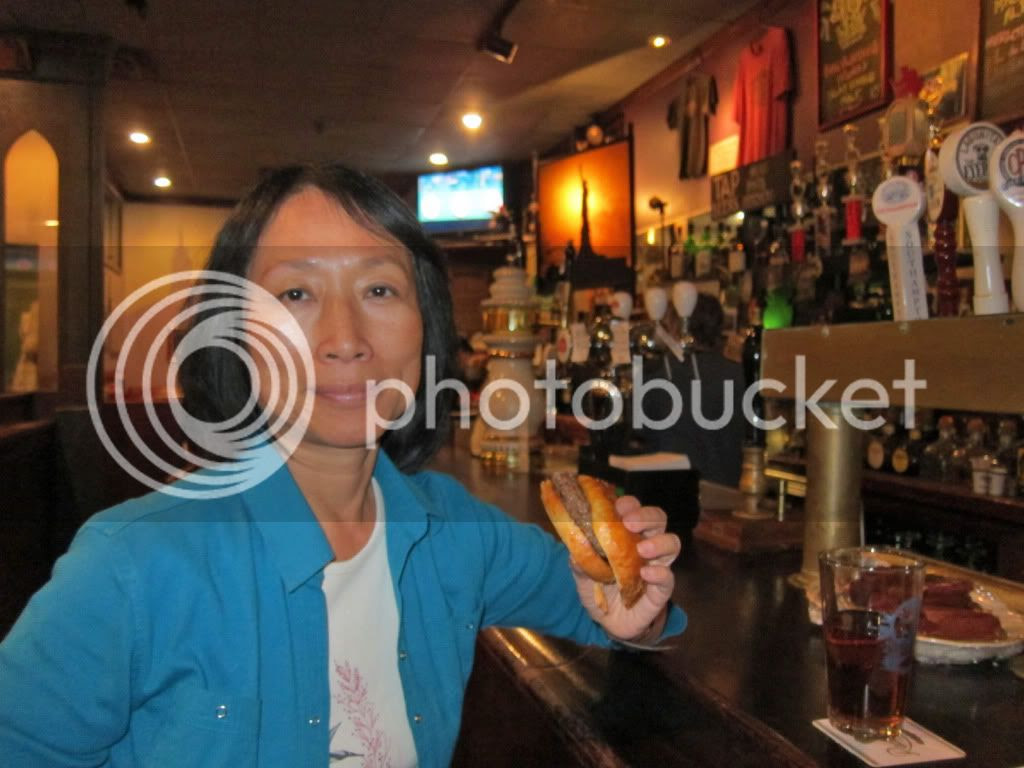 The hamburgers were, as always, quite delicious.  Sometimes I will go for the bacon/cheeseburger or even the hamburger with just blue cheese, but the plain ones have to be good or nothing put on top will fix it.  They also come with a large serving of very good fries.

And, We Also Had The Jamaican Chicken Wings 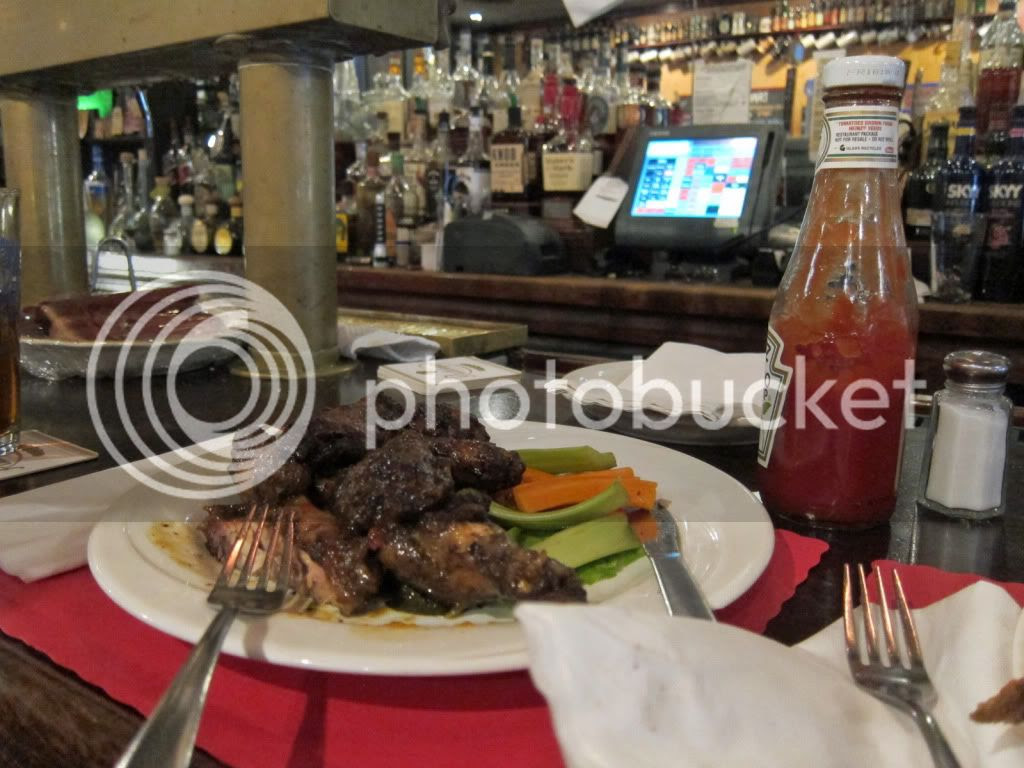 These too were very good.  A nice, slow building heat and very flavorful.  The heat was so slow building that after your first bite you think "This isn't very hot at all."  A couple minutes later and you are thankful that you have a beer handy.

I was going to call it a day but then I saw that their Bar Special, only $4.50 if you drink it at the bar, was Magic Hat Howl.  I am a big fan of Magic Hat and their #9 is one of my go-to favorites.  I had never had the Howl before so wasn't sure what I would get.  I thought maybe something yellow, like the moon, or something.  I didn't expect a dark stout.

What The Howl Is This? 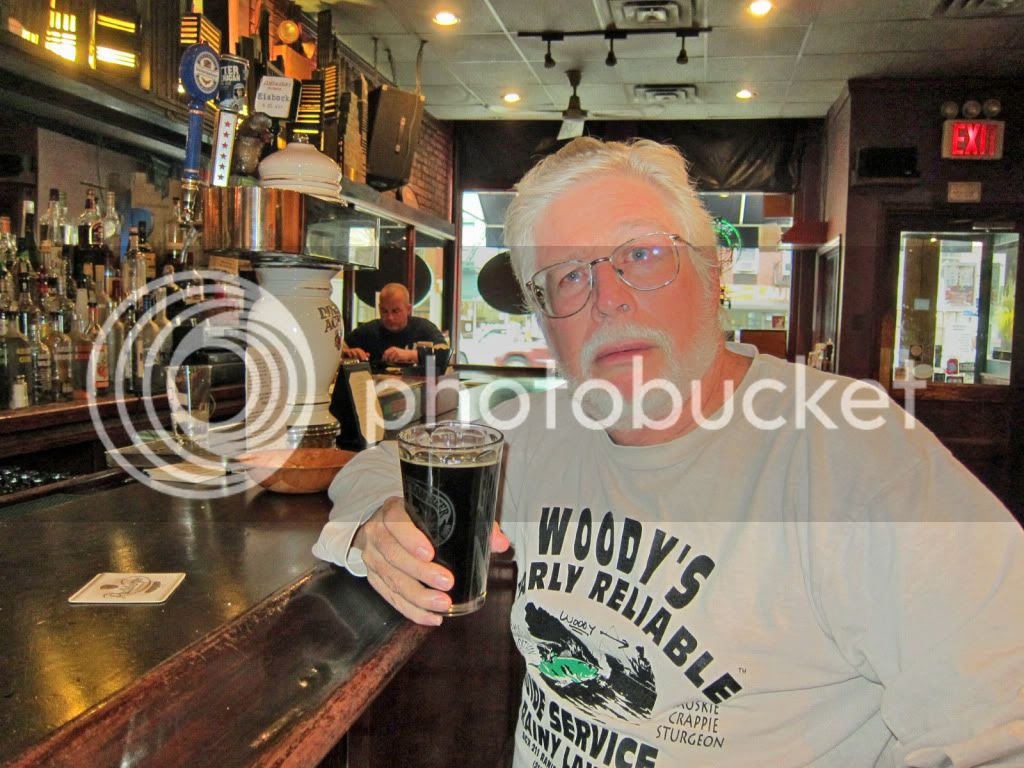 Actually, it wasn't a bad beer with which to end the day.  And Magic Hat claims it is a black lager, not a stout.  Not sure exactly where one draws that line.  This beer has a nice coffee and cream colored head with a decidedly blacker, dark coffee colored rest of it.  And the taste has a bitter coffee flavor as well, with maybe a hint of chocolate lurking in the background.  Not a bad beer at all and with a relatively benign 4.6% ABV you can down of few of these.  Maybe half a case of the American Bitter and half a case of Howl in a cooler of ice would be a good idea.

Ah, I was in a mellow mood and could have gazed all night at one of my favorite sights. 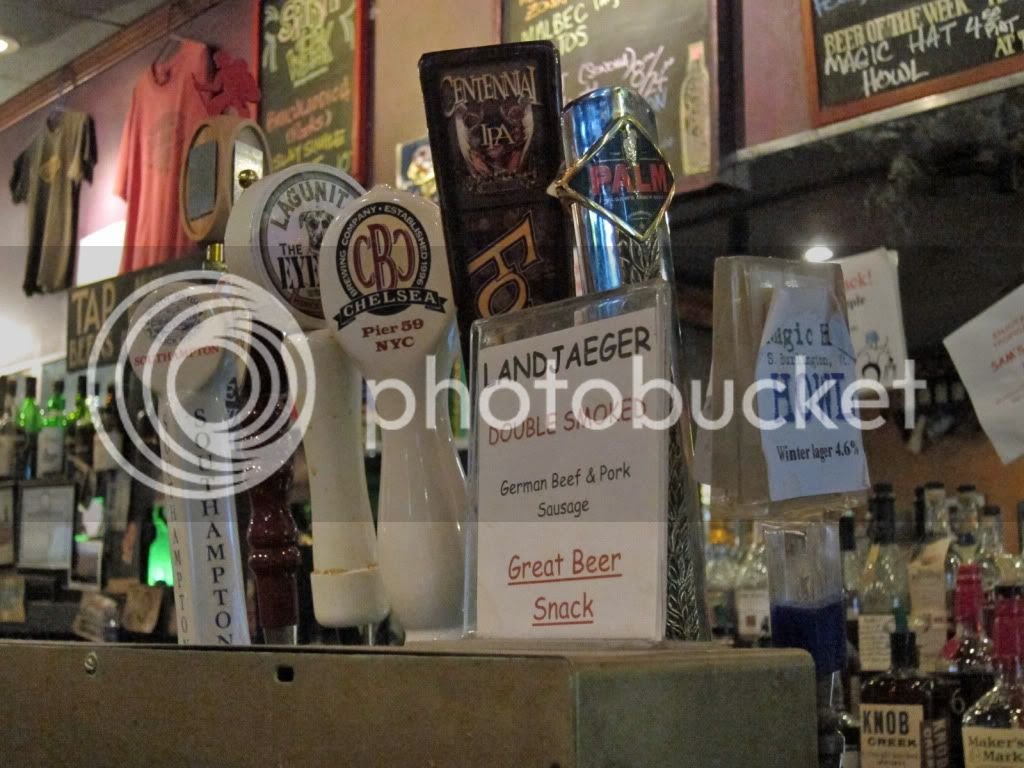 But toddle off we did.  Me to take a nap and the Mysterious Chinese Woman to watch some sad love-story about two Chinese peasants on the eve of the communist revolution.  She woke me when it was over so I could catch the Knicks/Nets game.  Knicks just killed them.  Next season the Nets are moving here to Brooklyn, not far from where I live.  I will probably go to a game or two and they will be the first games I have gone to since giving up my Knicks season tickets during the Thomas/Starbury era.
Posted by Bar Man at 11:28 AM