What can I say, a real cliff-hanger, but the Jets did manage to win. 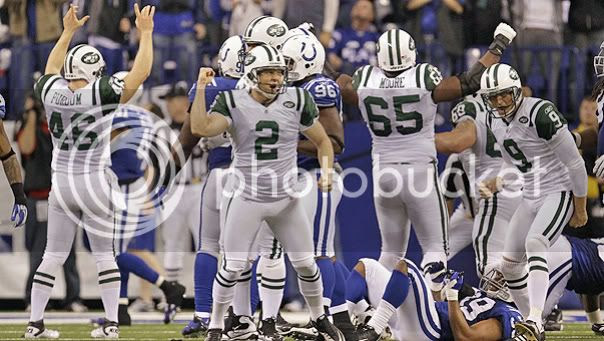 Things looked a bit grim when the Jets couldn't convert a third down on their second to last possession, even after being the beneficiary of a "roughing the kicker" penalty.  But the defense managed to hold Peyton and the Colts and our offense managed to get us down the field for the winning field-goal.

It may not have been the prettiest win in the world, but it looked damn pretty to me.  And with Sanchez pulling off that last drive, and winning some of the really close games, some in overtime, earlier this year, he is looking like the real deal.  He may be the most dangerous quarterback in the game with time running out and needing a score to win.

And don't forget, last year Mark became only the second quarterback to win two playoff games his rookie year (the other being Joe Flacco) and now owns a 3 and 1 playoff record. 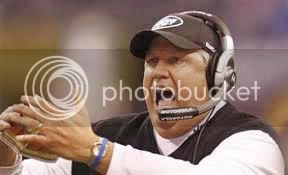 And, somehow, we have to thank Brett Favre for making this all possible.  Brett may have thought he played the Jets for a fool in his quest to go to the Vikings but, You know what?  He who laughs last laughts loudest.  And whose laughing now?

I am begining to like my Brett Favre New York Jets jersey more and more as time goes by.  I sniffed it this morning and it is starting to smell like napalm in the morning - it smelled like VICTORY.  Of course the Mysterious Chinese Woman thinks it just needs to be washed.  But then she also washed the two sweaty towels that Sue Wicks threw me.
Posted by Bar Man at 6:36 AM