Berlin, We Are Here

Well, it was a long and very unconfortable journey to get here.  Long, well, that can't be helped.  Uncomfortable, that is another story.  We flew Lufthansa, which I had always associated with being a classy airline.  The flight to Frankfort,where we changed planes, was the most uncomfortable commercial airplane that I have ever been on.  They had obviously refitted this plane so they could get in more seats and it was horrible.  Not only was there no leg-room, but some of the seats had, well, who knows what under them so if you sat behind them  you had no room to put anything under the seat in front of you and little room for your legs.  If you did manage to fall asleep you got woken up and told to put your seat in the upright position if the person behind you wanted to use their tray-table to eat dinner or something.  I am not looking forward to my trip home.

On the other hand, the flight from Frankfort to Berlin, also on Lufthansa, was very comfortable.  Wide seats and plenty of leg-room.  Of course that was only a forty-minute flight whereas the flight to Frankfort from New York was about seven hours.

The airports in Germany are kind of interesting. At the gate in Frankfort they have these things like they have at JFK where you catch the train-to-the-plane.  Only instead of inserting your Metrocard you insert your boarding pass and it opens to let you on the plane.  Then at the Berlin airport the baggage carasol is right where you get off the plane.  It looks like each carasol handles the baggage for just two gates.  And then after you get your baggage you just walk through a door and and you can exit the airport.  Very quick, very easy.  And at no point did we go through customs or have to fill out any declaration forms or anything.  There are a few points where they check your passport and you do have to go through security when you switch planes in Frankfort.  Quite a strange experience.

The person from Viking was right there to greet us and our van was right outside.  A quick ride and we were at the Berlin Hilton.  A no hassle check-in and we were in our very nice room.  Spacious, nice flat-screen TV, comfortable beds, very, very nice.

My Night With Hilton - Berlin, Not Paris 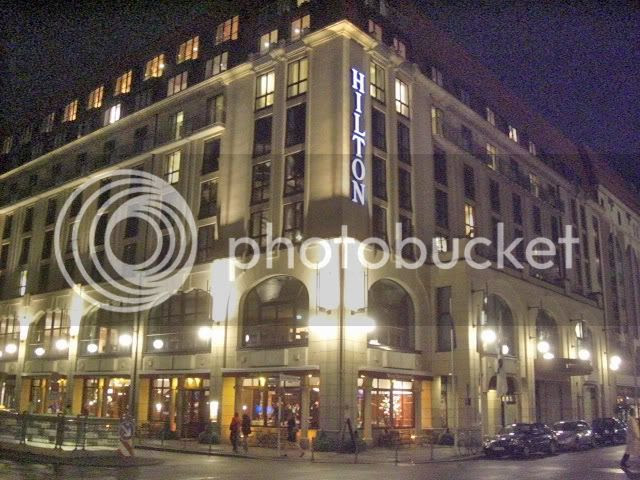 The Berlin Hilton is in a very nice part of the city.  Plenty of restaurants, a close walk to the Spree River, lots of old buildings, a subway-stop right outside the door - just perfect.

Right Out The Door 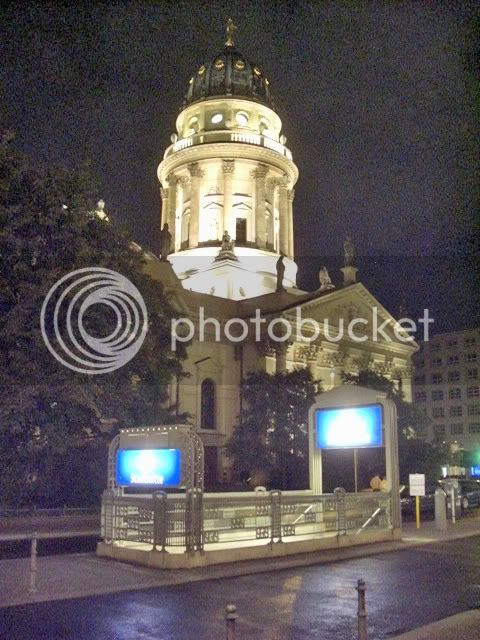 We got into Berlin mid-afternoon and had a short meeting with a Viking representative.  Then, because we couldn't sleep on the flight over the Mysterious Chinese Woman and I took a bit of a nap.  We got up around 7:00 PM, took a quick shower and headed out for dinner at one of the nearby restaurants, and there were plenty to chose from.  We just walked about two blocks until we saw one that looked crowded and went in. 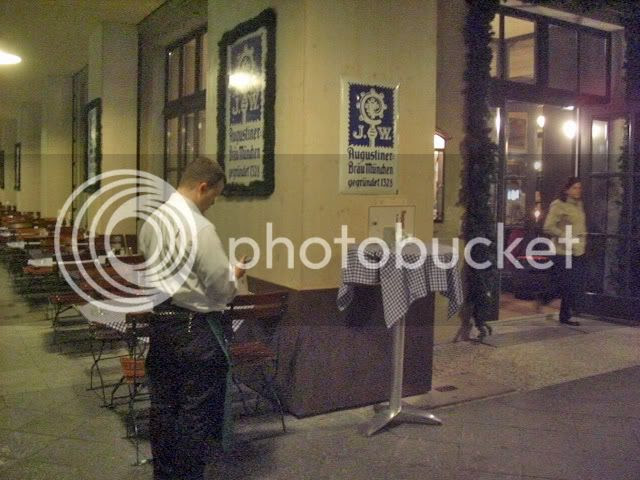 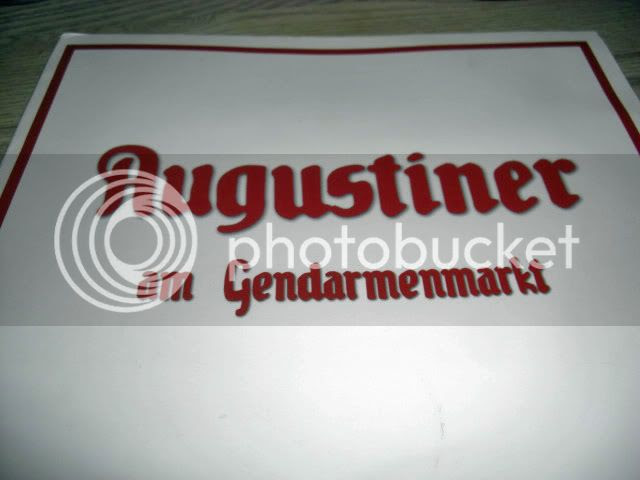 Most of the restaurants had outdoor seating but it was kind of chilly and drizzling so not too may people were eating at these tables.  Inside was another story. This place was pretty packed. 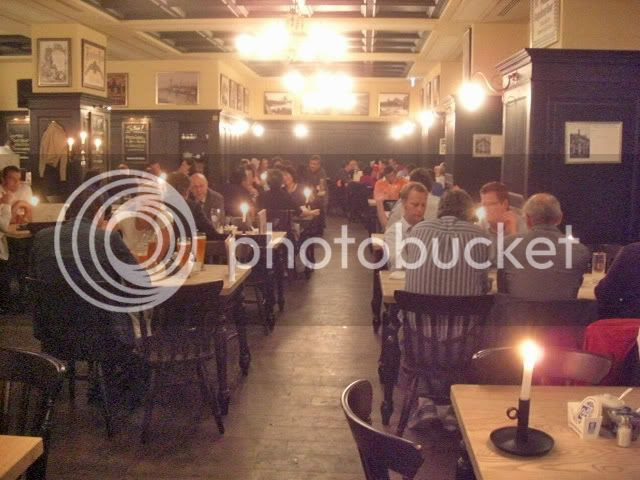 And they do like there beer here. Almost everyone was drinking beer, and lots of it.

Beer For My Men 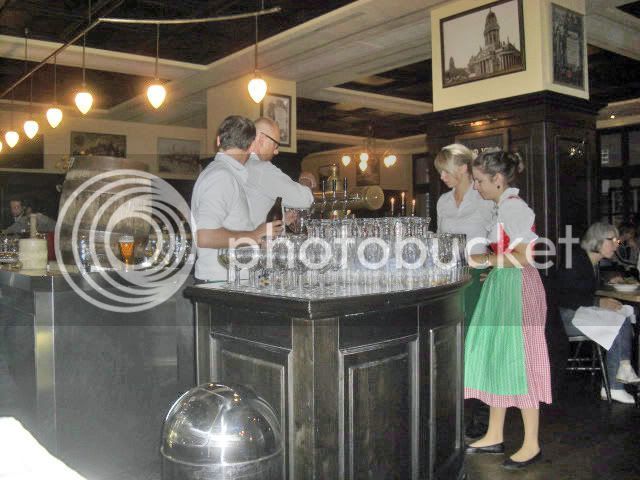 And this was perfectly fine with me.

Beer For The Bar Man 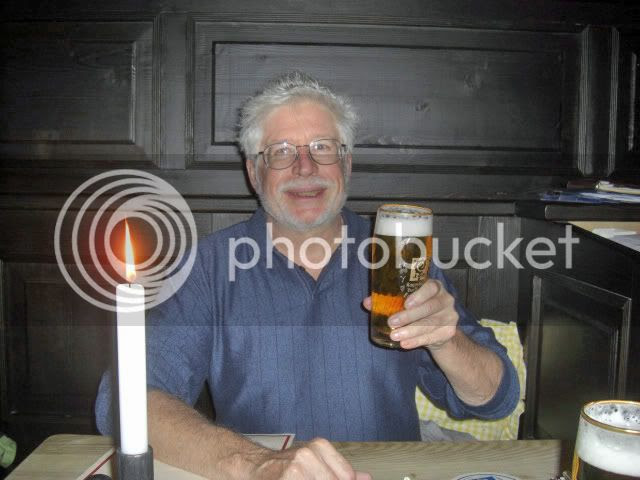 The Mysterious Chinese Woman was more interested in the menu. 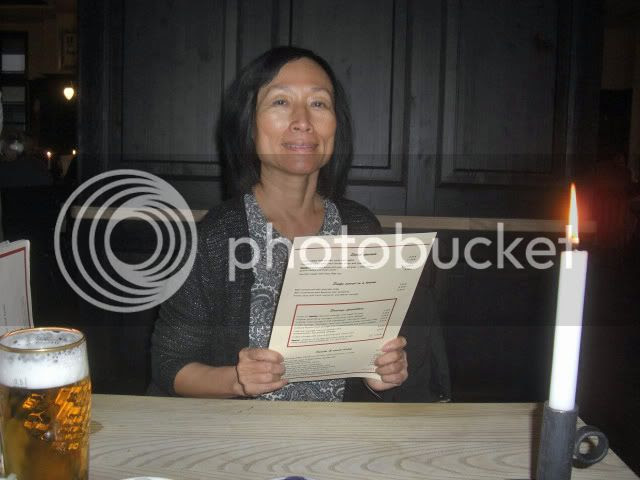 And I am not kiding about the innards, apparently they are some kind of a local specialty.

Waiter, There Are Innards On My Menu 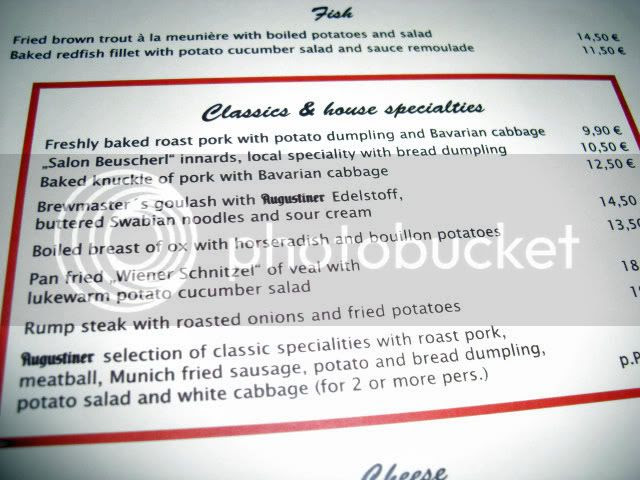 I opted for something a bit more mundane, a baked pig knuckle. 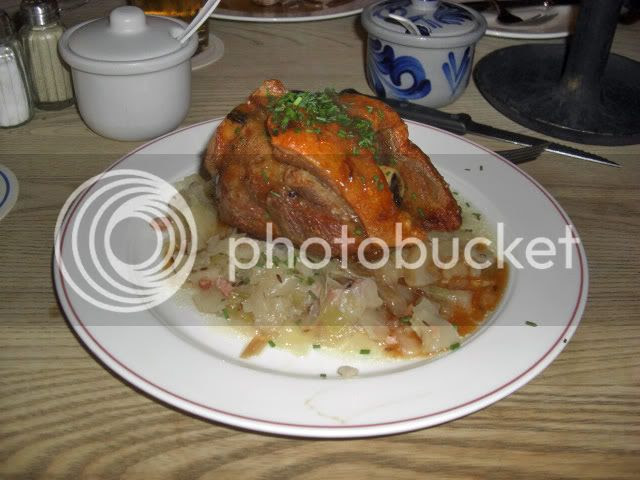 And this was delicious. The skin and fat were really crispy, almost like that deep-fried fat that I like so much when I am in Mexico. The inside was nice and juicy and tender and the cabbage was great.  Way more than I could eat, though.

The Mysterious Chinese Woman had a pork dish with the same cabbage and a potato dumpling.

Just One Dumpling, But A Big One 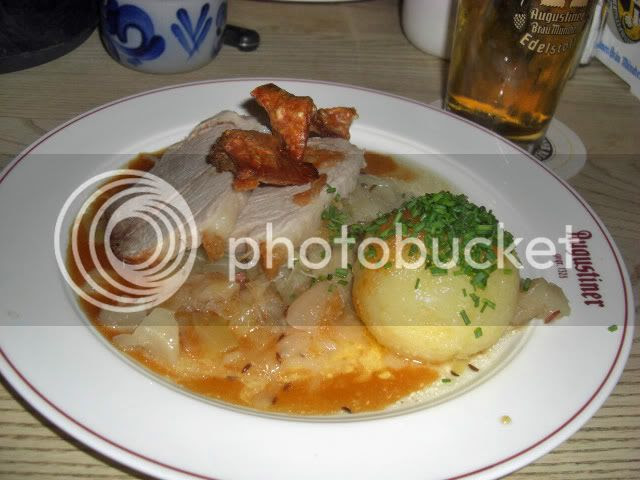 I really liked this restaurant and if I was going to be in Berlin longer I would go back again in a minute. But we are leaving Sunday morning and I will be lucky if I have digested this meal by then.

I have an internet connection in my hotel room until tomorrow afternoon (17 Euros for 24 hours) so I should be able to post once more before boarding our boat. Then probably not until Monday.

Kind of a fall-like crispness in the air, but not bad at all.
Posted by Bar Man at 12:18 PM