The Mysterious Chinese Woman and I got together with my brother-in-law Jim last night and we decided to eat Izakaya.  Well, eat and drink.  An Izakaya is a Japanese drinking establishment that also serves food.  The word Izakaya is a combination of two words, "i" which means "to sit" and "sakaya" which means "sake shop."  These are becoming increasingly popular here in New York.  In fact one stretch on St. Mark's must have about half-a-dozen of them.

The Mysterious Chinese Woman and I took the subway to Astor Place and headed towards St. Mark's.  On our way we passed by Continental, and how can you not stop in there for a $2 beer or 5 shots for $10.

Continental, The Cheap Place To Drink 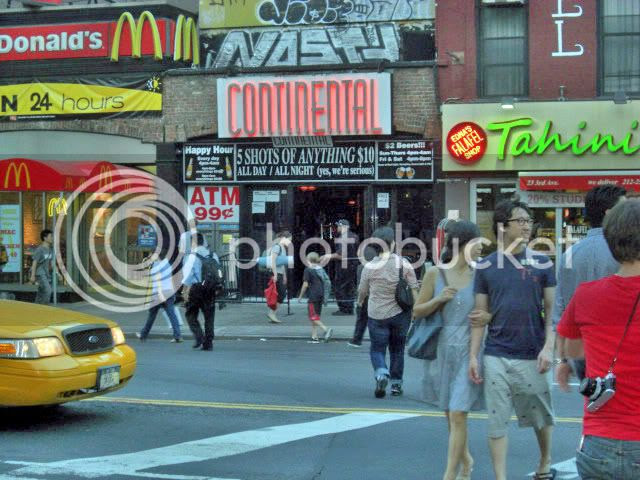 They have a very strict door policy here, both the Mysterious Chinese Woman and I got carded.  It is kind of a deep dark place and wasn't very crowded when we walked in.  Old Betty Boop cartoons were playing on the back wall and the bartender was busy punching toons into the jukebox.  So busy, in fact, that she didn't pay any attention to us for about ten minutes and totally ignored a guy at a back table that walked right past her to go to the bar to order a round of drinks.  Then when she got back behind the bar she decided she needed to powder her nose.  Service is not their strong suit here.

Oh, and the $2 beers don't include Brooklyn Lager.  They are $4, but still not a bad price.  Maybe I should have stuck to the shots.

After my beer and three cartoons we headed right around the corner to Yakitori Taisho, a little downstairs (these places are almost always downstairs) place.  And they almost always have red lanterns out in front. 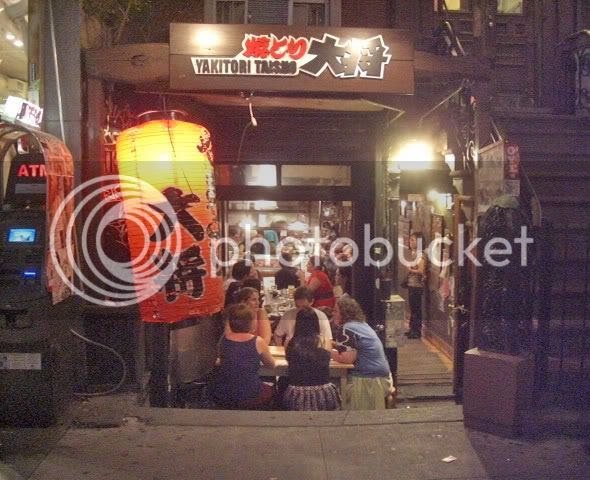 It was pretty crowded, with a line, when we got there and then we had to wait for Jim so I stuck the Mysterious Chinese Woman in the line.  When Jim arrived there were no tables in the front so we were ushered into the back room.

Just Down The Hall 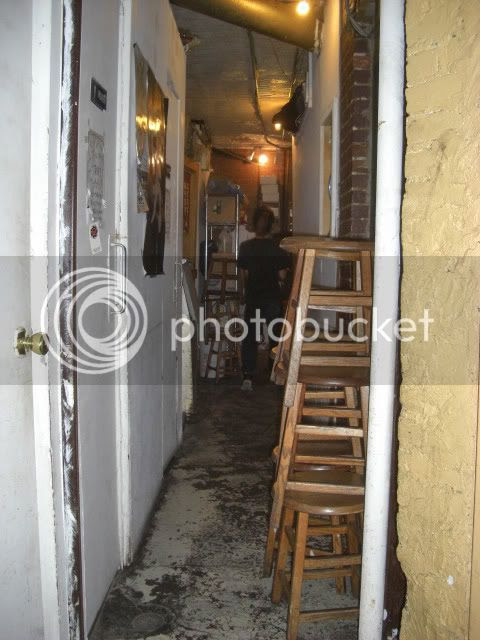 You can't say that they went overboard on the decorating, but then that kind of adds to the ambience.

You Call This Ambience? 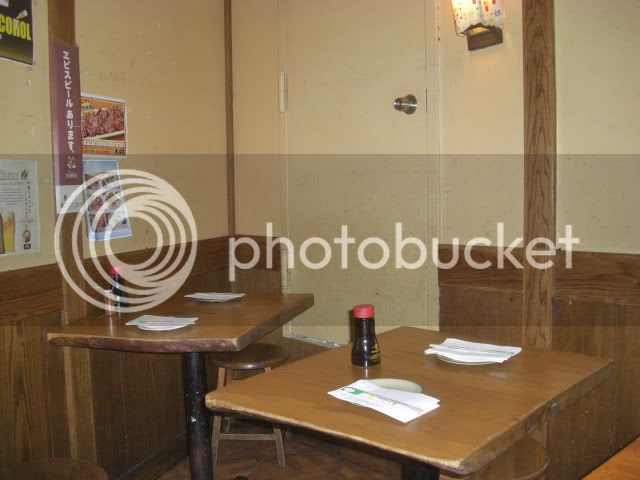 They didn't really put a whole lot into decorating the walls, either.

Form Follows Function, Or Something 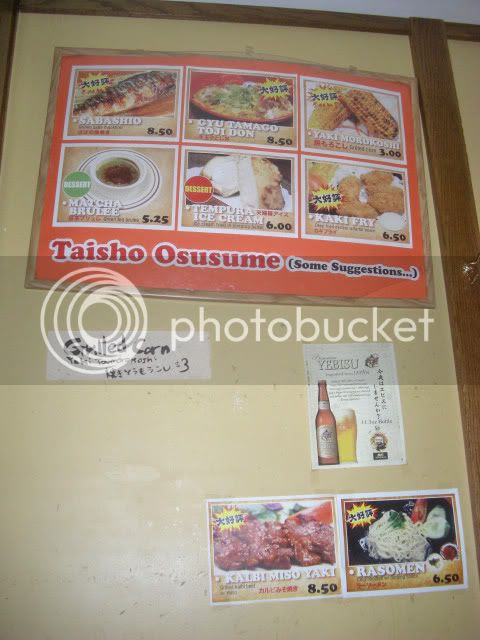 It actually looks kind of like the modern day version of where Zatoichi, the blind swordsman, might hang out.  Of course then there would be at least half-a dozen dead people on the floor before this peaceful man finished his meal.  You would think people wouldn't hassle a guy who can pick flies out of the air with his chopsticks.

I guess in a place like this it is the people who provide the atmosphere.  That and the sake. 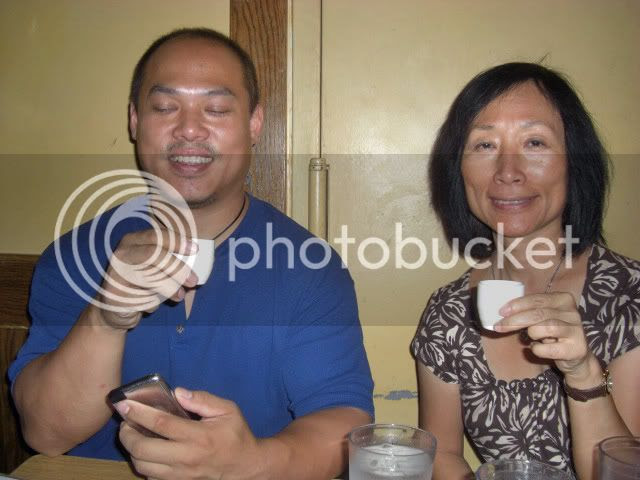 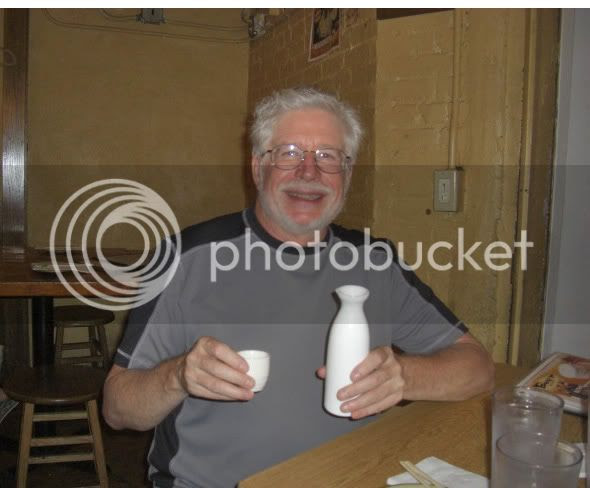 Because of the large amount of cabbage they serve with everything, we contributed more and more to the atmosphere as the evening wore on.

One of the attractions of Izakayas is the relatively inexpensive food served in small portions so you can share and sample a lot of different stuff.  We had an assortment of food that included chicken gizzards, pork belly, pork with kimchi (which I didn't think was Japanese), a bunch of chicken stuff on skewers, squid, and lots of cabbage. 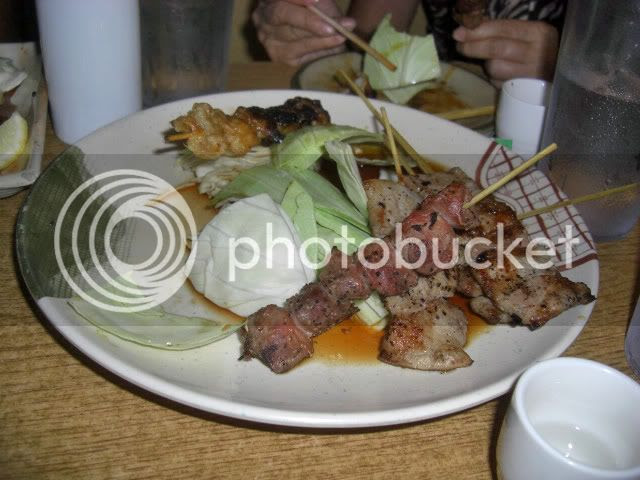 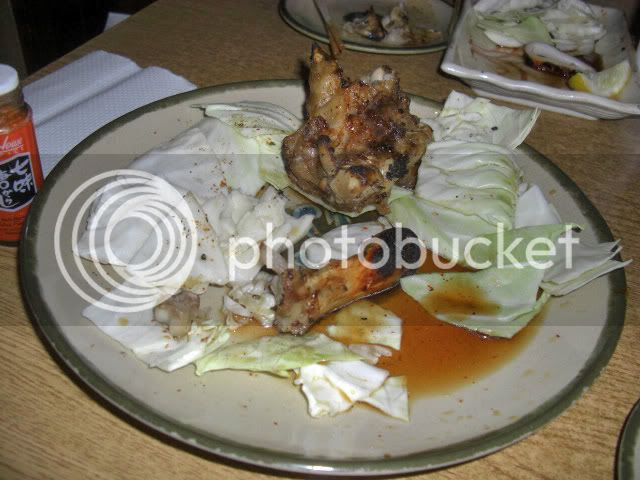 We also tried three different kinds of sake that ranged from fairly sweet to dry.  All were good and served well-chilled.  Then we finished up with a couple bottles of Yebisu, a Japanese beer that is put out by Sapporo.  One of my favorite beers for just quenching my thirst on a hot day is Sapporo.  Clean and crisp and in a big can.  Japan's answer to Budweiser, but I like it better.  The Yebisu is a darker and more flavorful beer and isn't bad at all.

A Yebisu For You, So Don't Be Blue

All and all it was a most enjoyable evening and the Mysterious Chinese Woman certainly looked like she ate and drank her fill.

Ah, The Look Of Contentment 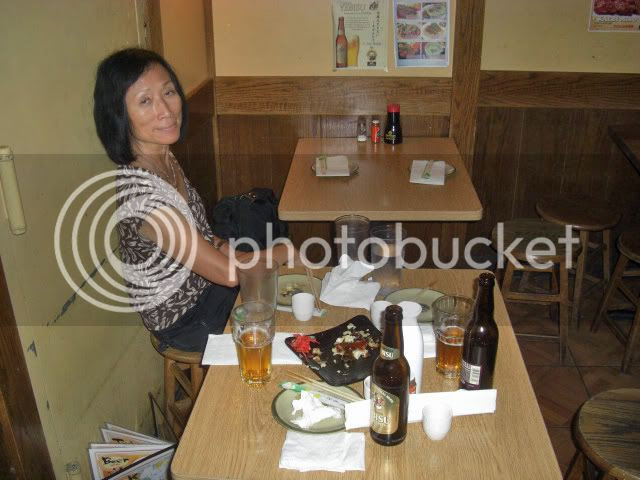 If you are in the mood for a differnt kind of bar food, plenty of sake, and a pretty genuine Japanese pub experience, these Izakayas are a good choice.

Several articles came out in various papers today announcing the amazing (not to me) finding that people who drink tend to live longer than people who don't.  Even heavy drinkers tend to outlive teetotalers.  They are not sure of the reason for this but my guess is that non-drinkers tend to be miserable people who don't know how to have fun and just shrivel up and and die.  Only my opinion, of course.

It looks like I am getting out of town just before we experience any affects from Hurricane Earl.  I guess I will have to queue up the Dixie Chicks "Goodbye Earl" on my way out the door.

My next post won't be for a few days and should be from Berlin.  Until then, skip the vitamin pill and have a Bloody Mary with your breakfast.  You will live a longer and happier life.
Posted by Bar Man at 8:12 AM