Last night was Chinese New Year's Eve, the Year of the Ox is about to begin. 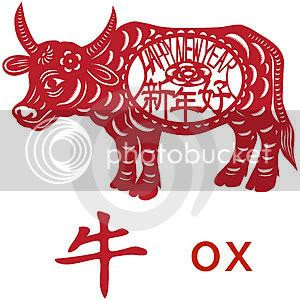 The Mysterious Chinese Woman was actually born in the Year of the Ox (no fair trying to guess her age) so it was kind of obligatory to go out for a Chinese or, at least, an Asian dinner. There is a restaurant not too far from me, Chance, that I have passed by a few times and it looked pretty nice. I figured that would be a nice enough place to go. You can find it on the corner of Butler and Smith, seven blocks south of Atlantic Avenue. 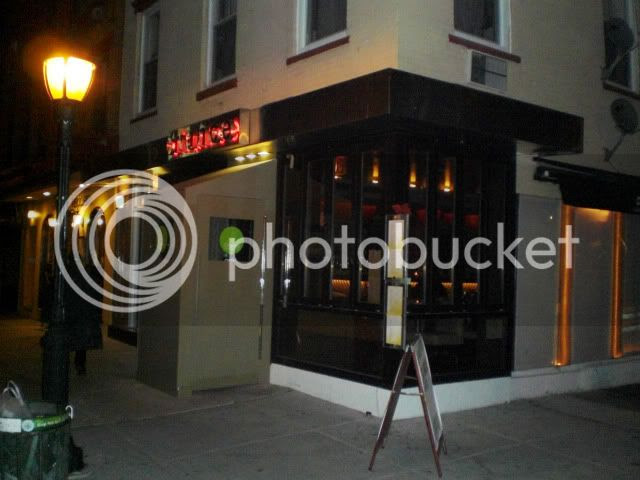 I had actually been in here back in January of 2005 when I was doing my thousand bar march and it was number 94. Here are my impressions, such as they were, from then:

This was an interesting place, an Chinese fusion restaurant with a nice bar in front. It had nice red lights over the bar and a wall of bubbling water behind it. The bartender was a blond guy with dreadlocks, but very friendly and quite competent. He made something called a Purple Haze for a customer and, because he had a bit left over, gave me at taste. Kind of like grape cool-aid and vodka but it was actually made with sake and Chambord raspberry liquer.

I ordered a glass of Shiraz and got a small bowl of wasabi peas and a small piece of chicken. It was happy hour here too and this time, because the wine was good, I did accept the second glass.

Well, it wasn't happy hour this time around, and we sat at a table and behaved like big people. I did start out with a hot sake, though.

Hot Sake On A Chilly Night 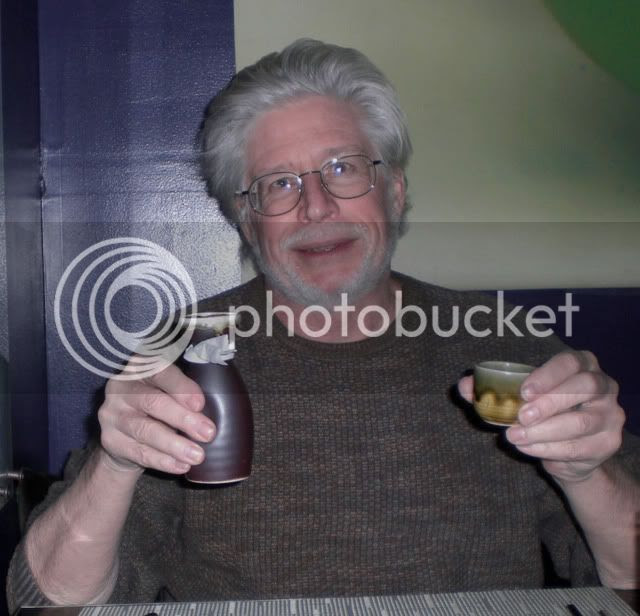 While we were waiting for our order we got a little appetizer. Just a couple of bites, and I forgot what it was. Tasty though.

Tasty, Whatever It Was 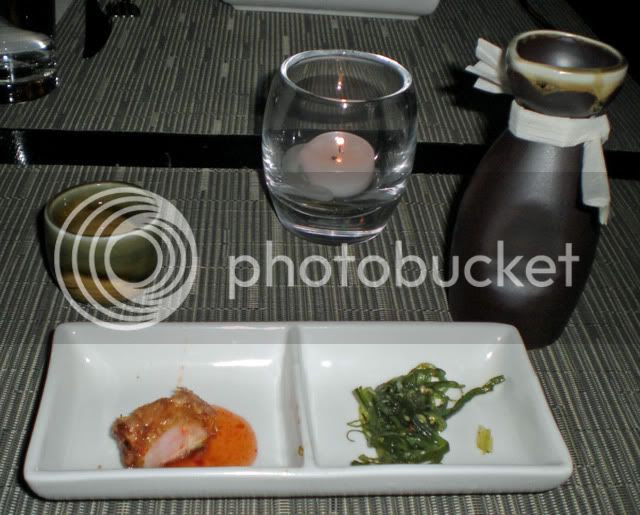 We started out with a couple of appetizers, both of which were quite good. 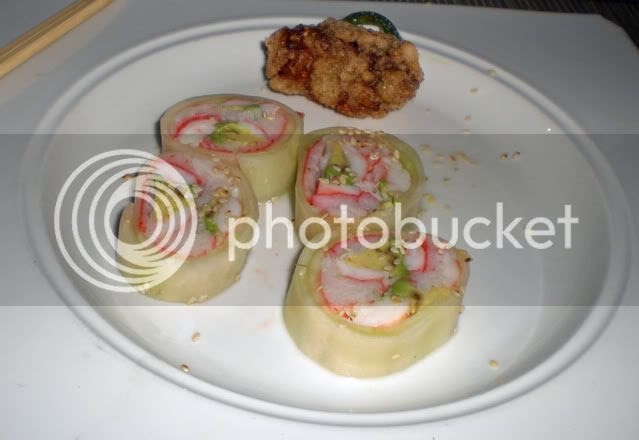 This was crabmeat, shrimp and avocado wrapped in cucumber and flavored with a sweet vinegar sauce. You will also note a breaded oyster at the top of the plate. That was from the other appetizer. 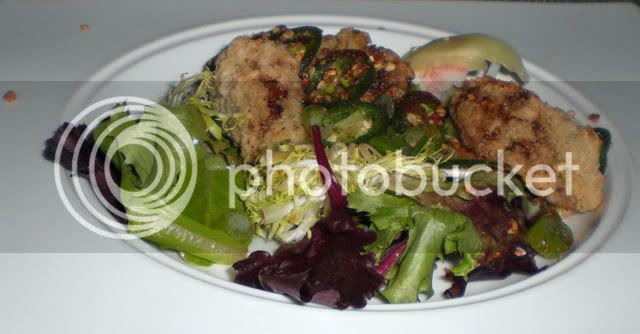 These were served with jalapenos and asian spices and were quite delicious. I would certainly have them again, although they do have a large selection of interesting appetizers. I think I will try the pan-seared scallops with snow peas and mixed mushrooms.

For our main dish we both opted for noodles. The Mysterious Chinese Woman opted for the Chance rice noodles. 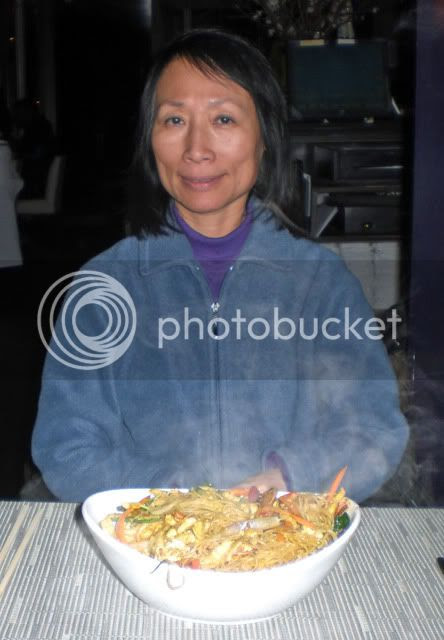 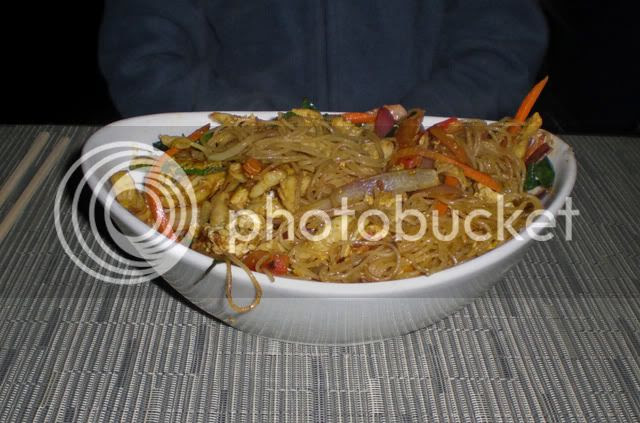 These were quite tasty, and quite spicy. Wok fried rice noodles with chicken and shrimp in a curry sauce. They say a mild curry sauce, but it has a bit of a bite to it. Nothing too overpowering though. And the noodles were very good.

I opted for the crispy pan-fried noodles with beef. 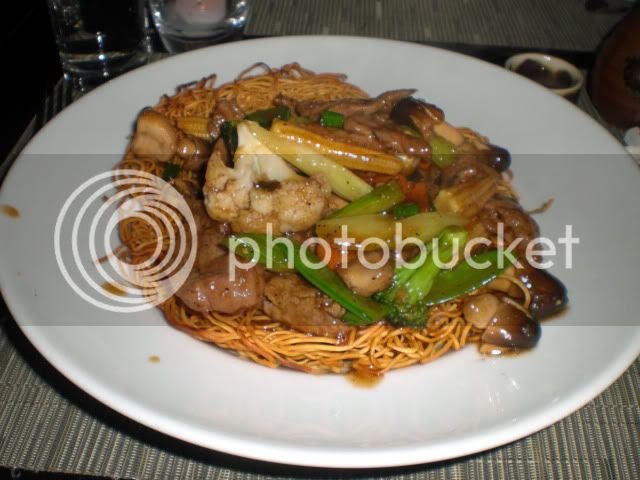 This was also very good. It has very crispy noodles with beef and vegetables in a black pepper sauce. When the dish was first put in front of me I thought the noodles had been overly crisped, but they soaked up the sauce really well and became pleasantly flavored and soft.

The servings were very generous and I had the combined leftovers for breakfast this morning.

The place wasn't too crowded, but people kept drifting in and out so it looked like they were doing a fairly decent business on a cold Sunday evening. A few people also popped in to pick up take-out.

They also have a couple of prixe fixe dinners, one for $18 and another for $28, the Royal Fixe. Lots of good stuff on the menu so I will certainly get back there one day. It was reasonble too. The tab, including tip, was $60 for the two of us and close to $20 of that was for the two hot sakes that I had. The service was very good as well. Not overly fast, but not slow either, and the people were very nice.

Hello!
It is interested very much.
Please link to this site.
http://love-marriage-lover-couple.blogspot.com/