I have been reading about this new whiskey bar that opened in my neighborhood and have been meaning to try it for awhile. When I went to Chance for the Chinese New Year's Eve dinner I walked right by it, so now I knew exactly where it was. My brother-in-law Jim, he isn't too mysterious, is going to be looking in on our place while we are in Mexico. I figured I would treat him to a night out for his trouble and used this as an excuse to head to Char No. 4 on Smith Street.

Char gets its name from how the oak barrels that are used to make bourbon are treated. All bourbon is made in new oak barrels that have heat applied to the inside until it is charred. It is this charring that imparts the flavor and color to the whiskey. Moonshine, which isn't aged, is clear in color. Oh yes, you can get a shot of moonshine here if you want, along with a shot of about three hundred other whiskeys as well.

Whiskeys And Whiskys On The Wall 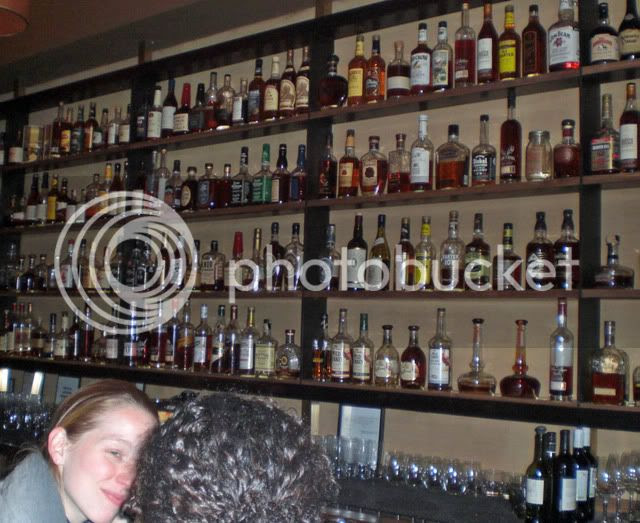 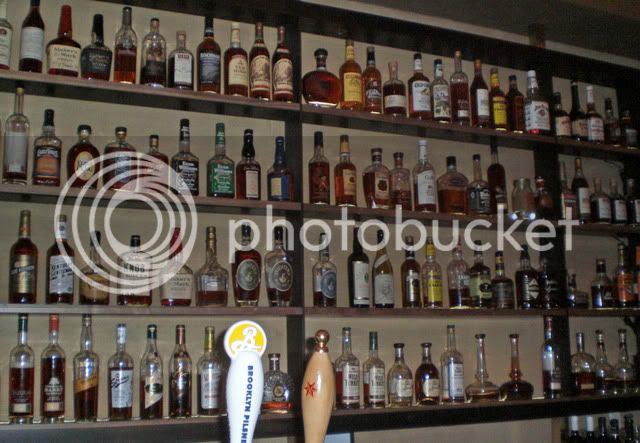 You can have everything from a $3 shot of Ancient Age to a $100 shot of Maker' Mark Black Wax for the Japanese Market. Actually, they even had a couple of whiskeys for $1 and $2 a shot, so this really wouldn't be a bad place to got to if you just wanted a couple beers with whiskey chasers. Not much of a beer selection, but they have one of my favorites, Brooklyn Pilsner, so I would be just fine. 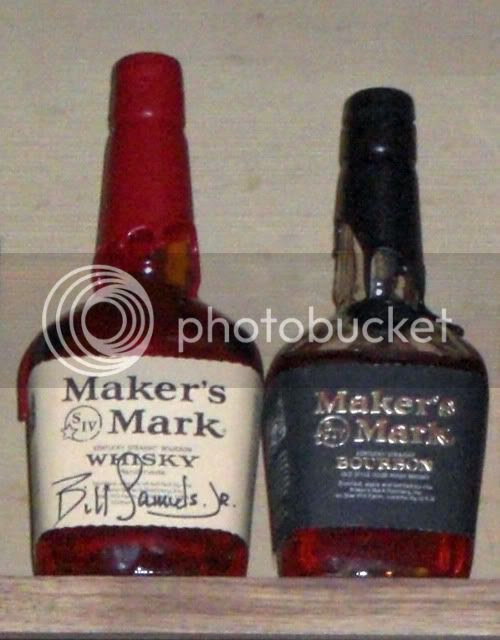 One of the waiters confided to me that the Black Wax was exactly the same as the regular Maker's Mark, that they don't really make more then one kind of bourbon. Not sure if that is true or not, but I wasn't going to pay to do a taste test.

The bottle next to the Black Wax was personally signed by Maker's Mark head distiller. I don't think you could get a shot of that.

I started out with the Wild Turkey American Honey, and this proved to be a mistake. I don't know what I was expecting, but it wasn't this. This tasted more like Jerimiah Weed. Kind of a thick, sweet cordial, but with a kick. It wasn't too bad after I threw a bunch of ice cubes in the glass. Not an auspicious start though. Jim was smarter, ordering Four Roses Small Batch, something he was familiar with.

I figured that for my next one I would just get a straight Kentucky bourbon, and what could be better than a shot of... 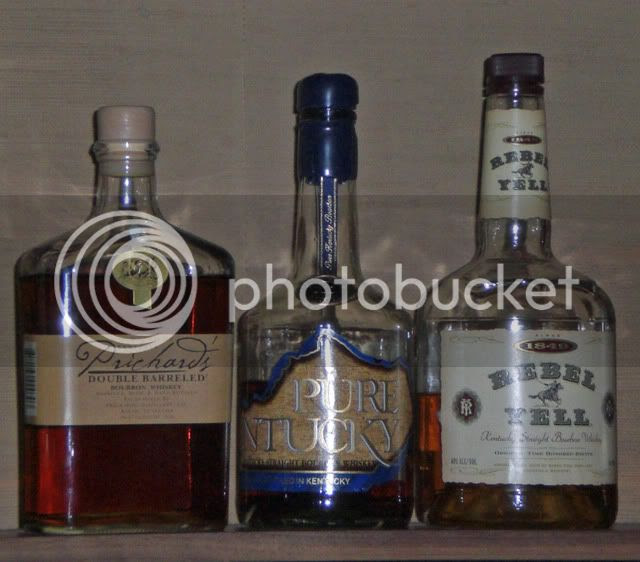 This was more like it, kind of harsh, but in a good way, and flavorful as all get out. Had it with a splash and a single ice cube. Kind of like the British do. Well, the Brits I know seem to just like one ice cube in almost anything they drink. I always suspected that refrigeration costs a lot in Britain.

Jim did want to try moonshine so we ordered a double to split. It was authentic tasting, I will say that. I had my fill of moonshine when I was in the Army and stationed in Fort Gordon, Georgia. And when I say I had my fill, believe me, it wasn't a whole lot. Four or five of us with a quart jar of the stuff that we bought for about two bucks, if I recall correctly. Well, at least I can still see.

If you have never tried it before you really should though. It has a taste that will stay with you, sometimes for days.

My last whisky of the day was a 16 year old Laguvulin, my favorite single malt scotch. Generally I am not a big fan of single malt scotches, preferring a blend such as Dewars or Pinch. But I make an exception for Laguvulin. A big heavy scotch with a really smokey taste to it.

We planned on eating here but it was quite crowded when we arrived at about 9:00 P.M., so we were content to do much of our drinking at the bar, once we managed to get seats. There is a ledge on the wall opposite the bar with stools and they were pretty much full too. Basically it was three deep at the bar. And it is a pretty narrow place too, reminiscent of some of the dive bars on the west side of Manhattan. Or at least the ones that used to be there. Not that this place is a dive though, far from it.

Eventually we got seated though and had a delightful meal. They have a state-of-the-art smoker in the basement and that influences the flavor of a lot of their food. No ribs though.

I will post about the meal tomorrow, so stay tuned.
Posted by Bar Man at 4:49 PM

Cool signature on the Maker's Mark bottle! My husband is a fan of MM. Didn't know they made Bourbon, too. Great post as always. Cheers!

MM only makes one bourbon. It's the same in the traditional label, black label or any of the collector's edition bottles. Learn more about MM at www.VisitLebanonKy.com or www.HeartOfKentucky.com. You should come visit the distillery just outside of downtown Lebanon, Ky. They give a great tour and a tasting at the end. In fact, come travel the Kentucky Bourbon Trail. All the distilleries are within 50 minutes to an hour from Lebanon. You'll have a great time.