Let me simply say this this was a fun day and a lot was done. Will take at least a couple of posts to cover it all. Don't expect too many pictures of mermaids, though. This was the 25th annual Mermaid Parade and to say there was a crowd would be like saying there was a little sand on the beach. It was packed. I read where last year the crowd was estimated at 850,000 and I bet there were more this year.

It has been about three years since I went to my last Mermaid Parade, and man, I was not prepared for this. There was a crowd the last time I went, but nowhere near as large. You could even mingle with the paraders to take pictures. This year the route was barricaded off. But then it would have to be. With this big of a crowd the parade itself would just get lost in it.

It was more fun with the smaller crowd though. I guess what is happening here is what happened to the Halloween Parade in the Village. It just grew and grew and the crowds kept getting bigger and now I just watch it on television. I am still glad I went, though. In fact I think I am going back to Coney Island with friends next Saturday as well.

As always, the trip to Coney Island begins with a subway. I can pick it up just a few blocks away though, and getting there is half the fun. 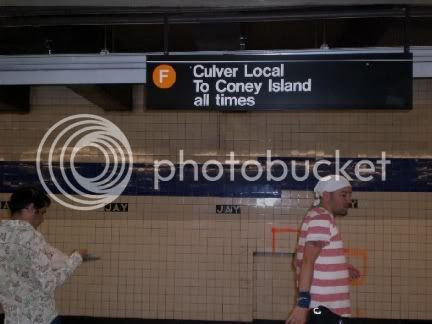 And Here Comes The Train 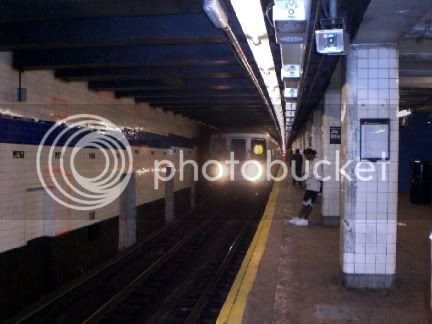 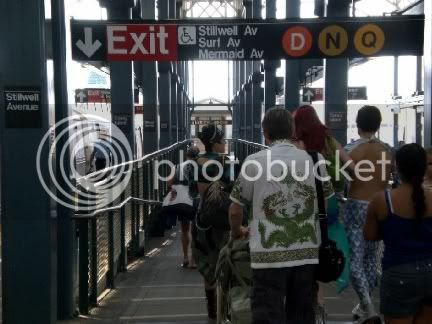 There are plans underway to transform Coney Island into some kind of an upscale tourist attraction complete with shopping malls and hotels. In my opinion, that would be tragic. It would probably end up like the once praised South Street Seaport in Manhattan. A place that is going broke because nobody goes there.

Nothing could ever replace the first glimpses when you get off the subway. A bit garish and tacky but with that seaside amusement park ambiance that is the essence of why you come here.

First Appearances Are So Important 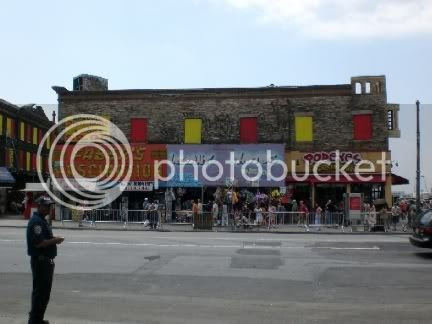 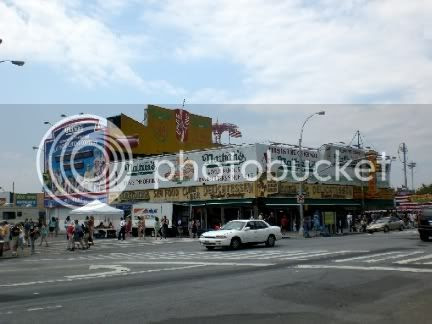 The parade didn't start until 2:00 PM and we got there before noon so we had some time to kill. The crowds hadn't really begun to arrive in mass yet either. As we headed toward the boardwalk we decided to pop into Beer Island for a beer and a bite to eat. 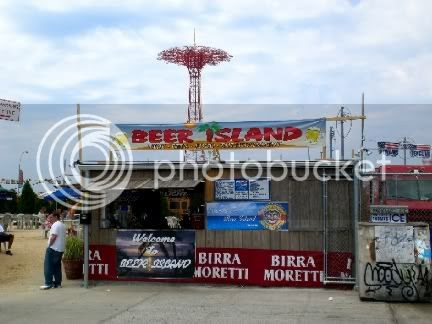 The last time I was here this was a minature golf course and a cheesy waterslide. This is a much better use of the land. It is new this year and is owned by John Ciarcia who also owns the nearby Cha Cha's, a pretty funky place in its own right. John is also known for playing Albie Cianflone during the last two seasons of The Sopranos. 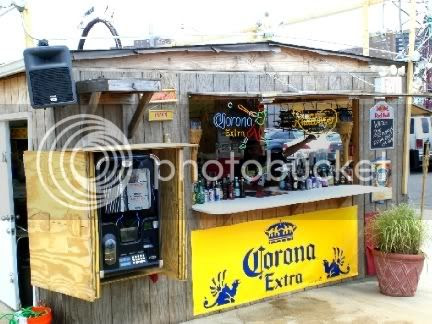 The bar, mostly a serving bar, is small but they have a better than average selection of beers. You get it in a plastic cup though, which I don't particularly like. Given the beach-like atmosphere it seemed appropriate, though. 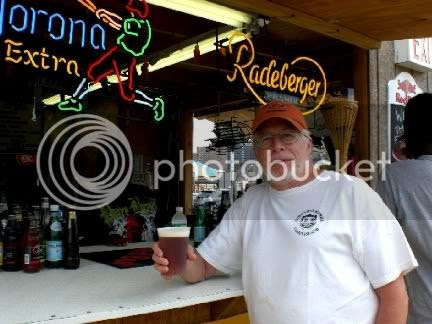 The people here were very nice. Quite chatty and obviously proud of the place. They offered to take a picture of the Mysterious Chinese Woman and me out front. 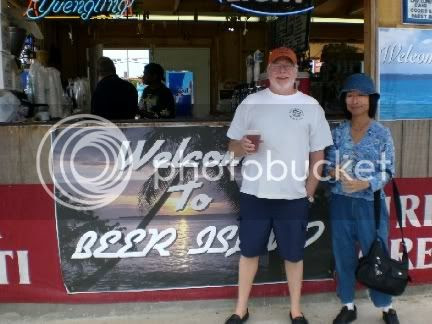 We went and had a seat on one of the beach tables. It was lunchtime and we were getting a bit hungry. Luckily there was more to Beer Island than just beer.

Is It A Mirage 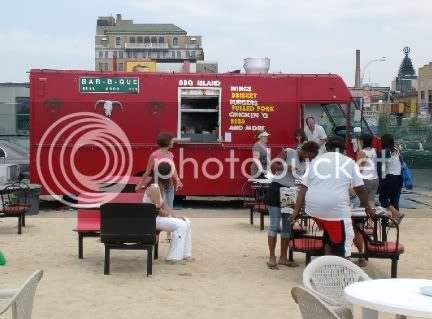 There menu was limited but it had what I wanted, a brisket sandwich. The Mysterious Chinese Woman ordered a pulled pork sandwich. And when it arrived it looked great. 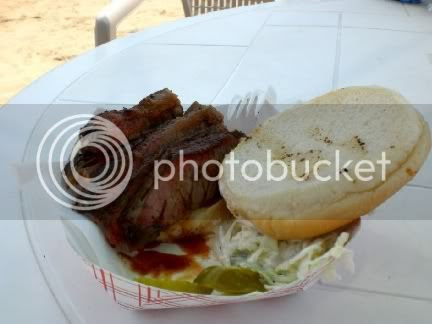 It smelled delightful as well and the only thing left to do was to... 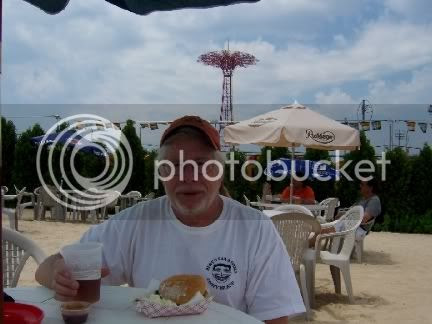 Hey, it was really great. Smooked just right and nicely crisped on the outside. Served on a whitebread bun with a decent side of barbecue sauce, it was well done indeed. If I got this in one of the Manhattan barbecue places that have sprung up I might expect a larger portion, but no better taste.

The Mysterious Chinese Woman liked her ribs too. I thought they were good, and they probably only suffered in comparison to the outstanding brisket.

The coleslaw was pretty lame though.

On the other hand, the staff was almost overly attentive and kind of stepping all over each other. It was pretty interesting and there wasn't much of a crowd. Wonder what it will be like when the parade is over and the crowds disperse. Oh yeah, I know already, I stopped by after the parade.

No expense had been spared to replicate an authentic tropical resort beach.

An A For Effort 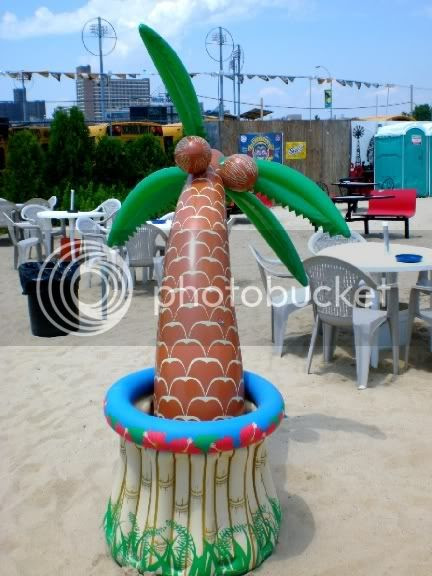 It looked like some kind of a film crew was sitting at a nearby table. Probably for some cable TV show.

A Classic In The Making 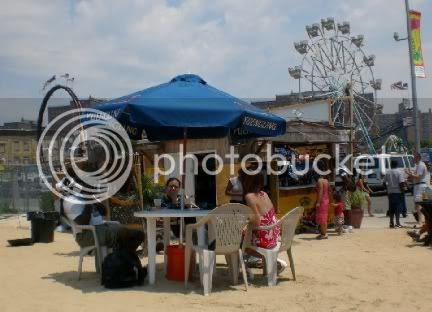 I stuck with the Yuengling but, I have to admit, this ad on the wall by the porta-potties made me thing about switching.

Hmm, Not Sure If I Want To Try It Or Not 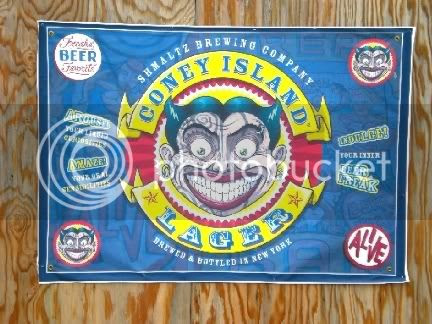 Okay, that is it for today. I am about to head out to a nearby street fair and you will hear about that too.

Oh, I did get some pictures of mermaids, so here is a teaser: 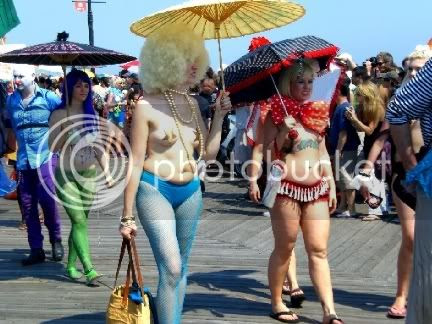