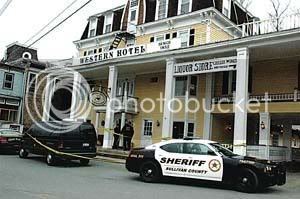 Nearly four days after the shooting at The Western in Callicoon the news about it is sparse indeed. In a small town where, supposedly, everyone knows everything about everything, nobody seems to know, or will admit to knowing, just what happened at the bar early Sunday morning.

What seems to be known is that the weapon was a .25 caliber pistol, old but no antique. Lori was shot near the heart, her aorta was severed, and she bled to death. Besides Lori there were two other people in the bar, Joe Naughton the owner, and an as yet unnamed third person.

So far the police have not arrested anyone nor, apparently, have they concluded whether the shooting was an accident or not. Or, at least, they aren't releasing the information if it is known.

I do find it a bit strange that there is so little information being released about this tragic event. My personal interest lies in the fact that I have spent more then a little time at the bar here, have stayed at the Western Hotel numerous times over the years, and know Joe Naughton fairly well.

The latest news that I have found on this was in the Sullivan County Democrat, which you can see by clicking on the link below.