I went to El Torito, a sports bar, to watch the hated Knicks play the dreadful, but improving, Timberwolves. We won't go into all of the reasons why I, a former Knicks fan, now hate them. Suffice it to say that I am not alone.

I was thinking of wearing my dashing Chivas shirt but never got around to changing into it. That was probably a good thing because Chivas was playing Pachuca, an arch-rival I take it, and there was a large crowd of locals watching the game on a couple of televisions and loudly cheering Chivas on. I am sure if I was wearing my shirt I would have had to have joined them. I probably would have had to drink a lot of tequila as well. I am certain I wouldn't have been allowed to sit and watch a basketball game.

As you can see, Chivas was victorious, winning 2 to 1. 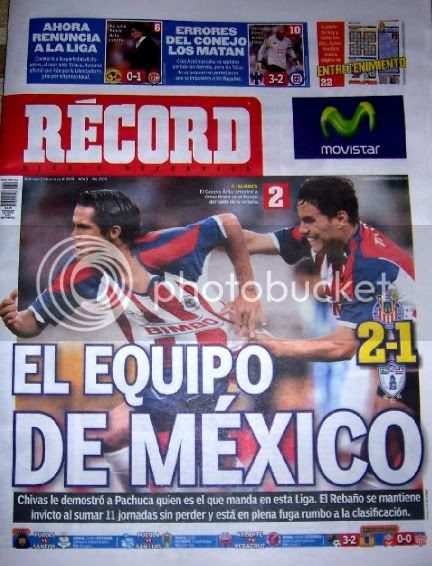 Oh, and the Knicks lost to the Timberwolves 93 to 114. The Knicks have now lost 11 of their last 12, eight of those by double digits and four of them by over 20 points. I would post pictures, but I have to think of the children.
Posted by Bar Man at 4:43 PM

I cant stand it any longer. I am sorry to say I think your Bimbo shirts are really really ugly. They kind of remind me of a Circus tent. Love ya anyway.

Chivas means goats in Spanish and rayado means striped. The team nickname is Chivas Rayado or stiped goats. And the shirts are beautiful.