A Visit From Jim

The Mysterious Chinese Woman invited a friend of hers to stop by for lunch after they had been to the Brooklyn Botanical Guardian making Christmas centerpieces. They both do volunteer work there, usually conducting tours for school-groups. Today was just a fun day. But I was on the hook for making lunch. I did a meatloaf using a recipe from Good Eats, fried potatoes tossed with lemon and rosemary, and boiled baby carrots (hey, everything can't be spectacular). My brother-in-law Jim must have sensed something because he showed up just as the meatloaf came out.

My Half-Eaten Meatloaf's Good Side 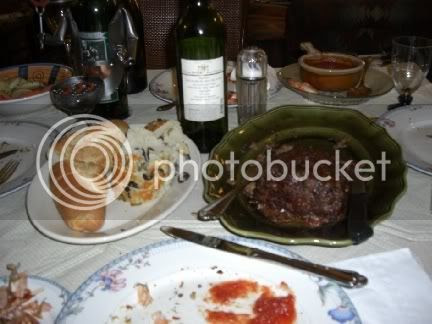 After lunch my wife and her friend wanted to watch some movie she got from Netflix that I had already seen so Jim and I decided to go out for a beer. He had never been to Downtown Bar & Grill so I took him there. They still had all of the beers from their beer tasting available so I had the Midas Touch again. Then we noticed a set of new glasses in wooden stands, kind of like a mini yard of ale. They were promotional glasses for Kwak. 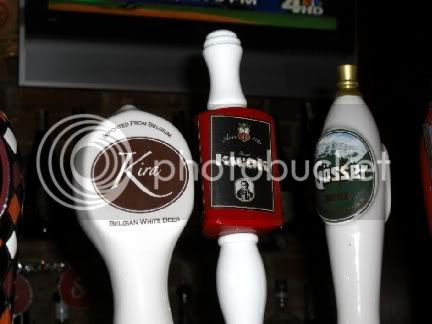 The full name of this beer is Pauwel Kwak and it is brewed by Brouwerij Bosteels in Belgium. It is a Belgium Strong Ale and weighs in at 8% alcohol. The color is a nice golden orange with a good sized head. Has a spicy nose and the taste is spicy as well. Jim thought it was quite hoppy but I didn't really notice that taste coming through.

Kwak In Its Glass And Stand 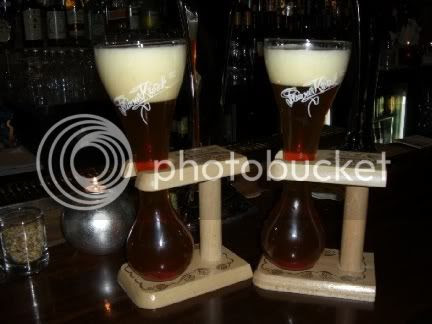 Of course there is a story behind this glass and it is similar to the story behind the yards of ale. Pauwel Kwak was a brewery and the owner of an inn back when Napoleon was still kicking around. The name of the inn was De Hoorn and it was a stop for mail coaches. The coachmen were not allowed to leave their coach and horses unattended so Mr. Kwak had special glasses blown that could be hung on the side of the coach. Well, we didn't have to worry about our coach and horses as we hoisted our Kwaks.

Jim And Barman Hoisting Our Kwaks 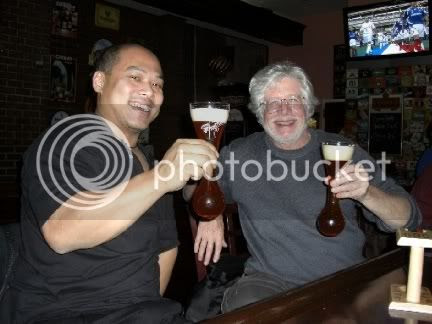 Now the one bad thing about these glasses is that you can only put them back into their stands. The round bottom doesn't allow you to set them down on the bar. I can imagine that after tossing back a few that is a mistake that will be made and mishaps will occur. At least they don't make you put down a huge deposit to use these glasses. Last time I was in Jekyl and Hyde's they made you put down a $50 deposit for the privilege of ordering a quite expensive yard of ale. Really not worth it, in my opinion.

Oh, the story about the yards of ale was that they were designed so that the ale could be handed up to the coachman without him needing to leave his perch.

Bottom Of The Stand 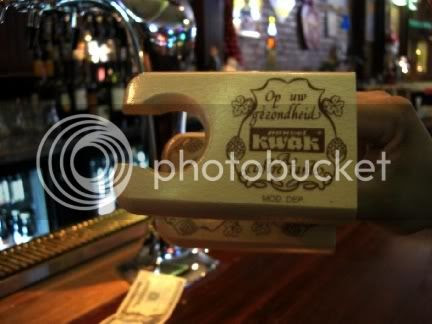 All in all it was a nice afternoon. The beer wasn't bad and had a funny name and a cool glass. It doesn't take much to amuse me. We stopped at the nearby Cody's for a beer and then popped into Queen where I had a couple of excellent Manhattan's made with Wild Turkey and Jim, who was still hungry after eating half of my meatloaf had a beer and a couple of grilled octopus tentacles. I should have taken a picture but, for some reason, forgot. Next time.