The Downtown Bar & Grill, a neighborhood bar that I often visit and have posted about before, held a beer tasting featuring Dogfish Head brews. They had nine of them available and I had already tried four of them before. They are generally good and of the ones that I have had the Raison D'Etre was the strangest. I first had it at Crossroads, formerly the Raccoon Lodge and I described it as being a bit funky and tasting of raisins, not surprisingly. 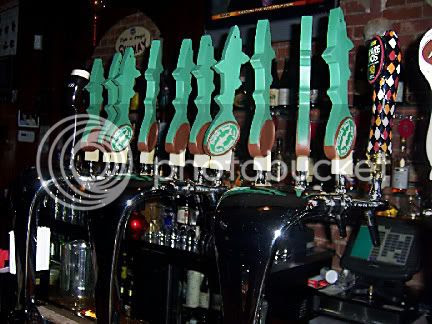 I started off with a Midas Touch, a nice golden colored brew that had a firm white head. It was extremely smooth and almost tasted like a Chardonnay with a bit of mead mixed in. You could pick up a bit of honey in the nose and if you didn't know it was a beer you would think you were sniffing a glass of wine. It is quite viscous, also more like a wine than a beer. It had an alcohol content of 9% and went down very smooth. Not a bad beer at all and if it wasn't a tasting I would have had another.

The gimmick on this one is that the recipe is supposedly based on the residue in drinking vessels found in King Midas's tomb. The ingredients include white Muscat grapes, honey, and saffron. Despite the gimmick, it is a very pleasing beer and would pair well with anything you might drink a white wine with. I bet it would be great with a nice Brie.

Bar Man And The Midas Touch 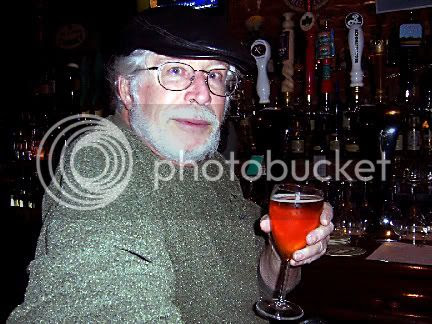 Dogfish Head has no end of gimmicks and the next beer, Pangaea, was no exception. Pangaea, as some of you may know, was a super-continent that existed about 225 million years ago. In fact, all of the current continents were part of it. Pangaea is a Greek word meaning "all lands." So, what is the gimmick? This beer uses one ingredient from every continent including crystallized ginger from Australia, blue rice from Asia, Belgian yeast from Europe, etc.

It had a nose with hints of cinnamon and nutmeg and a bit of earthiness (no pun intended). The first hit on the tongue is sweet but you quickly get hit with a hoppy bitterness. It was a relatively mild 7% alcohol. Not bad, but not one I would go out of my way to order again.

I moved on to a Golden Era AKA Shower. I am not sure if that connotation sells much beer. Well, maybe in some bars. Of course with that in mind I couldn't help but notice that it did look a bit like urine. Not much of a nose, thankfully, but a big woof of hops with the first swallow, and the hops cling. a dry finish that makes you want to take the next swallow. Not bad, but nothing special. This one was back up to 9%.

A Glass Of Golden Era 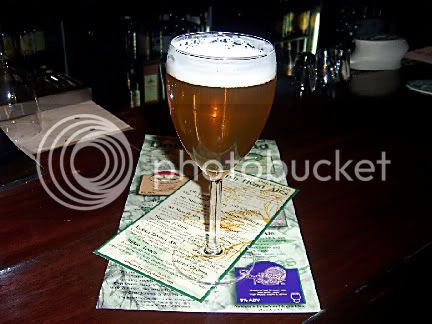 I finished up with the 120 Minute. Now this is the one to finish up with. A rousing 21% alcohol, so it is not for the faint hearted. A couple of guys next to me were drinking the WW Stout a mere 18% alcohol. I passed on that one and sneeringly referred to them as girly-men.

This wasn't anything like I expected it to be. Often times the exceedingly strong beers contain so much alcohol that it overpowers everything else. Not this one though. A nice amber color with a decent head. It was sweet and very flavorful. You picked up a hint of raisins in the nose along with caramel. Coffee came through as well. This would be a good substitute for a port at the end of a meal and would pair well with a stinky cheese. 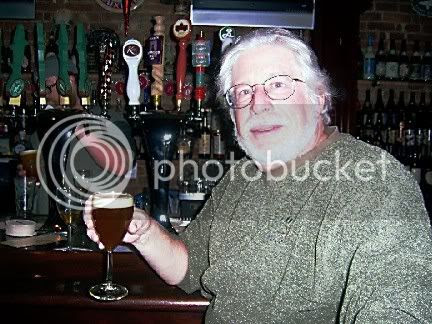 The place had quite a crowd and I will have to say that the bartender, Matt, seems to know almost everyone by name. And everyone seems to know him. I have mentioned him before, a good guy who knows his beers. I only had one complaint. The beers were served in wine glasses, far smaller than a pint and the prices ranged from $7.50 to $9.00. This seemed a bit high because at least some of these beers are routinely available at $5.00 to $6.00 a pint elsewhere. I did get a buyback though, so no real complaints.

I will definitely be on the lookout for the Midas Touch and 120 Minute so I can try them again, perhaps with cheese.
Posted by Bar Man at 10:47 AM