National Geographic News recently had an article about the possibility of a hurricane hitting New York City. They say that forecasters are warning that a hurricane making landfall at or near New York City could cause catastrophic damage in the United State's largest urban center.

While a storm is unlikely to make direct landfall on Manhattan, a nearby storm would cause extensive flooding and heavy storm surges. Homeland Security Secretary Michael Chertoff also warned that a hurricane striking the city could result in destruction on a massive scale.

Needless to say this could cause massive flooding of the subway system, most of which is, and I find this interesting, underground.

Determined to be prepared for this eventuality, the city has begun to place lifeguard stations at each of the subway entrances and exits throughout the five boroughs. This one, in Downtown Brooklyn, has done much to alleviate the concerns of commuters. 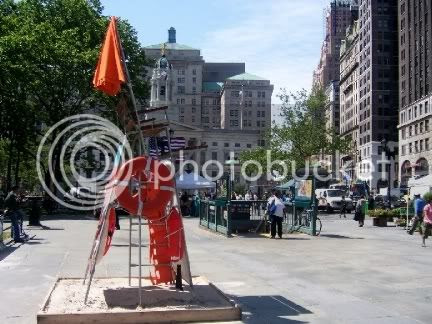 Let it never again be said that New York doesn't respond to threats to its safety and the safety of its inhabitants. It should be noted, however, that several people I talked to felt it would be helpful if there were also lifeguards.
Posted by Bar Man at 10:05 AM