A Trip To Queens

Queens is the borough just adjacent to Brooklyn with a bit of a non-specific boundary. At least few people seem able to agree on exactly where the boundary between Queens and Brooklyn actually lies. It lies somewhere beyond Williamsburg, that’s all I know. I got there by subway and I know that where I got off was, without a doubt, Queens. 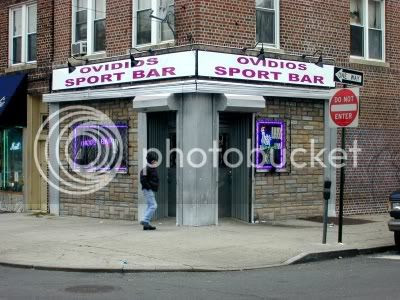 This was my first bar in Queens, on 65th and 39th, one block off Roosevelt Avenue, but it might just as well have been in another country. Not a person in the place, including the bartender, spoke English. Luckily the bartender did understand the word “Budweiser.” It is universal. When I asked how much it was I got a glass.

There is a good-sized bar with a black linoleum top and a wooden armrest in front in this pretty bare-bones place. The only other customer in the place would occasionally break into song, usually when the bartender, who was wearing short shorts, wandered down to his end of the bar. The bar chairs were kind of nice, with light tan bucket seats on metal legs. They spun around but this didn’t seem like the kind of place to be spinning around and shouting “Whoopie.”

There were old wood shelves and coolers with wooden doors behind the bar and a tiered shelf of liquor sitting on top of that. The bottom tier was lit from behind with a blue light giving bottles of vodka and gin an eerie glow. White plaster arches and columns with interesting raised patterns surrounded mirrors that had a strand of purple Christmas trim draped above them. There was a sign on one saying “Trago Pedido – Trago Pagado.” If someone knows what that means let me know. There was an overhang above the area behind the bar with a fine metal grate that had purple florescent lights above it giving it a bit of an other-worldly look. There were two televisions on the wall above the windows in front showing the Spanish version of Fox sports. Interestingly, Fox is also the name of the Mexican president.

Small tables with red table cloths and green vases with red flowers sitting on them lined the wall up by the windows and the wall opposite the bar. The wall opposite the bar is wood paneling above which are mirrors. Half circle red lights hang on the mirrors and on the back wall. There are also some plastic Santa Clauses and white balloons hanging on them. There was also a large illuminated snowman sitting up front.

I had a bottle of Budweiser served with a little napkin wrapped around the top, just like you get them in Mexico. I passed on the glass and just threw a $10 bill on the table to find out how much the beer cost. It was $4. 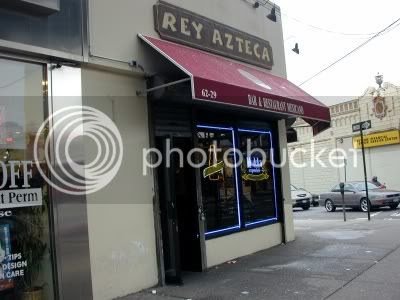 I had to wander a ways before I found another bar that was open. Kind of surprising because this just looked like a stretch where there would be a lot of little bars that would be open all day. It was a nice enough Mexican bar and restaurant with a Venezuelan bartender. The large windows on two sides that look out on a gray Roosevelt Avenue and a lack of heat in the place when I walked in let you know you weren’t in Mexico though.

There was a nice wooden bar with a clear plastic top that covered Mexican currency, bills and coins, and pictures that looked like they were torn from Mexican magazines and newspapers. There was a silver foot rail and black bar chairs. The bar back was kind of plain, just wooden shelves of glasses and tiered shelves of liquor and their selection of bottled and canned beers. They did have quite an extensive selection of tequilas. There is an overhang above the area just behind the bar tiled to look like the roof of a hacienda. Above that was a multi-colored mosaic embedded with beer bottles. There were also a number of small mirrors with wide wooden frames hanging on it.

The floor was a nicely patterned tile. The walls were yellow above wood paneling. On the wall to the right of the bar is a large framed Mexican flag behind glass. On the back wall and the portion of the wall opposite the bar that didn’t have windows were large heavy looking plaster wall hangings with a variety of Mexican designs. There were lots of little tables with tops that looked like distressed copper.

I had a margarita, on the rocks even though I asked for it up. It wasn’t very good, made with one of those sweet mixes instead of fresh limes. On the bright side, the heat was turned on and it was quite cozy by the time I left.

A pretty decent day with two new bars and one new borough hit. This makes 974 bars for the year and leaves me with 26 more bars and one more borough for the year.
Posted by Bar Man at 7:39 PM