Drinks On The Water

As I mentioned last week, when Bernie and I were in Bally Bunion a fellow recommended that we visit his home bar, the Tamaqua Club. at Gerritsen Beach in Brooklyn. It was a good recommendation as you will see. 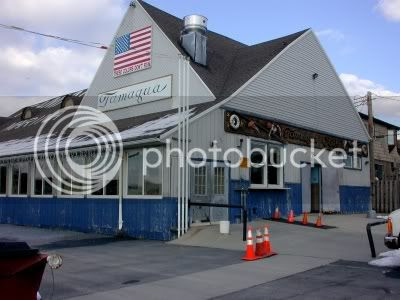 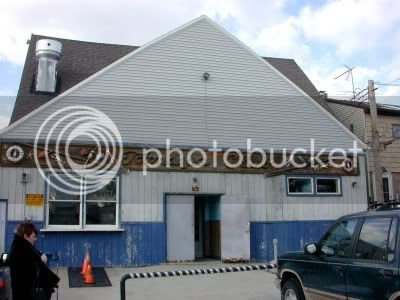 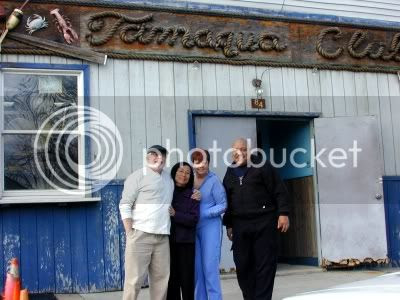 This was a classic waterfront bar and clubhouse that has been around forever, or at least since the 1920s.

Tamaqua Club In The 20's 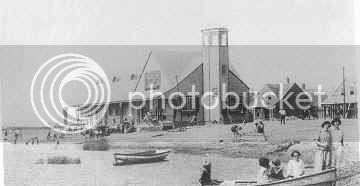 It doesn’t look like it has changed a lot and the people in here seem to like it that way. It is a large place that has the feel of an old VFW or American Legion club. And I don’t mean that in a bad way. Too many of these old clubs feel a need to remodel and a lot of what made them fun somehow seems to get lost. When you walk in here you really feel like you have stepped back in time and certainly stepped out of Brooklyn. It is right on the water and there is a active marina right in front. One of the guys drinking in here lives part of the time on a boat docked right outside.

There is a square bar with a black rippled linoleum top with a narrow wood armrest in front, a wood-grained Formica front, and a black footrest. Seating is a combination of old wood bar chairs and bar stools with well worn, torn and taped seats. There are three beer stations on the bar, two on one side and one on the opposite side. They each had two spigots so not much of a selection, but they did have a Sam Adam’s and some kind of an Amber Bock. The bartender works inside the square bar where there are two wooden cabinets that have green and white diamond patterned stained glass doors.

Kim, The Bartender Who Made Us Feel Like Regulars 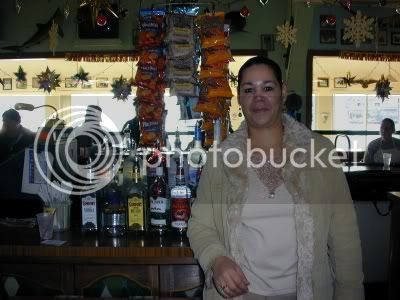 Sitting on top of them are two tiers of liquor and metal racks of little bags of potato chips and, Bar Man’s favorite, Cheese Curls. They do have a kitchen in here but nobody seemed to be eating. Maybe it is more of a dinner place. They seem to host a lot of events here and do have live music on occasion.

There are a couple of pool tables at one end and a foosball machine up against the back wall. Tables and chairs and benches pretty much line the walls and occupy most of the free floor space. There are all kinds of mounted fish on the walls along with photos of the regulars, many of them proudly displaying their catch. 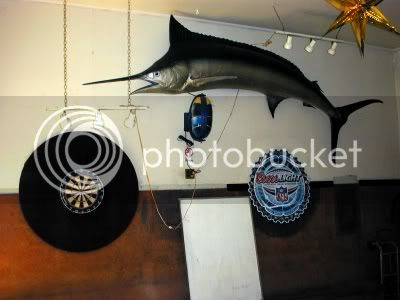 All of the people in here seemed to be regulars, but very friendly.

MaryAnn, Hoping To Join The Regulars 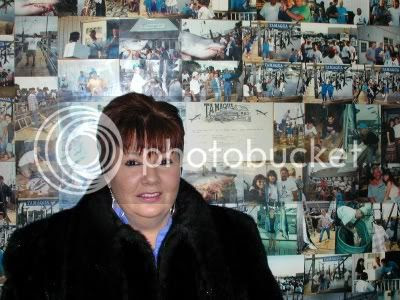 One fellow showed me around the place and gave me a quick run-down of the neighborhood and how much he liked it. I can see why. By the time we left we all felt like regulars too.

The wall next to the water has large glass windows so you can sit and gaze out at the water and the boats. It doesn’t look quite the way as it used to, a bit grimier with more grit, but still has the flavor of an old fishing town. If someone just plopped you down here you would never think that you were in Brooklyn.

The Way It Looked Not Too Long Ago 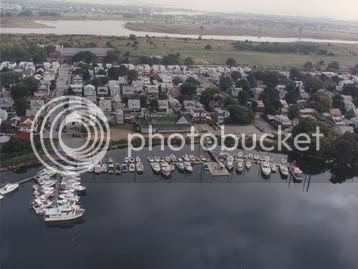 I had a few Amber Bocks and shots of Yukon Jack (beers and shots seemed to be the thing to drink) before calling it a day. I will be back though when summer rolls around.
Posted by Bar Man at 10:15 PM

Awesome blog you have here I will deffinitely be checking
back to see some more great post. I have a blog/website
you might enjoy.

Great blog you have here I will deffinitely be back, I have a website that is about restoring wooden boats

Hi, Thanks for your interesting blog. Keep up the great work! I also have a site & blog about diamond earring
, please feel free to visit.

Pop goes the Housing Bubble? A Florida subdivision -- the Boca Country Club -- characterizes the area, the problem, and the answer. Read more ....

where did the name "Tamaqua" originate for this bar.......I am a Tamaqua girl and wonder if there is a connection to Tamaqua.....