Hey, there are so many great looking bars in this neighborhood that I just had to go back. In fact yesterday when I was at Nice Guy Eddie’s I spotted the three I went to today, one right next door and the other two across the street. Two of the three of them are owned by the same guy that owns Nice Guy Eddie’s and Vasmay. He must like the location. 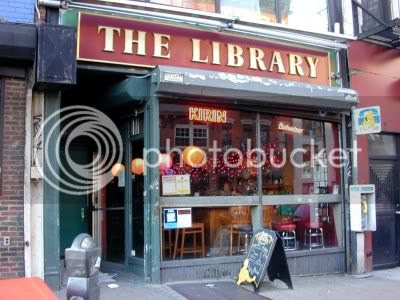 This place is the one right next door to Nice Guy Eddie’s, on Avenue A and just off Houston. It has that standard boxcar shape to it with a long beat-up L shaped wooden bar that has a metal kick panel on the bottom of the sides and a brass rail. The bar chairs are kind of an assorted mixture and pretty beat-up. There are two beer stations, one brass and one silver, sitting on the bar and they have a decent selection of both draft and bottles. Strangely enough though they were out of my first choice of both a draft and a bottled beer. I thought it was going to turn into a Monty Python like sketch for a minute there. Large orange and purple Japanese paper lanterns hang above the bar.

The bar back has got mirrors, a cabinet with old leaded glass panes, tiered shelves of liquor and a pleasant amount of clutter. Down below are cabinets, some with open shelves of liquor and others with old wooden doors and narrow drawers on top. The décor in here is, well eclectic is an appropriate word. On the shelf above the bar are old books, a couple of skulls (one nicely glowing), some skeletal hands, globes in various shapes, strange portraits, a bust of Mozart or Beethoven (I can never keep them straight) one of those heads showing acupuncture pressure points or something that you see in the windows of Chinese pharmacists. Small pink lights are draped over the mirrors and there are large plastic skulls on the mirrors. I was assured that these were not just left over from Halloween. 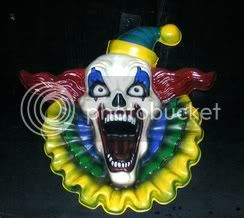 The walls are dark red and a bit grungy towards the bottom. There is a small white screen in the back and the bartender says they show movies with no sound at night. Ah, the bartender. Her name is Jaime and she was quite friendly. That must be a requirement for working in the bars that this guy owns because the bartenders in all of his places seem even friendlier than usual. As I was there an interesting assortment wandered in and out, some even staying for a drink, but mostly to say hello to Jaime. 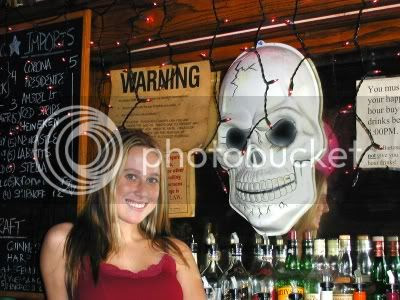 There are more bookshelves on the walls and more little pink lights draped over the one on the wall opposite the bar. Towards the back by the movie screen are booths and more bookshelves and skulls on the wall. Sometimes they have showings of films by local film-makers back there and I was assured they have sound for those. There is a small marble patterned ledge by the window up front with a couple of stools in front of it. The floor around the bar is the same kind of metal as the kick panel and the rest of it is dark linoleum. From what I could see it is a great little neighborhood bar

I had a bottle of Magic Hat #9. The bartender suggested that when I hit bar number 999 I order three of them and have my picture taken with them lined up. I think that is exactly what I will do. 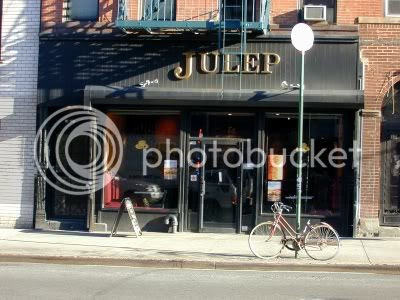 Well, I would go on about the friendly bartenders (this place is the other one owned by the same guy and is right across the street) but I have already talked about this one, it was my, by now, old pal Elisha from Vasmay. 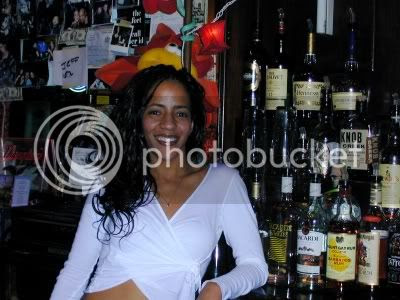 I felt right at home even though it was my first time here. There is a long wooden bar with one of those raised ledges in front and a fairly ornate heavy wooden front. Another cast of characters were sitting at it and once again everyone was very friendly and chatty. If I lived around here I would probably never spend any time at home.

The bar back is old, fairly elaborate wooden cabinets, quite old looking, with glass mirrors largely obscured by bottles of liquor on tiered shelves and photos of customers. Pink and orange feathered boas and strings of small multi-colored square and round Japanese lanterns hung above the mirror. A large plastic alligator eating a smaller one also hangs in front of the mirror at the far end of the bar. Some large fluffy flowers decorated the area around the cash register. Sitting on the shelf above the mirrors are chalk boards listing the beer specials, an old and almost destroyed (the way the should be) accordion, an old green and yellow tow John Deere tractor, the kind a child could ride in, a pair of bodiless legs, and an old suitcase that looked like it had wandered over from Vasmay. They don’t serve food here, but according to a sign on behind the bar they will "Grease UR Turkey on Thanksgvn” with $3 pints and well drinks and $5 wine.

The walls are kind of a pumpkin orange above wood paneling and red padded benches with tables and chairs in front of them. The entry way is glassed in and this forms two alcoves, one on each side, by the windows next to the door. There are benches with tables and chairs in these as well. An old cabinet with frosted glass doors and narrow mirrors on the bottom hangs on the wall opposite the bar. The back wall is old wood with a large scythe and a picture of an old Cadillac hanging on it. Hanging on the wall leading to the back are a series of black and white framed portraits that I assumed were taken by a local artist. There is a pool table in the back with a blue Bud Lite sign hanging above it.

I had a pint of Boddington’s and a generous shot of Bushmills. I could easily have stuck around for awhile but I had gotten of to a bit of a late start and I still wanted to hit the bar next door. 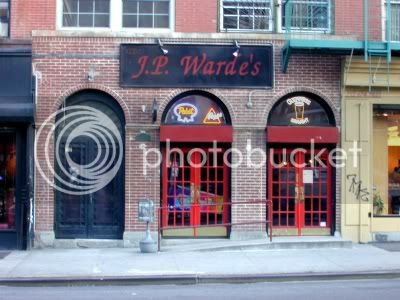 I felt kind of sorry for this place, because even though the bartender was pleasant enough he just wasn’t competition for his neighbors. The place was empty except for a guy at the pinball machine when I got there and stayed that way until one of the guys that was in Library Bar wandered over. We sat around and talked a bit and the bartender joined in so all and all it was a pleasant enough stay.

The day was growing darker though and this bar was very dark indeed. The primary source of light came from red light bulbs in upside-down galvanized tin buckets painted black on the outside that hung above the bar. I think it would be safe to say that you could develop film in here without risk of over exposure. There was a nice sized old wooden bar with a brass rail and old wooden bar chairs. A metal T shaped beer station with a half dozen spigots sits on the bar.

The bar back appears to be fairly plain but, I have to admit, it is too dark to really be able to tell. There are mirrors and tiered shelves of liquor and glasses. Two small carriage lanterns with dim flame-like bulbs flank an American flag partially obscured by beer bottles and a framed J.P. Warde’s tee-shirt (only $15, frame not included). There is an NBA Fastbreak pinball machine up front that was so loud I thought it was going to drive me out of the place. It turns out the guy wasn’t playing it, he was servicing it. Once he was done and adjusted the noise level it actually went quiet. Kind of a strange spot for the pinball machine though, right up front by the windows. Usually you would expect to find it in the back. There was a pretty neat Foosball-like hockey game next to it.

There are a lot of horse racing themed pictures on the red walls above wood paneling. The bartender said that the owner of the place plowed his profits into land in Ireland and had some race horses over there. The pictures on the wall just opposite the bar were strange looking cartoon like pictures that kind of invoked the image of Speed Racer if he was a jockey. They were kind of neat. They were hosting some kind of an art show in here and at least one of the pieces of art was a round abstract painting that had been done by one of the guys that had stopped into the Library Bar while I was there. There is a pool table in the back covered in red felt. The ceiling is sagging metallic gray tiles and the floor is old wood.

I had a Widmer Hefeweizen and a shot of Jameson. They were out of Bushmill and I found out that the reason so many places were out of certain liquors was because of some kind of a strike by the liquor distributors. It had just ended but some of the bars hadn’t gotten their shipments yet. Just as an aside, you may remember the guy in Vasmay who wanted to buy his own bottle of Jagermeister because the bar was out. Well, at least according to Jaime, every bar in the city had run out of Jagermeister. I guess it really is popular. I also found out that it is illegal and there is a big time fine if you a bar is caught buying liquor from anyone other than an authorized distributor and selling in the bar. The distributors really do have a lock. The bottles are marked so you can identify where they come from. Now, I don’t want to imply that there is any collusion between the distributors and our friendly regulators, but on Wednesday night, just before the strike ended, there were at least 30 raids in bars in Manhattan and one of the things being checked was whether or not any “non-authorized” liquor was being sold. Apparently several bars had resorted to trying to circumvent the iron grip of the distributors by buying elsewhere, and they got caught.

Another very enjoyable day. The weather took a turn for the colder but it was an invigorating cold, not that nut-numbing stuff my friends in Minnesota were experiencing. I hit 3 bars for the day bringing the total to 945 and leaving me 55 to go. Tomorrow I will be meeting an old friend (well, I have known her for a long time but she isn't really old just, shall we say, mature) in Hoboken and then on Saturday I am heading up to the Bronx to meet the guys I was with last time I was up there. I plan on resting the old liver on Sunday and then heading back to the Houston Street area again on Monday. There are just so many neat bars in that area.
Posted by Bar Man at 10:41 PM

Great bit of blogging on your site! If you get a chance look at my site bar stools