I am off to Spain today but managed to hit a couple of bars at the JFK before I got on the plane. 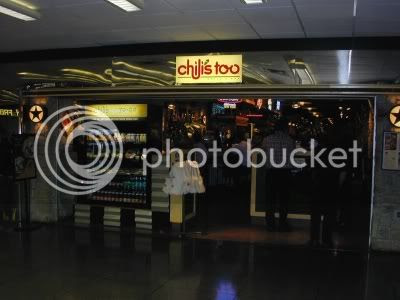 Pretty much a typical Chili's stuck in an airport. I went to a spot in the terminal where there was a cocktail sign, but no cocktail lounge was to be found, just a food court. I like airport cocktail lounges but I am not a real fan of drinking in a Chili's. Ah well, one must make sacrifices. This place was pretty bad though, especially if you wanted a drink. It took me about 10 minutes to get a bottle of beer from the somewhat distracted bartender.

There is just a light blonde bar with bar chairs packed uncomfortably close together. It did have a rail for your foot though, not that you could actually get your foot down to it if you sat on a chair and there was no room to stand. There are mirrors and glass shelves for the liquor behind the bar. Coolers with gray doors are down below and glass bins of ice and beer sit on top. On each side is a silver T-shaped beer station with six spigots each. The wall behind the bar is gray brick and there is a lit up sign pushing Presidente Margaritas. There are two shelves above the bottles with brightly colored plastic cocktails and a few more liquor bottles on display.

I had a hard to get bottle of Heineken 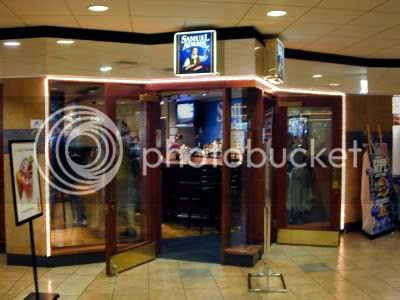 Yep, that is the name of the bar, not just the beer. This bar was much more to my liking even though it served primiarily, well, you can probably guess. Actually Samuel Adams is one of my preferred beers so I had no complaints. The small bar had a top covered with Samuel Adams beer labels under plastic. The front was light wood plywood metal strips fastened to it with silver headed screws. The foot rail was silver as well. Regular wooden bar chairs with black vinyl seats were reasonably spaced.

The wall behind the bar is light blue with a large Samuel Adams emblazoned in white. There is a wel lit cooler to the right side with beer, mostly Samuel Adams Light, and soft drinks. Next to that is a large black and whit cabinet with a black top and black tiered shelves that hold the liquor. Theare are two televisions showing, sadly, the Jets/Jaguars game. My prediction is the Jets win only one more game this season. They really look bad.

There is a large picture of the head of the Statue of Liberty on a column to the left of the bar. You can look out of the windows and see the airplanes and the water beyond. Lots of flashing red lights on the highway across the water. Must have been an accident or a police action of some sort.

I had a Samuel Adams OctoberFest and headed for the plane.

Not bad considering there were only two bars in this terminal. I am now at 826 for the year with 174 left to go. My next posting will be from Spain.
Posted by Bar Man at 8:23 PM

The bars in the Jet Blue terminal at JFK are excellent, by the way. Enjoy the trip dan!

Weeg's right, I was there last month and was quite impressed by the selection of draft beers at the bar. Adios barman!

Hello 1000 Bars, I hope you don't mind me posting a quick note on your blog, would you be looking to book a
Cheap Flight, Car Rental or a Cruise soon? if so try this site Click Here Hotels, Airport Parking and much more are available.

Blackstone, a public company, has a well-deserved reputation as a savvy real estate group. Will their Boca Raton investment blow up in their face? People interested in Boca Raton Homes should Read more ...

Unknown said...
This comment has been removed by the author.
9:12 PM