Today is our day of transition, taking the train from Madrid to Barcelona. This is not one of those ultra fast trains so it is a bit over a four hour ride. We headed out at a reasonable hour and took a cab to the train station. It is quite an impressive train station too with an atrium that wouldn’t look out of place in a botanical garden. 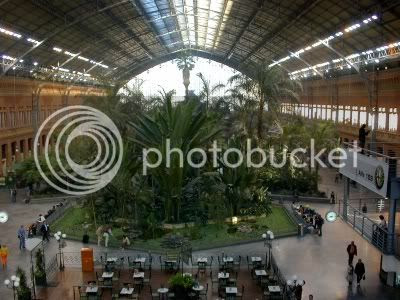 Lots of shops and cafes and it does accommodate the bullet trains that go somewhere, but not, unfortunately, where we are going. 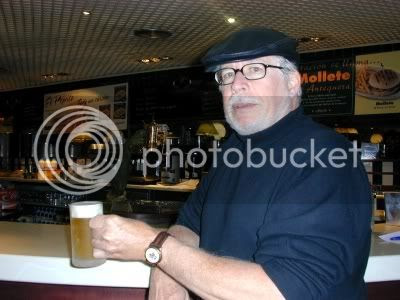 After you move your bags through security (yes, they do check your bags at the train stations in Spain) we went into a bit more austere seating area in the departure area. This area also had numerous shops and cafes though. I did find La Barrila though. This is a large bar/coffee shop with a counter that reflects this. The counter has a white marble top and sides of light wood with metal trim on the bottom and a narrow row of blue and white tiles at the top. There is a silver colored foot rest and brown wooden stools.

There was a beer station with four silver spigots at one end of the bar. The bar I got my beer was pulled from a spigot coming out of a gold stein being held by a hand at the end of an arm emerging from a beer barrel. 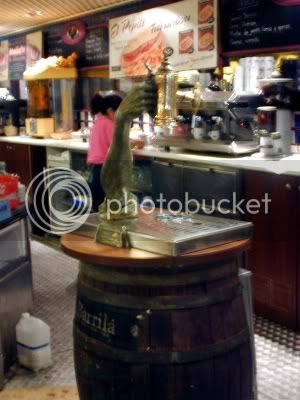 The lights over the bar had rippled fabric shades and were mounted on those complicated pulley contraptions. These worked though because I played with them a bit and managed to bonk my head as a result.

Up front was a shelf with some beer mugs on display and there were a few wine bottles on shelves. Large round white lights hang form the ceiling over the good sized dining area where you could take your food after buying from the counter. They had little tables and also green booths along the wall.

Despite the elaborate dispenser for the beer it only pumped the generic San Miguel. 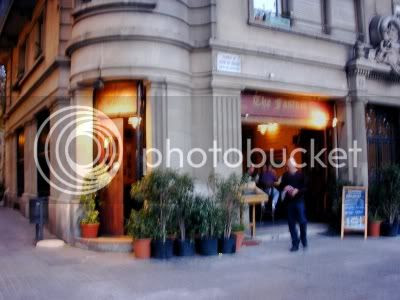 My first bar in Barcelona and it was an Irish bar with a decidedly nautical theme to it. This was only appropriate because it is right across the street from a large boat basin. The top of the bar is thick wood that looks like it has been hewed from a large tree. It is well varnished with a pronounced grain and the edges look like it has the original bark. The front is dark brown wood planking and there is a narrow ledge for your feet. The chairs are brown wooden box-like affairs.

There is a nice set of wooden shelves behind the bar that holds the liquor and an espresso machine. The beer station is encased in wood that matches the top of the bar. There are five spigots. There is an old pendulum clock on the wall above the shelves and there were pictures of old sailing vessels, schooners, I believe, on each side. Further to the left of the clock is a display of nautical knots and a picture of the Alfred Daniels, a ship, and a pen sketch of the bar. I hate to mention it but there is also a Billy Bass hanging above the bar. Bar Man has one of these, courtesy of his sister. A narrow shelf above all of this stuff holds small mugs and little figurines. There is a ship’s bell behind the bar that gets rung whenever the bartender gets a tip.

The walls have dark wood paneling going about half way up with a narrow ledge on top of that and trim on the bottom that matches the top of the bar. The rest of the walls is pale orange. There are pictures of the waterfront and an impressive series of pictures of a huge wave lashing o lighthouse. There are a few models of sailing ships, a porthole on the wall, and plenty of beer signs. There little spotlights over the bar but more interesting copper shaded lights hanging from the ceiling elsewhere.

I had a bottle of Estrella Damm, a beer, and then we headed to one of the numerous waterfront restaurants that ringed the boat basin.

Just two for the day bringing my total to 846 for the year and leaving 154 to go. I am looking forward to checking out more of the city tomorrow.
Posted by Bar Man at 10:38 PM

I just came across a great gardening website called AtlGardening.com*. Not only does it feature articles for the gardening enthusiast, but has become a great gardening web site
resource for me in my landscaping effort. The webmaster of this site has recently added a book section that seemed to expand everytime I go there.
What I like about it is that I get instant access to the book and don't have to wait for the book(s) to arrive which of course saves me money.....no shipping charges.... in some cases. Great idea. I love it. You must check it out today. Let me know what you think.

Roberto Iza Valdés said...
This comment has been removed by a blog administrator.
2:44 PM

Roberto Iza Valdés said...
This comment has been removed by a blog administrator.
1:52 PM

I'm always glad to see other people who have their own blogs about wine or beer. I am a big wine fan myself, and maintain my own wine blog at www.pinotgris.net
Stop by and check out my blog, and keep up the good work!

Last month I made $12,124 with Google Adsense...Click
here for free on how you can do the same!

Roberto Iza Valdés said...
This comment has been removed by a blog administrator.
3:00 PM

I just ran across your site and enjoyed reading through everything.

I'm trying to get a blog going on my site too. But I dont think i have the patience to do it!

Hey. Just browsing getting some ideas for my site. If your interested you can visit my site. Payday Loans , Cash Advance

Hey. Just browsing getting some ideas for my site. If your interested you can visit my site. Payday Loans , Cash Advance

Juno-Regina said...
This comment has been removed by a blog administrator.
10:52 PM

Fantastic blog you got, I will be soon to check out your newest posting. In the mean time I have a blog/website you might enjoy.

Fantastice blog you got here, I will deffinitely be back to see the updates you have made. I have a website that you might find interesting. It pretty much covers
child life insurance

Get cash out when you refinance your home mortgage. Best loans online

Unknown said...
This comment has been removed by the author.
9:10 PM