Tailgating Your Tail Off

Ah, a day off to rest up before bar number 750. So what better way to do that than to get to Giants Stadium at about 2:00 P.M. so you will have ample time to tailgate before the Jets play the Vikings at 8:00 P.M. A six hour stint is just about right, and you don't have to worry about finding a parking spot, or even paying for parking, for that matter. 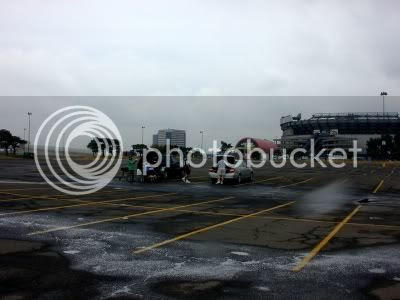 Needless to say we waste no time preparing to prepare. 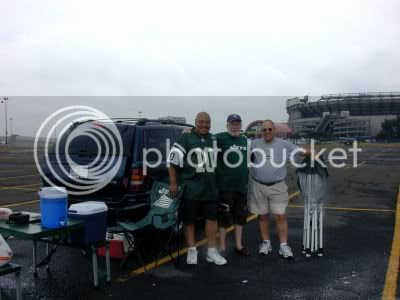 Of course, I don't want to imply that there wasn't anyone else in the parking lot, we did draw quite a crowd. 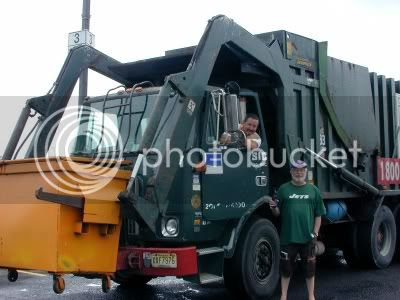 He was just delivering the dumpster for our empties. The Porta-Potty man showed up a bit later. We have all the comforts of home.

Once we got the tent set up we did get a couple of visits from the Parking Patrol who told us we were only entitiled to one parking spot per car. You can see how crowded it was and how we were depriving others of a place to park. 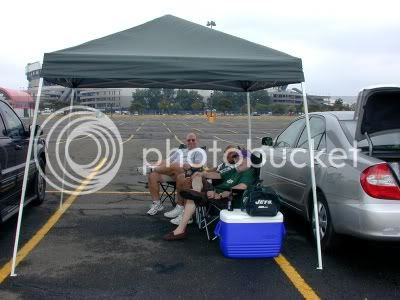 Actually they were pretty decent about it, simply telling us that their boss sent them over. They didn't actually make us move though, so we just settled ourselves in for the long haul. Being from Minnesota I wore a Vikings hat and a Jets shirt, but I put my money on the Jets. Sorry Bob (Minnesota Bob, not Jets Bob), you owe me a tener. The Jets won 28 to 21 in a sloppy game, as most pre-season games tend to be.

We had sangria (my new specialty, the rum gives it a kick) and beer, sausages and muffulettas (a sandwich I first tasted in New Orleans, and one to die for). Not quite up to our usual fare (chili, egg and bacon sandwiches, roast turkeys, baked zitti, sweet potatos with rum soaked raisins (another of my specialties) and much more), but a damn good pre-season warm-up and, kind of like stretching before exercising, a good preparation for Bar Number 750.
Posted by Bar Man at 10:02 PM

Find out how your company rates by using a little known rating system!

Is your company a Scam, Dud, Scheme, Fraud Or Good Opportunity?.

Hurry you may NOT be happy with what you will find!

What a great blog on Tailgating Your Tail Off . we read the comments and it was fun. we welcome you to our sites at No Fax Payday Loans & Fast Loan and place of piece of your knowledge on it. Your comments will brighten our blog.

Super blog. I web surf when I have the time for
blogs like this one.Your site was nice and will be
visited again!
Sweetie, go and search my cash advance cleveland ohio blog for what you need.

Are you tired of getting nice compliments on your blog, when really you're not makeng the kind of money that you deserve? Now you can join a completely FREE program. No buying and No selling. FREE to join. All you do is refer customers. To get started fast, click here: make money while you sleep site. It pretty much covers make money while you sleep related stuff and it's FREE to join.

Hi my friends! I'm writing to you because I just came across a business that I think has great potential. It lets you save money on almost everything. Make money from almost everything, Including home loans- plus... help lower your taxes--best of all--it requires absolutely no investment. I thought you might be interested and like to check it out...