Back In The Saddle Again

My nephew Charlie left yesterday after several days of intense sight seeing that took in Coney Island, Brighton Beach, Central Park, Times Square, Greenwich Village, Battery Park, the Staten Island Ferry, cheesecake at Junior’s, the Museum of Natural History, the Aquarium, the Subway Museum, hotdogs on the street, visits to some of my favorite restaurants (Pete’s Waterfront, Tabac, Armando’s, La Palapa Rockola), and I am sure much more that I cannot remember. We had a great time, but I needed to get back on track. However, I thought I would just ease into it and hit a few places close to home. 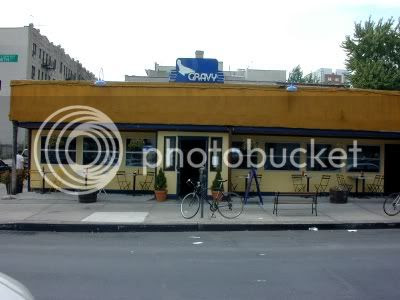 I spotted this place a few days ago on the corner of Smith Street and Pacific Avenue. It is owned by the same people that own Pacifico, an interesting Mexican eatery on Pacific and has a similar funky feel to it. It just opened a few weeks ago but I suspect it might do very well. It is configured a bit like a rustic diner. The bar has a tan Formica top and a white ceramic brick front. The blue linoleum foot rest matches the round vinyl seats on the chrome fountain-like stools. A single silver beer station has only four spigots but three pretty unique beers (the Bud Light is not so unusual). They have Munchner Kindl Hefe Weizen, Whitebread Pale Ale, and Radeberger Royal Pilsner. I shall have to make a couple more visits to sample them all.

The shelves behind the bar were just old wooden soda and fruit crates sitting on metal coolers and shelves for glasses and beer. The glass my beer was served in came out of a cooler and was nicely frosted. My beer was served up by the cheerful bartender Raymond who introduced me to his co-worker April. 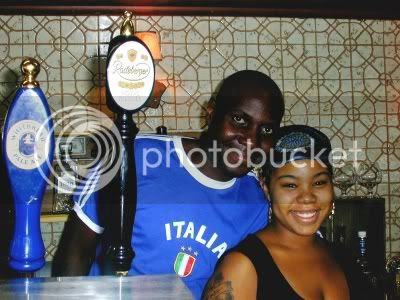 Little lamps with fabric shelves mounted behind the bar give off a soft orange glow. There is a small, unobtrusive television tucked into one corner behind the bar.

The floor is green mosaic tile. The walls are wood paneling and half the ceiling covered with narrow wood strips with industrial-like fluorescent lights. The other side of the ceiling is a slightly curved pea-soup green with round, somewhat dome-like, lights. A narrow strip of matching green separates the two sides of the ceiling and has recessed spot-lighting.

Plush burgundy booths with pale green tables line the wall opposite the bar. That wall is mostly windows and adds to the diner-like feel to the place. Four tables with chairs to the left of the bar complete the dining area although there is an adjacent kitchen and dining counter next door that you can enter either from the street or through a side door from Gravy.

Tucked into one corner is a small fireplace with, yes, a mounted deer head. 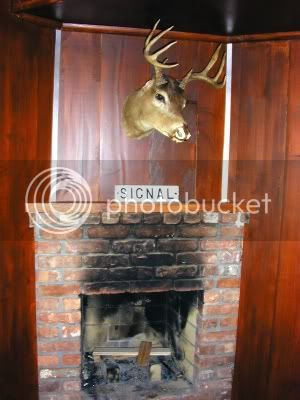 Pictures of New York, a couple of prints of an English fox hunt, and a framed montage of old ads grace the walls. There is also a nice outdoor area for drinking and dining that looks like it would be a fun place to spend a summer evening. 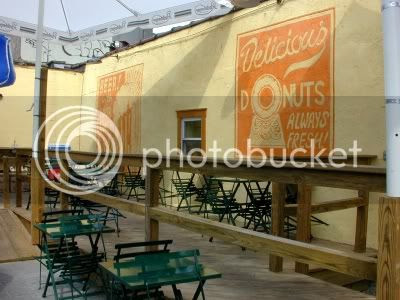 I had a draft Whitebread Pale Ale, one of my favorites, and one you do not see on draft all that often. 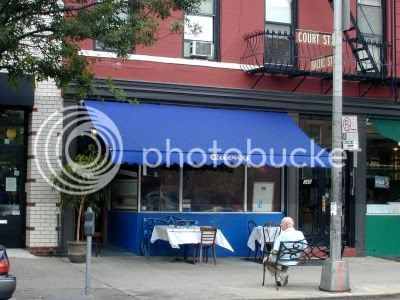 Now this place on the corner of Court Street and Baltic Street (why it is Baltic Street and not Baltic Avenue I do not know) has been around for awhile and I don’t know why I haven’t stopped in before. Maybe because the bar is quite small, only four stools. The top and sides are kind of a simulated wood-grained plastic top and front. The four stools are black iron rods with round black vinyl seats. Large panels of mirrors behind the bar with a shelf for a small selection of liquor. Glass shelves flank the mirrors and these hold glasses, an old coffee-grinder, and a large statue of the Virgin Mary. Two large vases holding plants sit on the already somewhat crowded bar.

The floor is large blue and white squares of tile and the ceiling is a white patterned metal with a white cooling and heating duct running down the center. The walls are rose with exposed brick on each side of the bar. Small tables and chairs with a couple of red padded banquettes along the walls give the place a nice cozy, in a rustic French countryside kind of way, feeling. The menu sports a nice selection of wines that are thought were very reasonably priced. The food menu looked pretty good too, but then I was getting kind of hungry.

There are little lamps mounted on the walls and a large framed mirror on the back wall that is adjacent to the doorway to the kitchen. One large painting of a rustic landscape hangs on the wall to the right of the bar. What looks like a wood-paned window is on the other side of the kitchen door. A rustic wood shelf and cabinet with knick knacks complete the ambience and there was French jazz playing in the background. It looked like a nice romantic spot that I can take the Mysterious Chinese Woman to the next time I have to atone for something.

I had a Tanqueray and tonic.

Easing back into the game I hit a comfortable two bars today bringing the total to date to 753 and leaving 247 to go.
Posted by Bar Man at 6:36 PM

Hello, You're blog is really cool. Although I have no idea how I got here since I was looking specifically for tiffany floor lamp but anyways thought I would say hello and drop you a line. I appreciate the great info.

I was looking for blogs referring to Dallas and found yours. Great blog! I'm in Dallas and here's some info about me

I really like your mopar related blog site. I have a mopar related web site at mopar. If you're into mopar. You will want to check it out.

Great piece of blogging. Glad I accidently found your blog. I would love you to visit this site kitchen stools and tell me what you think.

Loved the site. Very interesting reading :-) I like this site kitchen stools