My nephew Charlie is visiting this week so Bar Man hasn’t been making his appointed rounds while showing him the sights of New York. This was planned downtime so today was a bit of a bonus. After visiting the Museum of Natural History we decided to take a walk through Central Park. Somehow or another, either despite the Mysterious Chinese Woman having a compass, or perhaps because of it, we managed to get lost. Luckily we found a body of water and men (and women) who had gone down to the sea (well, a little lake) in boats. We followed the waterline and, lo and behold, up sprung The Boat House. 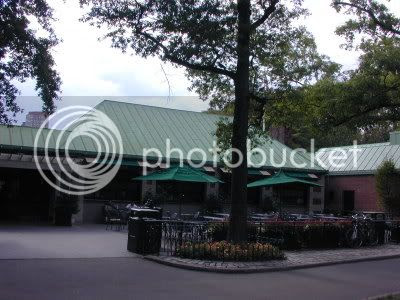 Quite an attractive bar and restaurant sitting right on the lake and adjacent to where you can rent boats. 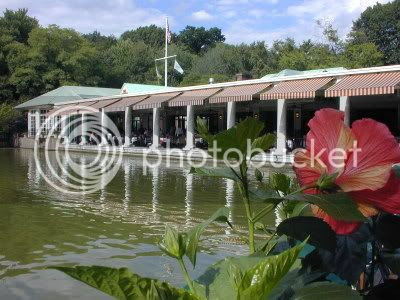 There is both an indoor and an outdoor bar but we didn’t see the outdoor one until after we had a drink indoors. The bar itself is a fairly square dark wooden affair with the bartenders station in the middle. A small selection of liquor sits in the center on tiered shelves and looks a bit precariously perched. I think it might be mainly for show with the liquor actually used stored underneath the bar. The view is certainly pleasant enough and would be even nicer if you sat at a table outside. 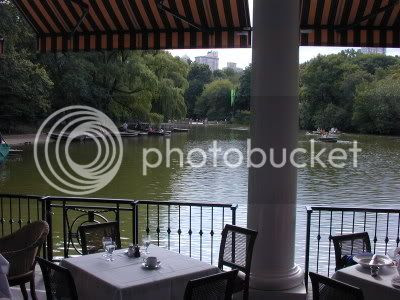 Despite the pleas and tears of the Mysterious Chinese Woman, I explained that, as an Apprentice Bar Man, Charlie had to drink his Coca Cola at the bar. 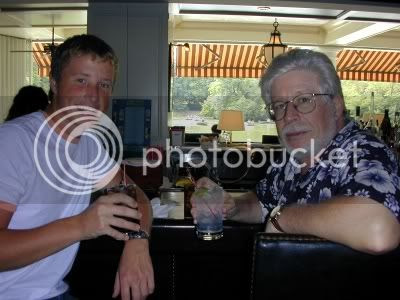 It is always hard on the women to see the children made to suffer for a greater good. 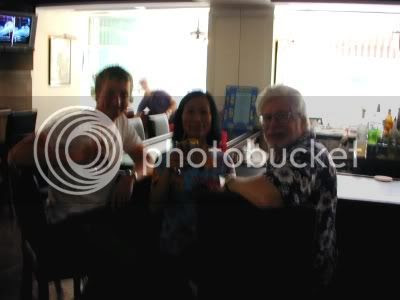 Charlie soon saw some of the benefits of becoming a Bar Man, however.

Nylee, The Dispenser Of Libations 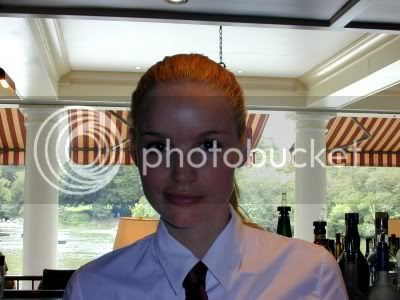 There is a nice fireplace against one wall and ample indoor and outdoor dining areas. The outdoor bar looks like the better bet for a drink on a lovely day such as it was, but it was not to be. Perhaps next time we get lost.

Just one drink for the day but it was, as I said, a bonus. This makes 751 for the year and leaves a mere 249 to go. My next milestone will be bar number 777 on September 12th at F R Woody’s Pub up in Ranier, Minnesota, so I can kind of coast a bit until then. Woody is also the proprietor of Woody’s Fairly Reliable Guide Service.
Posted by Bar Man at 7:28 AM

Perhaps this has been asked and answered already, but do you have a scheduled ending date? Or will you just get to #1000 when you get there? I know you gave yourself a year but you seem to be ahead of schedule, so I was wondering if you'll slow down to hit your target date on the head.

Chrissie said...
This comment has been removed by a blog administrator.
8:23 AM

Unknown said...
This comment has been removed by a blog administrator.
8:50 AM

The Ping King said...
This comment has been removed by a blog administrator.
9:08 AM

Are those comments BLAM? (blog spam?)

The Boat House is a cool place. We try to get there once a year, usually in the fall for Tiki Barmaid's birthday. This past winter we were there after visiting The Gates (known to one in our party as "The Howard Johnson's Curtains") and Cristo happened to stop in. Whatever you think of them, it got a lot of people into the City in February. I'm sure The Boathouse liked them.

Not so secret nugget: A scene from When Harry Met Sally was filmed at the Boat House. Obviously not as famous as the "I'll have what she's having" scene.

I deleted three Blog Spam postings. When I find these I will remove them immediately.

Where the heck is Rainier Minnesota? Anywhere near Fargo North Dakota? If so, I'll meet you at my favorite bar, "Duffy's."
I'll buy the first round.

Currently my plans are to hit bar number 1000 in a place called The Vanilla Room in Sydney, Australia. I will keep everyone posted as the date draws nearer.

Ranier is a town just outside of International Falls in Northern Minnesota, right on Rainy Lake. You could swim to Canada from Woody's dock if you wanted to do so. Just a hop, skip, and a jump from Fargo.

Yes... that is a good perk of becoming Bar Man.

1000 Bars ,I just installed a wood stove in my basement.Outside I installed a new patio and ran the stove vent pipe out the basement window.I had the patio guys concret the window in with the vent pipe.I purchased a wood burning stove myself online Ventless Fireplace.Looking forward to using it and saving on the cost of using gas. Anyway take care until next time ...

Great blog you have here I will deffinitely be back, I have a website that is about restoring wooden boats

Real estate experts watch "absorption rates" closely. It's a time-tested yardstick for Boca bargains. Does it prove that the Housing Bubble has already popped? Read more ...

Energizing blog. It blew me away and I loved your
site. when I have the time to surf the net, i try
finding blogs as good as your site.
If your look to uncover information, please visit my blog

Your blog seems to be a perfect guide in helping opthers to develop a blof of there own. i have taken some tips from it and i hope to implement on my blog. thanxs for the help . regards . quick payday

the good thing about your blog is, its natural. Appreciate your views and added my comment on it. keep it moving and have a great blog. cheers !!!! quick payday loans

Great blog. nice piece of information on it. Taken some help from it in creating my own payday loan online blog. thanxs for the help.

Your blog seems to be a perfect guide in helping opthers to develop a blof of there own. i have taken some tips from it and i hope to implement on my blog. thanxs for the help . regards . Payday Loan Online

the good thing about your blog is, its natural. Appreciate your views and added my comment on it. keep it moving and have a great blog. cheers !!!! payday loans

hey what a nice site . your blog is great .

how do you come with so many ideas. i am trying to write on my payday loans , but can get much out of it .
hope this helps me out. thanxs

knowledge of the subject is great and its fun to read here. payday loans

I can't believe this. I set out to get some ideas on my new site.. you know themes, color, layout, etc.... and I can't believe how much stuff I've found looking around. I'm liking some of the stuff I see here... some good ideas at least. I'm not sure if I want to go with normal blue underlined links or if I want an entire theme of colors for all of the text and the links too. Anyway, nice page, it gave me something to chew on. If anyone actually sees this and feels like it, you can check out my site. stone fireplace

I feel silly now.. had no idea blogger had so many blogs. I guess I should have figured since I found out it is owned by google. I thought I'd be the only one out there. Thanks for the site.. here's mine >>> gas fireplaces