A most interesting day today. A crew from MSNBC followed me around to shoot a segment for Countdown with Keith Olbermann. I believe that it is scheduled to show tomorrow evening. I will certainly be looking forward to it. I picked the bars in advance so the ones we frequented were all counters. Needless to say we were warmly received everywhere we go. A camera crew and the chance for publicity has that affect. Nonetheless, the people were all genuinely nice and I found three places I may very well return to one day when time permits.

Because I was a bit busy with the film crew (walking into and out of bars, setting up shots, and being interviewed) I didn’t have much time to take notes. Luckily the Mysterious Chinese Woman showed up and helped me out. If you check out Olbermann’s show you might catch her on camera. 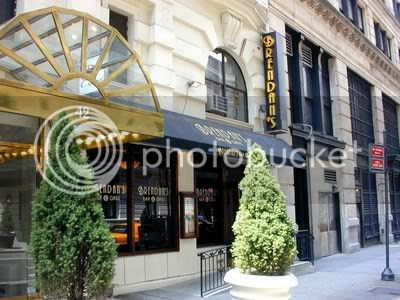 On 42 West 35th Street is this handsome , classy bar and grill built in what was the lobby of the former Hotel Gregorian. Opera music was playing as I entered. Cool, set the stage for the play that was to begin. The bar itself is very long and made of dark wood with a black marble top and the good old brass rail. Two tall roman columns soar up to the high ornate ceiling. The walls of the restaurant are decorated with pictures of the various rooms of the old hotel. Large bowl like hanging lights provided the soft lighting. There is a huge marble fireplace in the dining area and tall, stained glass windows. Large bouquets of flowers decorated the window sills. An ornate wrought-iron staircase leads up to the second floor dining area. The staff was most gracious and the aromas from the kitchen were most inviting. This will be a good place to return to for a meal one day.

I had a draft Boddington’s Ale, well poured and most satisfying. 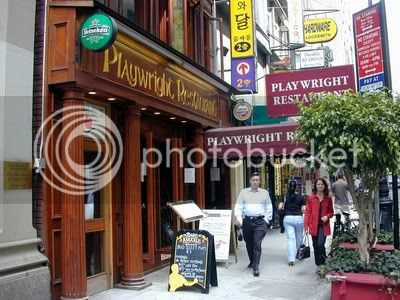 There may be a bit of confusion over the name of this place. It says Playwright Downs on their card but it is more generally known as The Playwright Tavern and Restaurant. Also, there are three of these places so this one is also known as Playwright Act III. It is located across the street from Brendan’s at 27 West 35th Street. This is a fairly posh place and bills itself as “New York’s newest off-track betting restaurant. Instead of hanging out at your tacky, and sticky, OTB you can place your bets here while dining in comparative splendor. There are 36 flat-screen televisions that keep you abreast of how your horses are doing and also show a wide variety of other sports related programs. There are also, of course, several OTB betting machines.

The restaurant itself is privately owned by the betting is run by New York OTB and I presume the rent the space for their operations. I am always somehow amazed by the fact that the local bookie in the corner barbershop can make a handsome living but OTB seems to lose money every year. One of those mysteries of life.

The restaurant manager was especially accommodating to the film crew and agreed to change the channel the televisions in the area where filming was taking place so it wasn’t showing a competing network.

The bar is wooden and has the requisite brass rail. There are fancy wooden cabinets behind the bar with a row of beer bottles sitting on top displaying the selection available. Large round lights are suspended from the ornate ceiling. As befits the nature of the place, the dining area has pictures of both playwrights and horses. Grey marbles stairs lead to the upstairs dining area which is decorated with more pictures of horses and horse-racing. There is also a glass case that holds the uniform of the unknown, at least to me, jockey.

I had a draft Brooklyn lager. 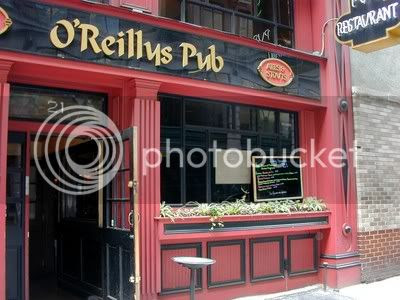 Just two doors down from Playwright Downs a big neon sign announces O’Reilly’s. There is a picture of happy diners on one side of the entryway. This is a comfy Irish bar well suited for hanging out. The floor is faded wood. There is a long oak bar with a fake green marble top and a brass rail. A large fish tank behind the bar contains numerous colorful fish darting about. The restaurant special for the day is handwritten on a bulletin board nailed to the wall above the fish tank. The ceiling is painted an orangey maroon color. The wall is painted to look like white tile. Pictures of Ireland decorate the wall. There is also a glass case with Irish currency of various denominations on display. Blue pendant lights hang down over the dinning tables. One of the lights is blown out, as in completely missing. There is a staircase leading to the second floor, but it was temporarily closed off. The bars staff was very friendly, and most accommodating but one, at least, was a bit camera shy.

We ran into a couple that were visiting from England and another fellow who had been drinking at Brendan’s. There was also another pleasant fellow from out on Long Island. We ended up buying drinks for each other long after the filming stopped so I had a few more than my usual one drink. The one that counts though is the Guinness that I had when I first arrived.
Posted by Bar Man at 6:13 PM

My friend Mike and I used to joke that we were going to hit every bar in Chicago (except for the gay ones, but we ended up going to a few of those too!) Everytime we hit a new one he would say, "well that's another one off the list". There are well over 1000 bars on the North side of Chicago alone, but I have no idea how many we actually hit. The "list" was in our heads, and we never counted; we just kept going to bars until we hit them all, which we never did. It's cool that you are documenting yours. I have no doubt that you will reach your goal.

Sir, you are now officially my hero. Your quest is noble indeed. Godspeed, and may The Force be with you always.

I can't wait to retire so I can try and beat your record!

Good call on the Boddington's & the Guiness Dan! Our tastes are alike!

Great job on the blog. I also like bank mitsubishi tokyo

Fantastic job, I really like what've you have done with the site and really look forward to some more awesome updates. I think you might also enjoy this site as well.

horse with no name is a topic I cover on my site. Your readers might be interested in checking it out further.