Busy days and horrific traffic have kept me from posting the last couple of days. Yesterday, for example, what was supposed to be about a 45 minute ride back to the boat after a canal tour here in St. Petersburg took over 3 1/2 hours. We had the same problem the other day after a city bus tour. And, the ironic thing, the streets where traffic just crawls could add a lane simply by eliminating the free parking curbside. It would be like if they allowed parking on the FDR or Westside Highway.

Okay, the cannon that was never fired. It was created in 1586 under the order of Tsar Feodor Ioannovich, the sovereign ruler of all of Russia at the time. It has a caliber of 890 mm and is, supposedly, the world's largest cannon. The cannon’s surface is decorated with cast iron figured friezes, memorial inscriptions and an equestrian image of Tsar Feodor Ioannovich. In 1835 the cannon was fixed on the carriage specially cast for it at the Berdt’s factory in St. Petersburg. Four hollow decorative cannonballs were made at the same time. Ir was never intended to be fired and was made for decorative purposes only.

Now, the bell that was never rung is a different story. 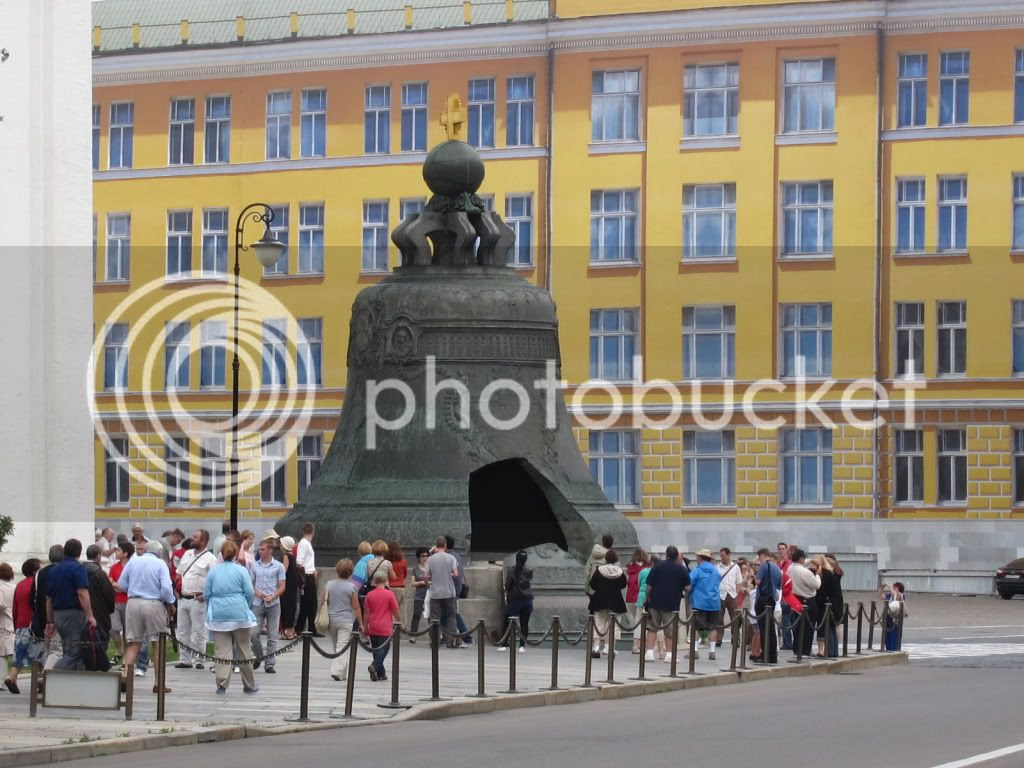 This bell was intended to be rung but it was not to be. The Tsar Bell was commissioned by Empress Anna, niece of Peter the Great, in 1737. At that time most of the buildings in the Moscow Kremin were made of wood and while the bell was still in its casting pit a fire broke out in the building above it. Water used to put out the fire seeped into the pit where the bell was still being cast and a huge piece, 11.5 tons, cracked off. The bell remained in the casting pit for a hundred years before it was removed and put on display next to the Ivan the Great Bell Tower where, I believe, it was intended to be hung.

The bell weighs 216 tons, is about 20 feet tall and has about the same diameter. It is approximately three times larger than the next largest bell, the tenor bell at Liverpool Cathedral.

Moscow, like Rome, is built on seven hills and the Kremlin originally was a walled city built on one of the hills with a command of the nearby river and surrounding area. It was, in essence, a fortified castle.

Views Of The Wall, A Tower, And The River Beyond 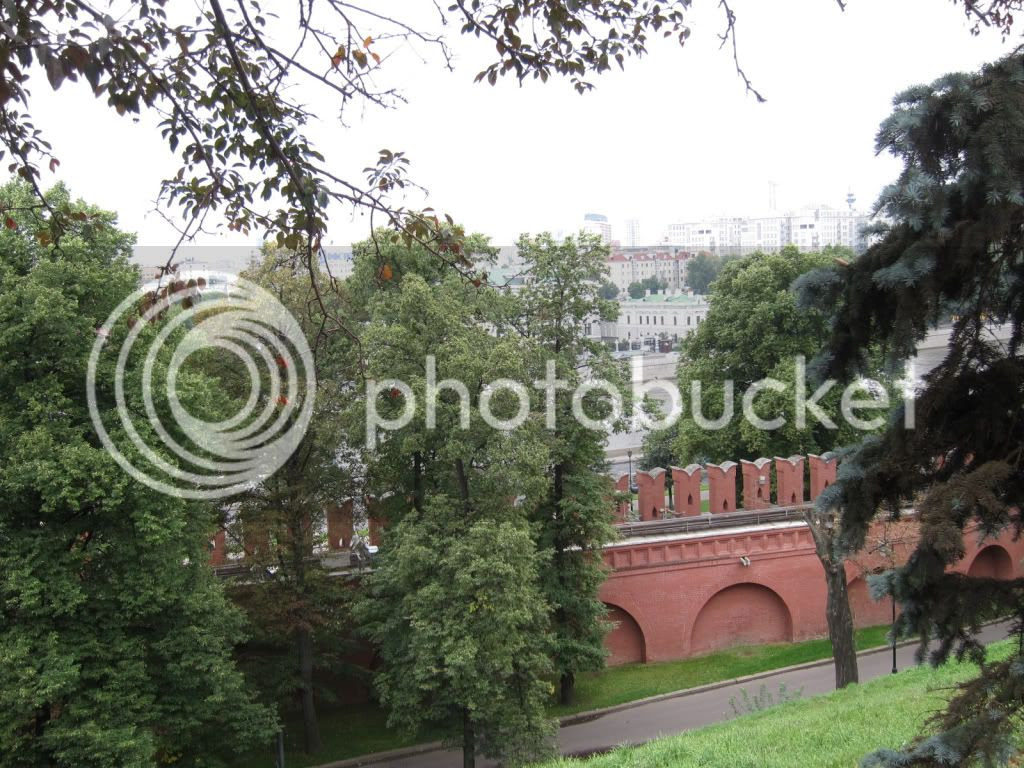 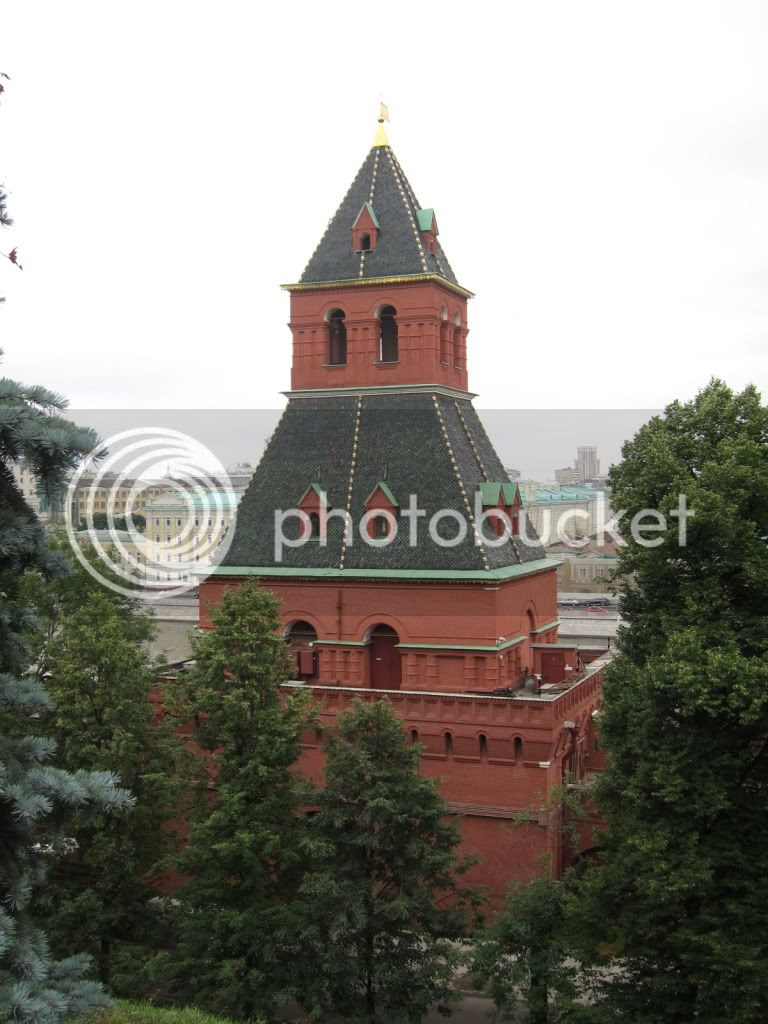 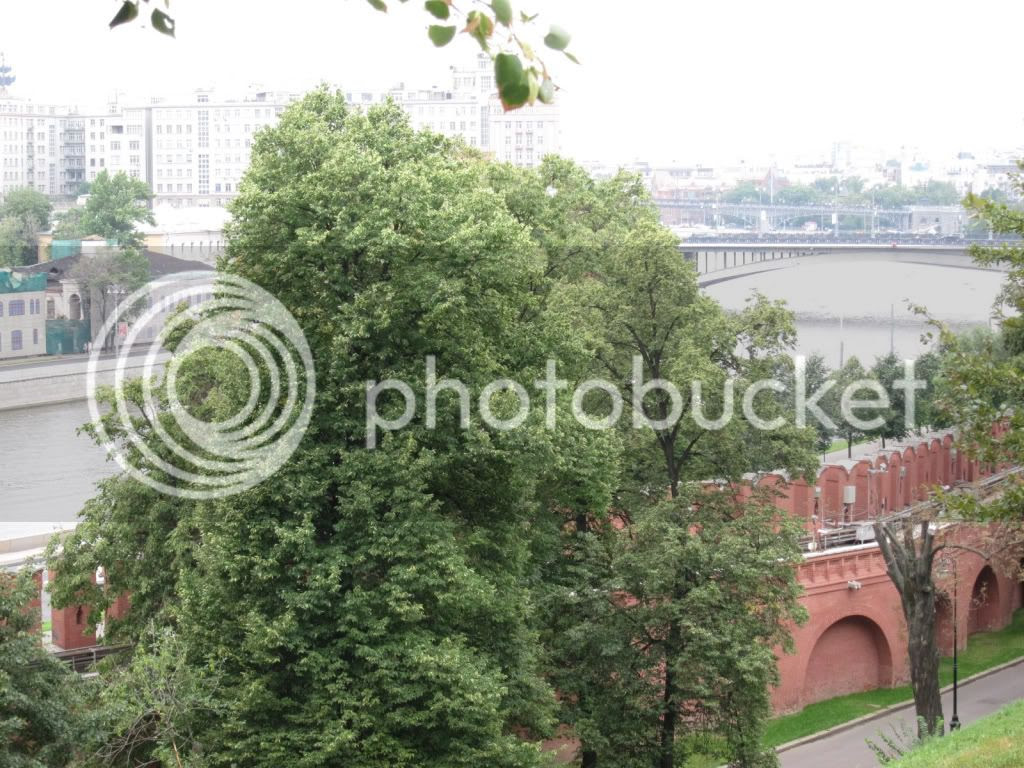 Well, that is about it for the Moscow Kremlin. Well worth the visit and gave me an entirely new perspective on just what the Kremlin is all about.

Okay, here is a Russian joke. And the mere fact that you can openly tell such a joke tells you something about how Russia has changed. What is the tallest building in Russia? It is the KGB headquarters, because from the basement you can see Siberia. And it wasn't too long ago that if you were ever hauled to that basement Siberia was probably your next stop. Or the grave.

You can sense how recently the repressive policies of a police state were eliminated. If you talk to younger people they are very open and helpful but if you approach an older person they often just turn away as if they are afraid to talk to you. A side note, the only statue or memorial to Stalin is in his home town, a relatively small village. All others have been removed.

Well, this was a bit of a short post but it will have to do for now. We are going to be heading out to catch our plane soon for the long flight home. I will be posting more about our trip after I return, though. I am going to miss having lox and sparking wine for breakfast every day.
Posted by Bar Man at 2:05 AM

I liked Rome, but went with a tour group and was steered to too many touristy places. After being there a few days and finding my own way around a bit it got a lot better. Our tour group leader either didn't know about, or didn't want to tell us about the street-car (or whatever they are called) stop just a short walk from our hotel. But we found it and used it.

I had the chance to ferry some aircraft through Russia to China a few years back. The one stop we made was to Khaborosk (sic) in extreme NE Russia for gas. At the terminal still stands a Lenin Statue and the Hammer and Sickle is still proudly displayed around the airport. Never had a chance to explore the town, but I'd sure like to get and see some of it all.

Fascinating stuff and quite educational. But the first thing I thought when I saw that bell was," That would make a neat clubhouse."

Lenin they still like, just not Stalin. The bell was used for a small chapel for awhile.

Well it must to be nice to visit places like the Kremlin. I prefer to travel to tropical places in South America.
safemeds