As I already mentioned, after seeing the Black Coffee Blues Band the Mysterious Chinese Woman and I headed to Frankie's 457 for a little nosh. 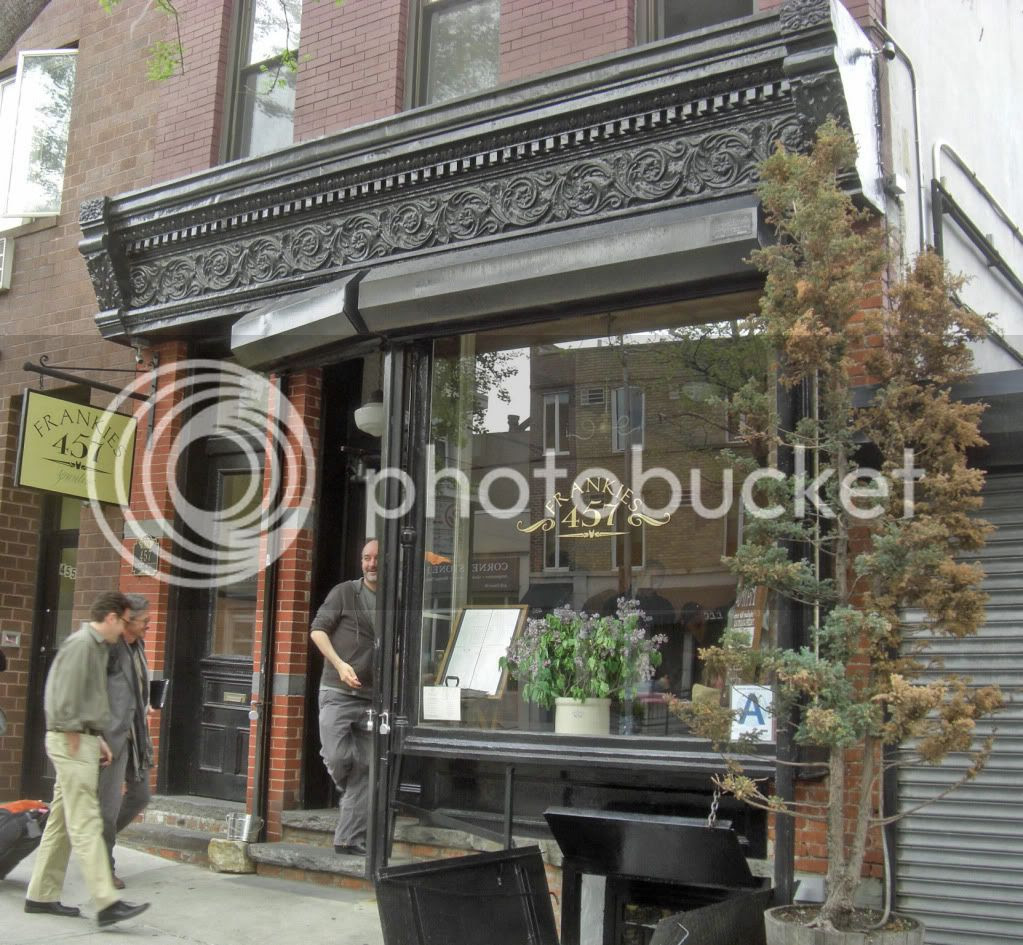 As I said before, this is kind of a small place, very friendly, and with a homey feel to it. And I don't know why they don't have an apostrophe in their name. This place is at 457 Court Street kind of in my neighborhood and they have another one in Manhattan at 17 Clinton Street and I bet you can guess what that one is called.  Now pay attention, that is Clinton Street in Manhattan, not Clinton Street here in Brooklyn.

There was a short wait for a table inside and it was a bit too chilly for me to want to sit outside so I forced myself to have a beer at the bar.

Someone Has To Do It 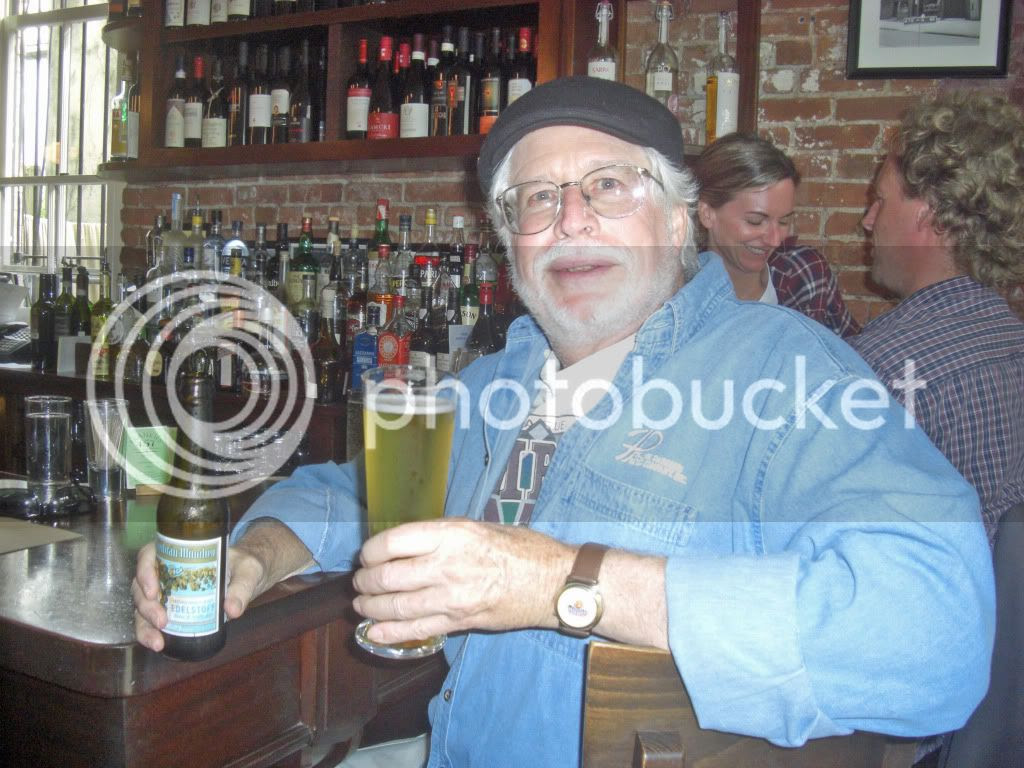 The beer I had was an Edelstoff from the Augustiner Brewery in Munich, Germany. This brewery has a history that goes back to 1328 although, obviously, it has changed a bit since then. The Edelstoff is brewed for export only because, as you may know, the United States requires stuff to be added to beer that would violate the Bavarian "Reinheitsgebot" (Purity Law) of 1516. It always amazes me that European's manage to survive quite well drinking beers and eating foods that, by law, are not allowed in the United States. Ah, but all those preservatives and stuff have to be good for us, Right?

Anyway, the Edelstoff is a crisp and sparkly brew that is very refreshing. It is a decent 5.6% ABV and downing a six-pack of this on a hot summer day would be no problem at all. But it was a chilly spring day so I only had one.

More Of A Wine Day 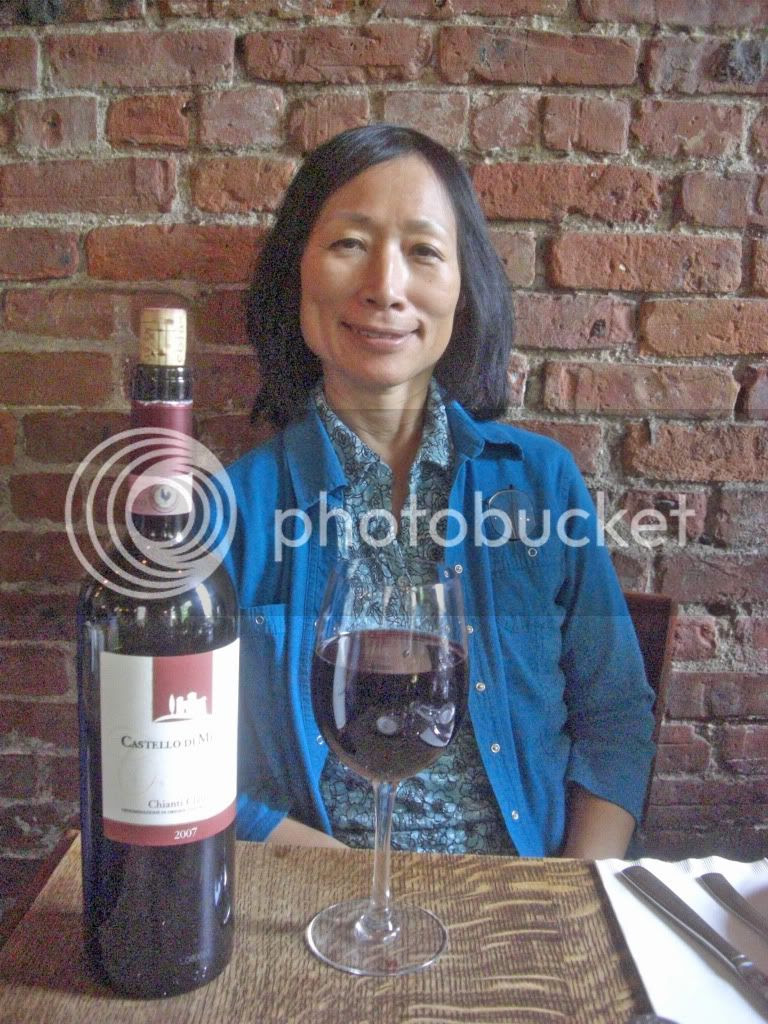 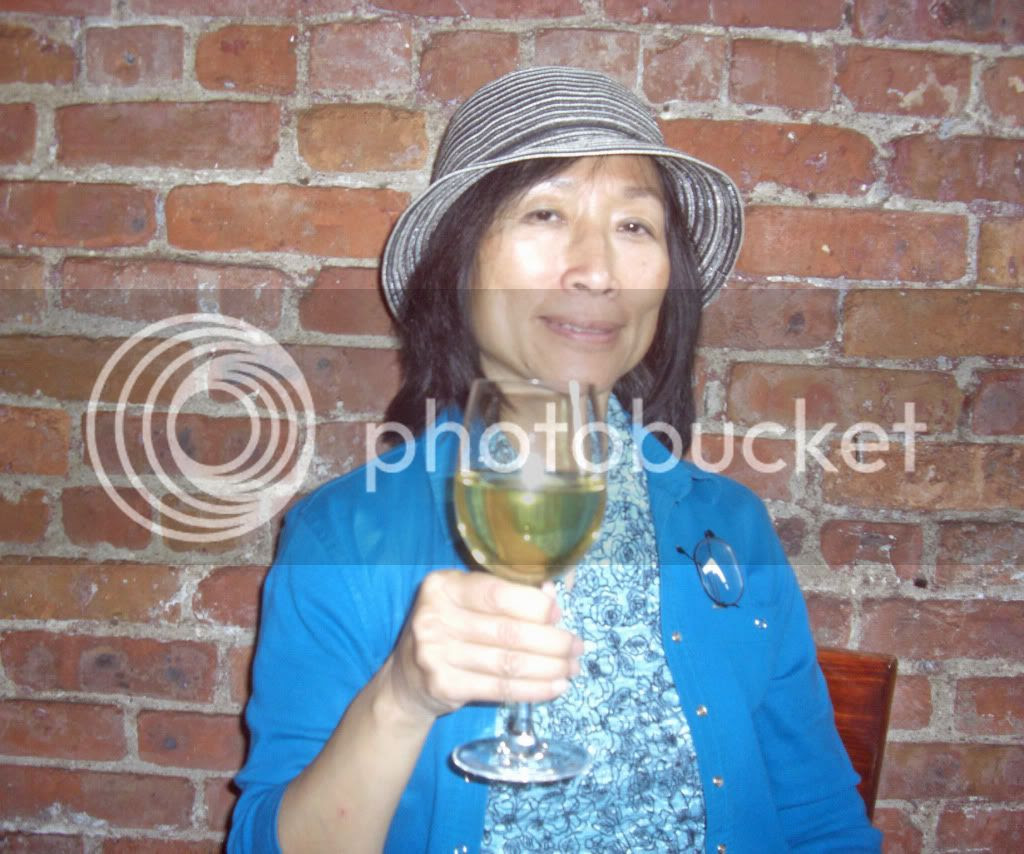 I generally prefer a red wine but the Mysterious Chinese Woman likes the white. I bought a whole bottle of the red because I wanted a Chianti and, surprisingly, they didn't Chianti by the glass. They do let you take the unfinished bottle home with you, as almost every restaurant does.

We weren't overly hungry so we just ordered appetizers. An octopus salad for the Mysterious Chinese Woman and a cold cut sampler and cheese plate for me. 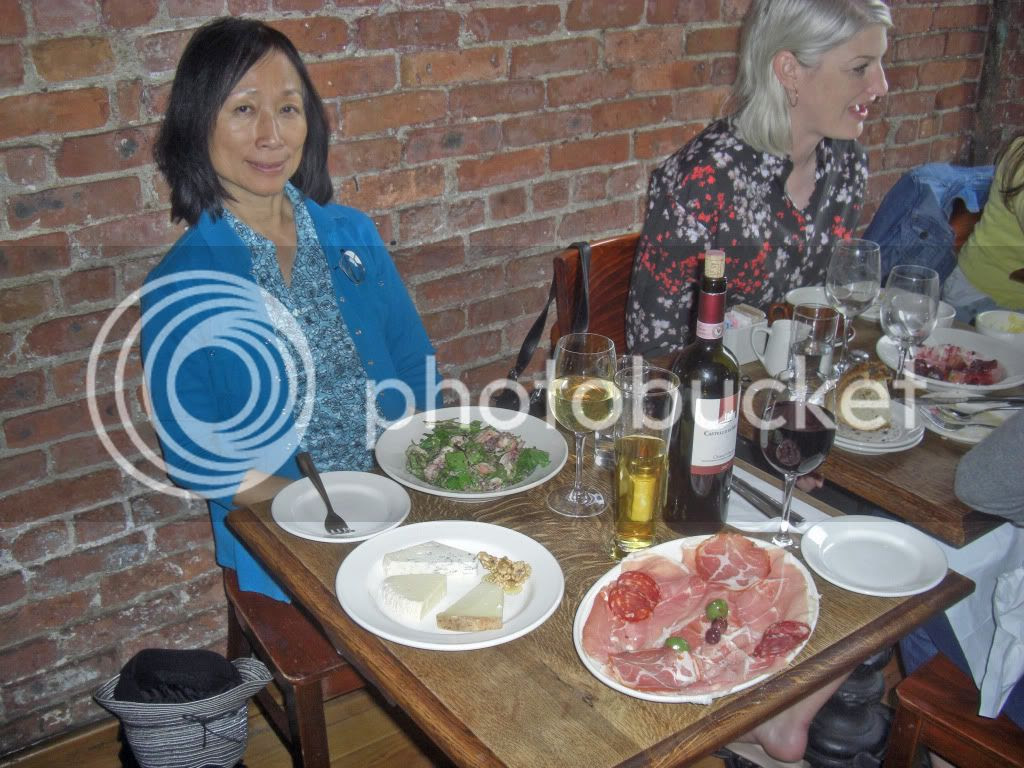 Although it was too chilly for me outside, there were some hardier souls eating out in the nice looking area.

They Were Probably Drinking Hard Stuff 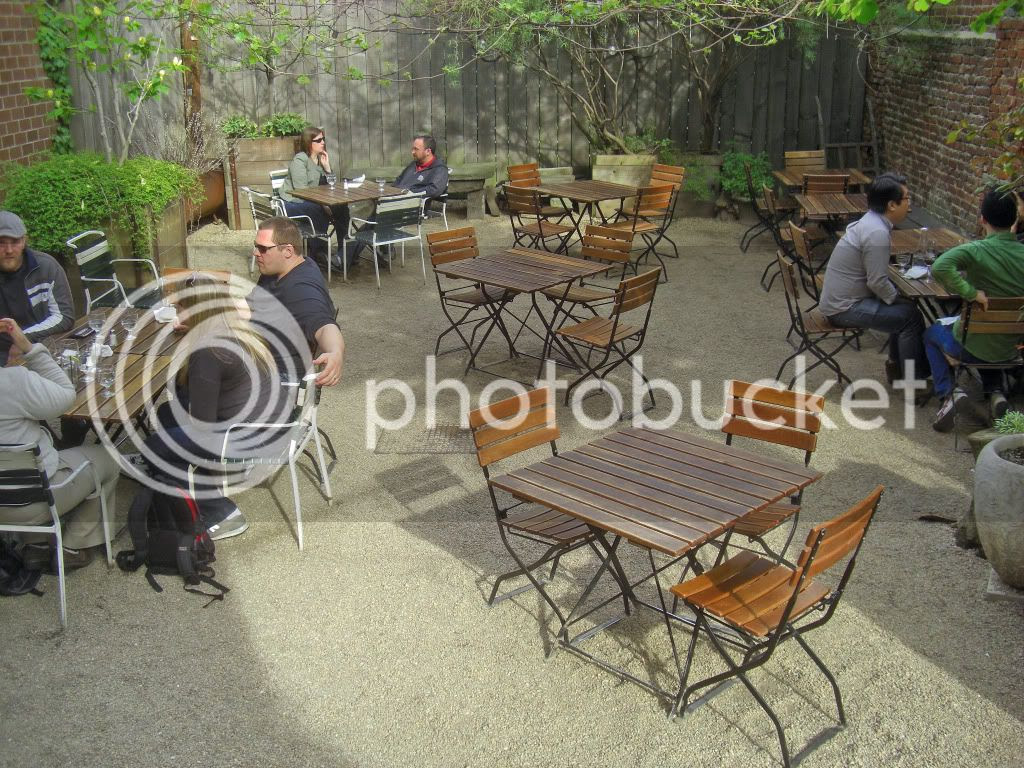 They had a grill outside but I am not sure how often it gets used. I hasn't been used in awhile, that's for sure.

I Could Fix This Up 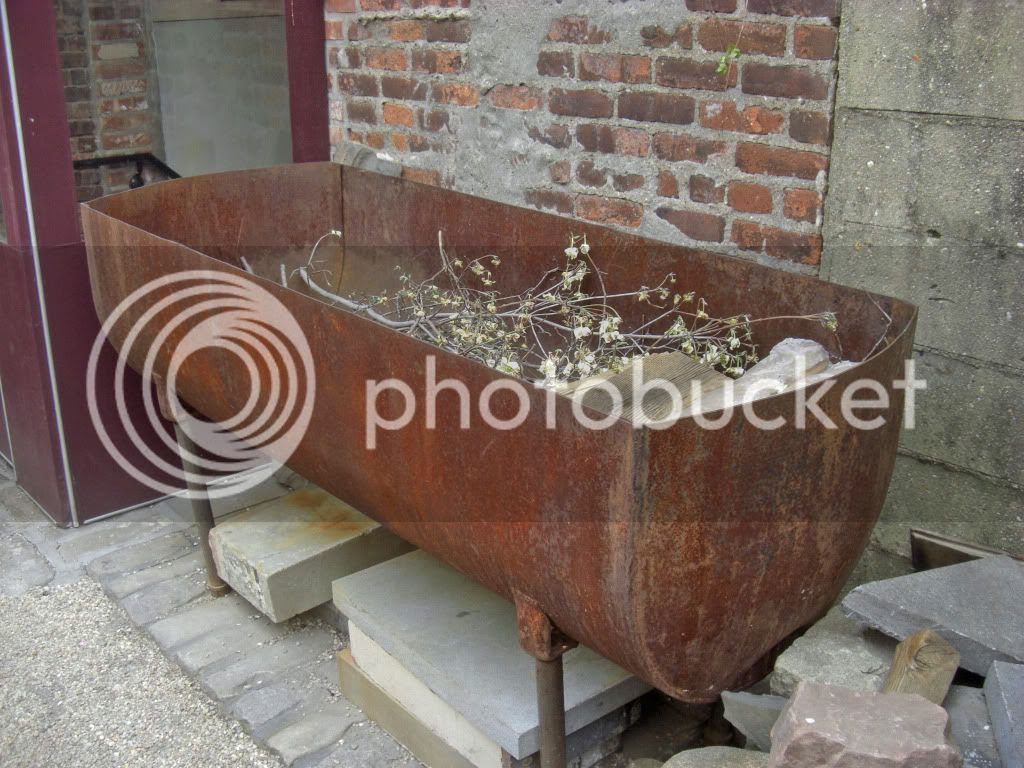 There is another indoor area that is separate from and larger than the main restaurant, but it wasn't being used today. Maybe it is for private parties or something. 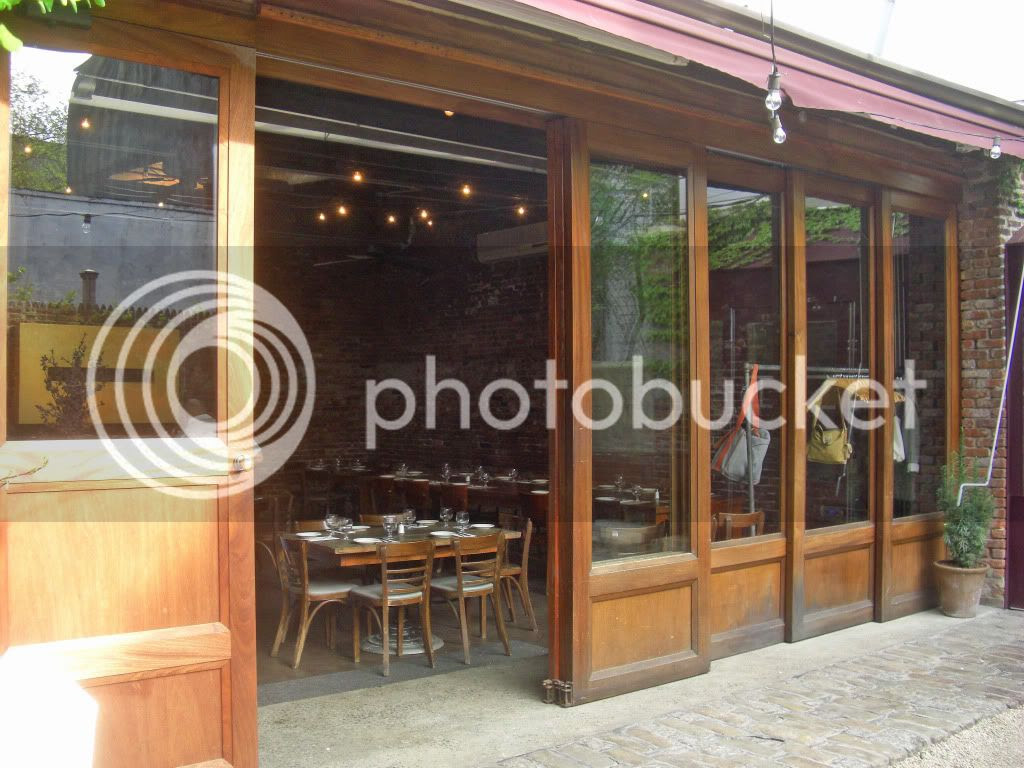 I did bring most of the wine home but it didn't make it through the evening. Hey, once it is open, you know it won't keep. I also took home some of the cold cuts and cheese with some bread and had that for a snack the next day.

I will have to head back to this place again in the not too distant future. There are so many good restaurants that are closer to where I live, Queen being one, that I tend to get lazy and don't wander too far. This one is worth the walk, though.

It looks like a beautiful place, the food looks also excellent, thanks for the review and the recommendation.
xl pharmacy