I Laughed So Hard...

After visiting Pacific Standard for a few pints I decided to head to Pete's Waterfront Ale House for a little lunch.  I passed Hank's Saloon on the way and was pleased to see it looked as disreputable as ever. 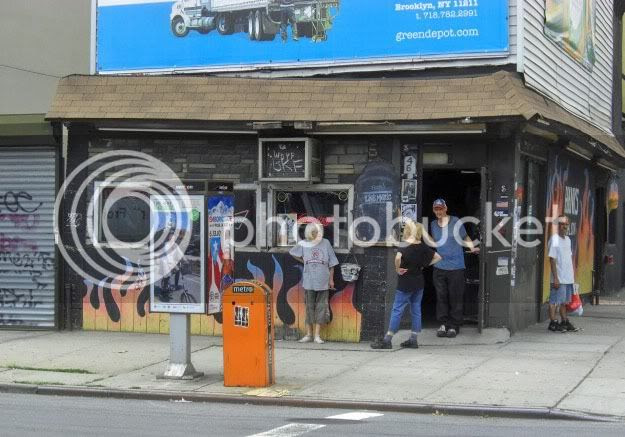 I am glad to see there are still a few bars around here that aren't cluttered with strollers.

This has nothing to do with anything, but I thought it looked kind of cool.  It was sitting outside a store on Atlantic Avenue that sells all kinds of neat old stuff, from a pinball machine to old LPs.

The Cock Of The Walk 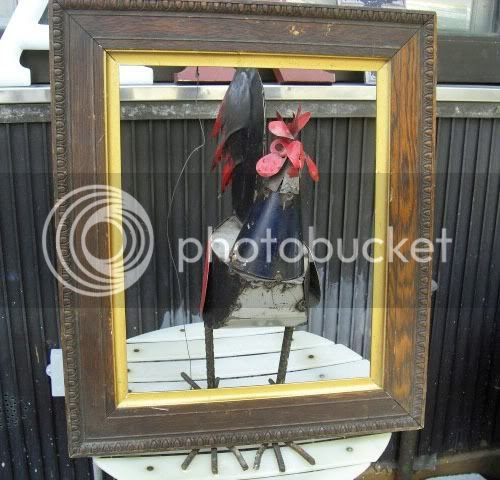 When we got to Pete's the dining area was packed.  It looked like there were at least two large groups celebrating something and then the rest of the tables were filled with people just stopping in for lunch.  No big deal because I like to have a beer or two at the bar before sitting down at a table for my meal.

I started out with a 21st Amendment Golden Doom, a strong - 7.8% ABV - Belgian style golden ale.  Very good, crisp and spicy and very refreshing.  Maybe I should have had this at Pacific Standard because 21st Amendment is a California brewery.  Actually, I don't think they had it there.

After finishing my beer and chatting a bit with Gaid, the World's Friendliest Bartender, the Mysterious Chinese Woman and I found a table and sat down for lunch.

I ordered a Blue Point Rasta Rye to go with what I had hoped would be my Duck Burger with Ginger Onions.  The beer was good, another strong one at 7.5% ABV and a nice coppery color with a creamy white head.  Similar to the Golden Doom in that it was also a bit spicy but with a little more hoppy bitterness.  Quite good and very quaffable.

Unfortunately the large lunch crowd beat me to the Duck Burgers, they were all gone.  But they still had the Soft Shelled Crab Sandwich so that is what I had.

One Of The Best 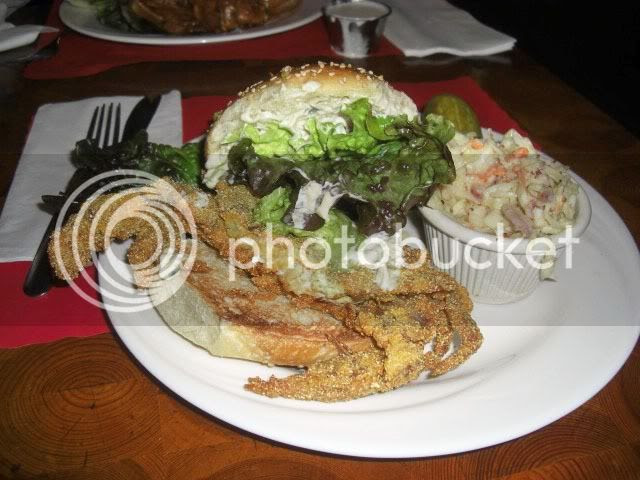 Went Well With The Beer 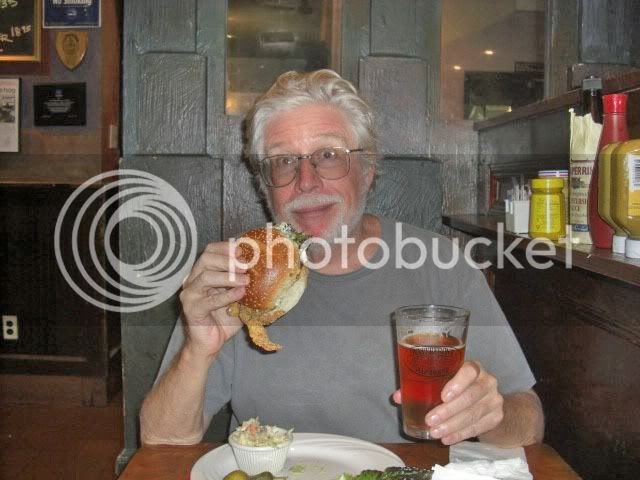 The Mysterious Chinese Woman said something funny and I laughed so hard I had a crab-leg come out of my nose. 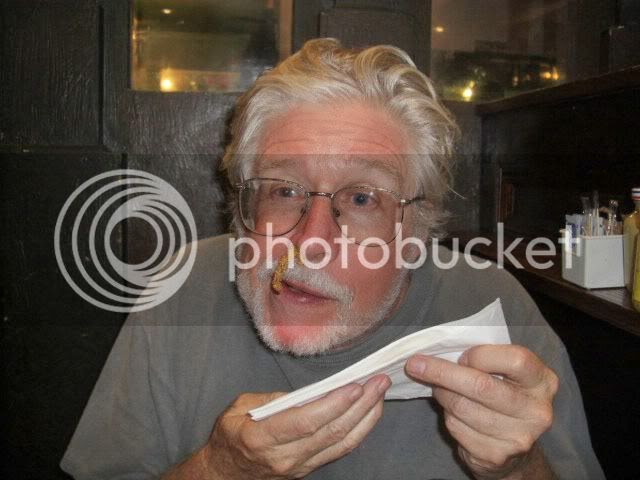 The Mysterious Chinese Woman seemed to think this was most amusing.  Especially after I reminded her that crabs that are just about to molt and could have the hard outer shell peeled off are called snots.  Crabbers used to brake a joint of the claw leg to see if the crab was developing a second skin underneath, in which case it could be peeled. The term snot comes from the fluid that emerges at the break.

She Laughed Until She Cried 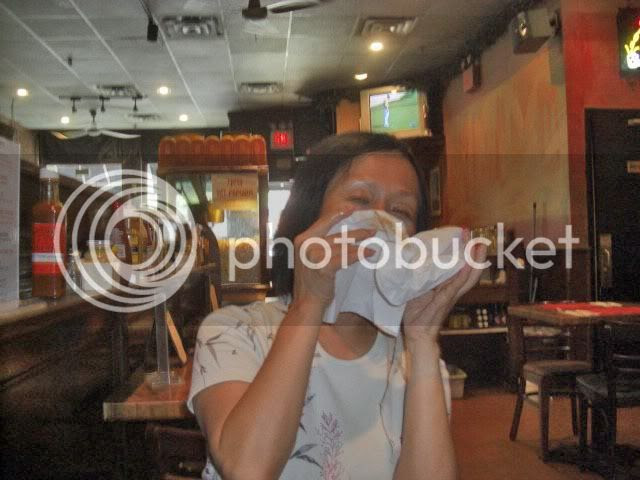 The Mysterious Chinese Woman had Chicken Wings and I am glad to say she had no mishaps. 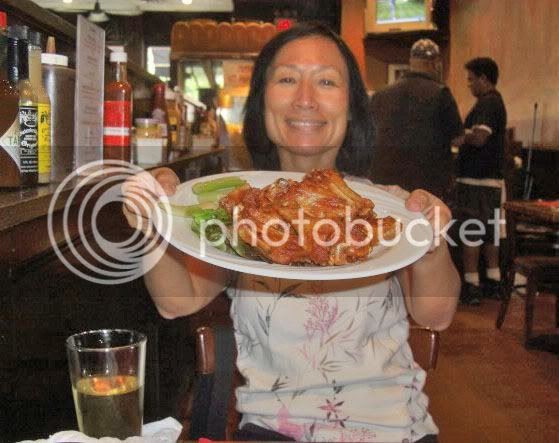 She seemed to be very pleased that she got through the meal with no bones coming out of her nose.

So Proud Of Herself 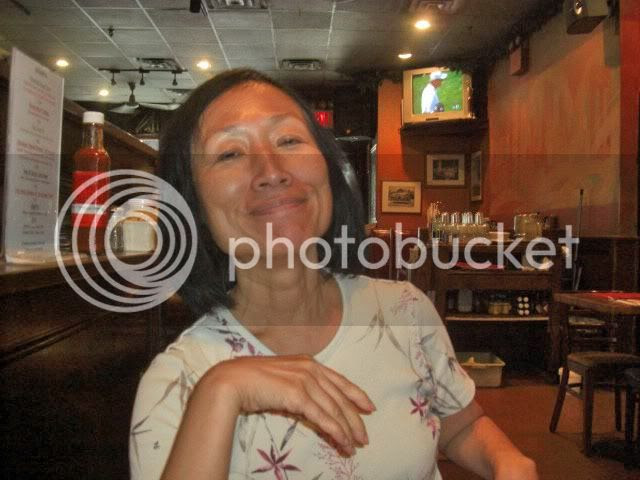 The wings here are always good, and you get a really nice portion.  But it is hard to pass up the crabs when they are in season.  I still wish I had been able to get the Duck Burger.

And my man Nate Robinson shot two for two including a three pointer and made both his free-throws to put up seven points (one more than Kevin Garnett) in the fourth quarter as the Celtics evened the series last night.
Posted by Bar Man at 7:42 AM

You are both certifiable, I laughed so hard I peed a little.