Soggy Sex In The City At Lumi

Before we went to the Gotham Girls Roller Derby last Friday we decided to go out for dinner. I am not too familiar with this Upper East Side neighborhood, but I figured there would have to be plenty of restaurants to choose from. Unfortunately, it was raining when we got off the subway so we didn't feel like walking very far to see what was available. Luckily, we didn't have to. 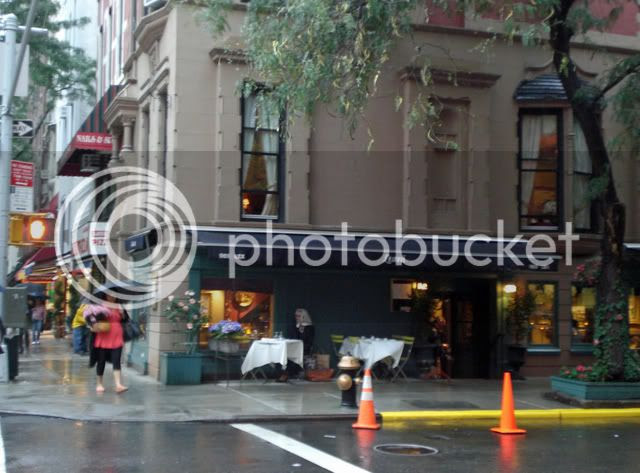 I have to admit, however, that the postings in the window indicating that Lumni was used in either the Sex And The City TV show or the movie (I should have read it more closely) gave me a bit of a pause. I still remembered the bar I was in where the bartender started to furiously make Cosmopolitans for the Sex And The City bus tour that pulled up. 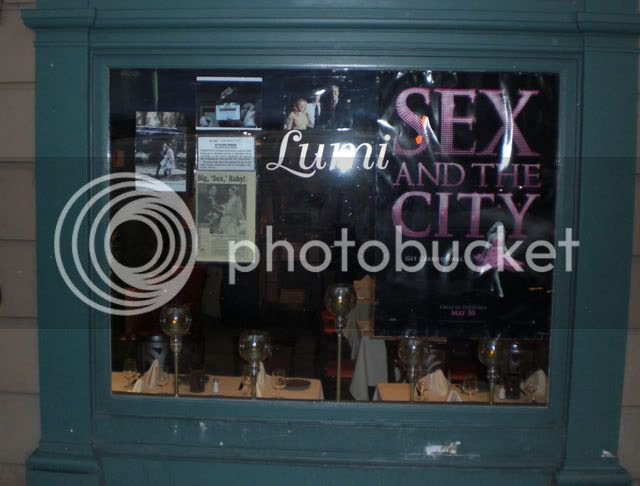 I probably would have opted to eat at Bella Blu just down the street. But, they didn't open until 5:00 PM and it was only 4:40 PM. Now this is one of the things that makes you scratch your head. The doors were open, there were waiters and a bartender and even a few people sitting at tables. If it was my restaurant I would say the kitchen wasn't open yet but you could come in and have a drink while you waited. But they didn't so back to Lumi we went. And it turned out just fine.

Lumi is a very nicely appointed restaurant. Windows looking out onto the street up front, warm and cozy which was really nice on a damp day. 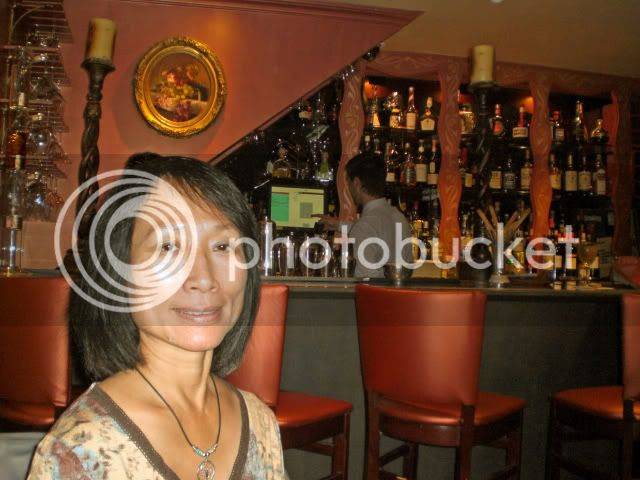 We started out with an appetizer of calamari and zuchini, just very lightly dusted with flour and fried to a nice golden crispness. It was served with a tasty nice chunky red sauce as well. 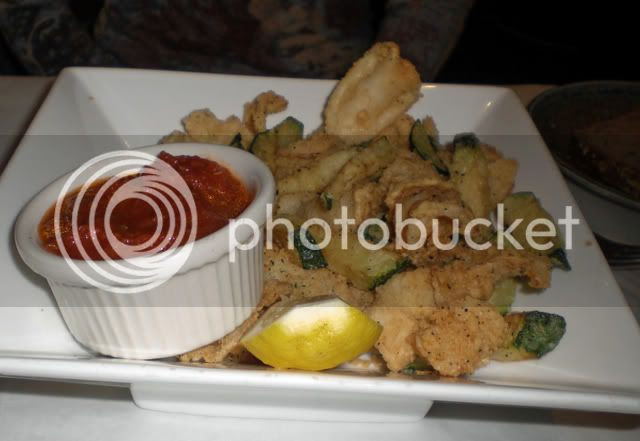 Given that the appetizer was so good we had no hesitation at all about eating our dinner here. This was not a place that was just capitalizing on whatever their connection was with Sex And The City.

The Mysterious Chinese Woman ordered the Capesante Dorate All'olio d'oliva, Carciofi Stufati, sea scallops sauteed in olive oil and lemon, with braised artichokes. Not only were they huge, the were both succulent and sweet. Easily some of the best I have ever had. 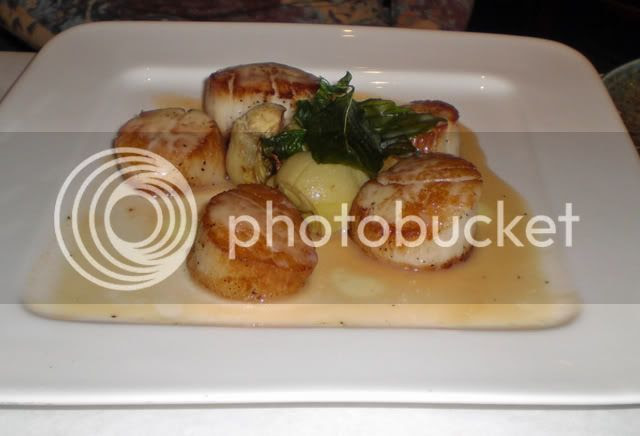 I ordered the Merluzzo al naturale, Salsa di Porri, cod fish filet broiled in its own juices, topped with asparagus, radish and fennel shavings, over a sweet red tomato sauce. I guess I was expecting a spicier sauce, more like a pasta sauce, over the cod. But, then, I should have read the menu a bit more closely. The cod was, indeed, served over a "sauce" of freshly chopped tomatoes. I now know that merluzzo means cod so I guess this dish is a naked cod. 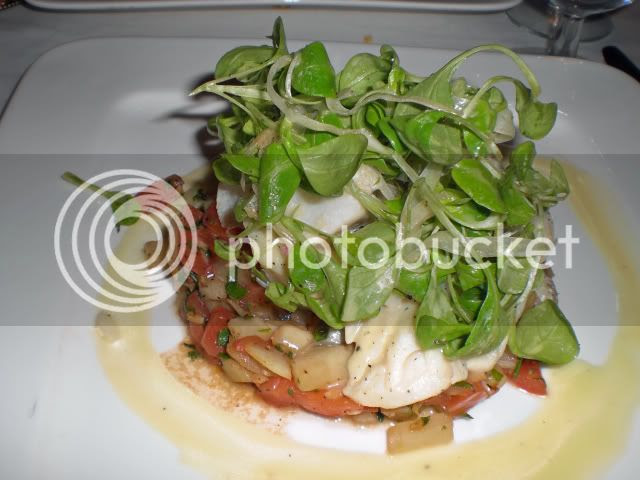 This dish was initially a bit bland for my taste, but there was no mistaking that the cod was fresh. Once I got my mind around the fact that this was a dish of fresh tastes, the cod, the peppers, the fennel, asparagus, and radish, it was quite delicious and the more of it I ate the more I appreciated it. By the time I was done I had already decided that I wouldn't mind coming back here to have it again.

Even though we were both kind of full we still had time to kill and it was raining outside, and it was warm and cozy in here, and the staff was pleasant, and, well, they had a desert menu.

More Than Enough For Two 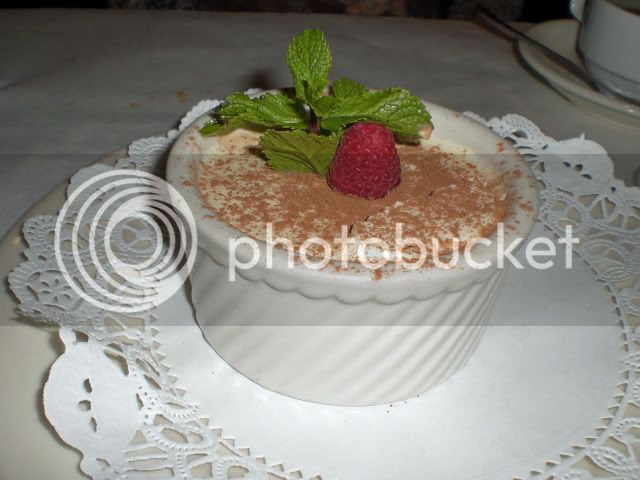 This is their version of tiramusu, and it was delicious and unctuously rich. The ladyfingers soaked in espresso and a bit of brandy were buried deeply under the thick layer of marcapone cheese. It went perfectly with an espresso and a chilled glass of moscato, slightly sparkly and sweet enough to hold up to the tiramusu.

We took a quick peek at the upstairs dining area and decided that next time we come back it will be later in the evening and we will specifically request a table up there. 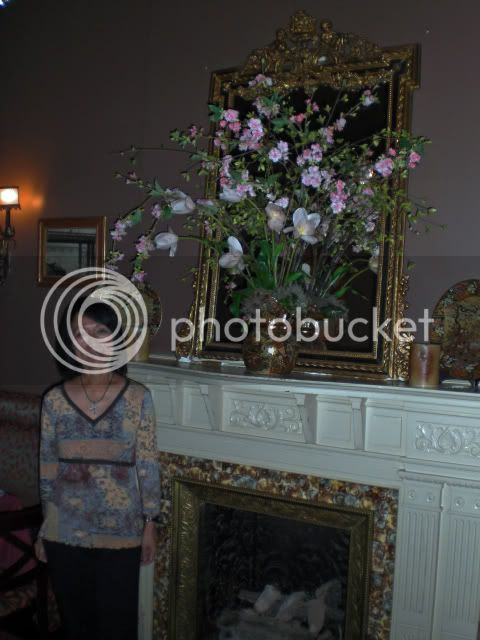 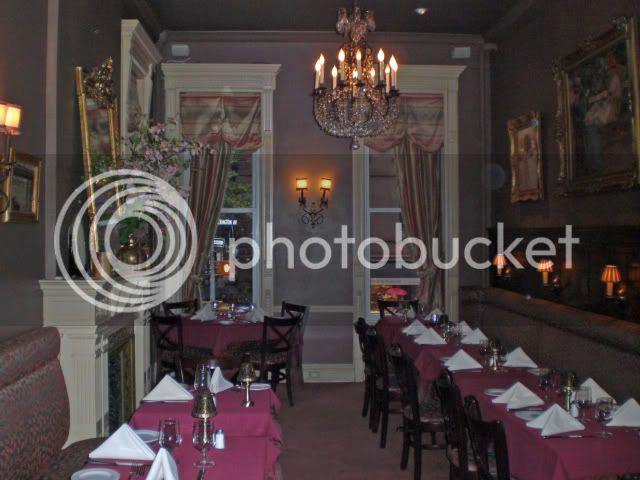 I am glad the Sex And The City sign didn't prevent me from having dinner here. I was very happy with not only the food but the service. There was nothing touristy going on here, just a nice neighborhood restaurant. Granted, it is an expensive neighborhood and this restaurant isn't cheap, but I also didn't think it was overly expensive for what you got.

Oh my gosh, that all looks so good!

Hello .. I am truly grateful with those responsible for creating this blog, reading is something that I enjoy very much, for this reason, I have a habit to read articles like this every day. The theme was really interesting, as the content. Some time ago I attended a conference called guanacaste costa rica real estate, this conference was very creative, and also developed similar themes to those discussed on this blog.