Well, nobody correctly identified the tasty looking dish that was pictured in my previous blog. But, as promised, all shall now be revealed.

I shouldn't have been quite as surprised about this as I was. Earlier in the week Jim had sent me an email asking me if I knew what a buffalo fish was. I told him I thought it was like a carp, a bottom feeding "rough" fish. In the Midwest, where I am originally from, nobody eats carp though, and they are considered a nuisance because they can crowd out other more desirable species. Jim, of course, showed up with a fourteen pound buffalo fish. 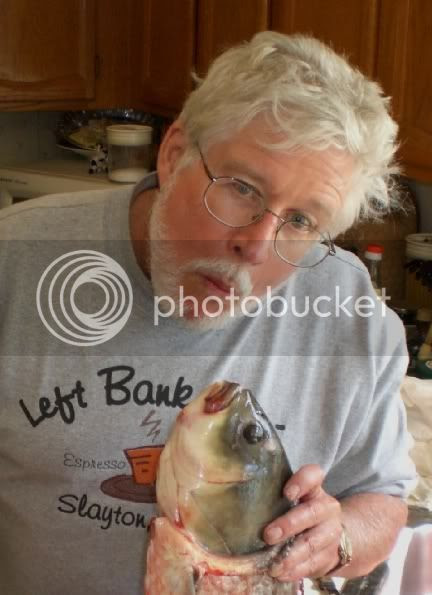 Of course Jim then left it to me to deal with this monstrosity on my own. And I wasn't too sure what to do with it either. It hadn't been cleaned, of course, and was too big to fit into my smoker. 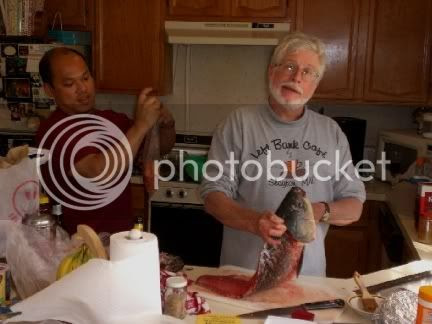 A Lot Of Eggs 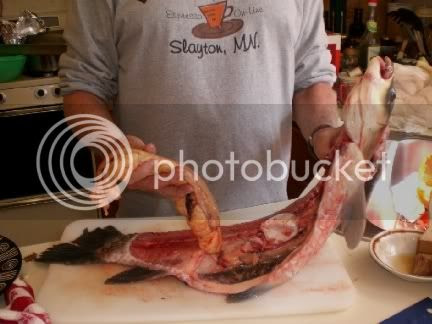 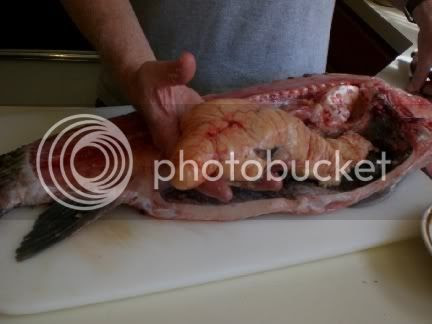 Yep, that delicious looking dish was a lot, a whole lot, of buffalo fish eggs. In fact there were more eggs in that fish than meat. I tried my best to fillet the fish, but I pretty much botched that up and ended up with mess of meat.

Not A Pretty Sight 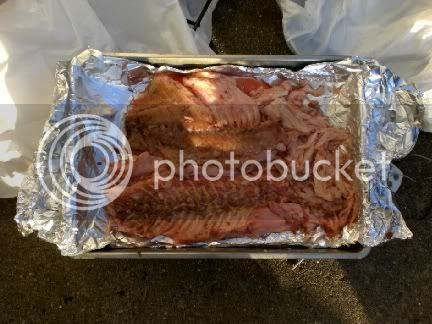 Sadly, things got worse. The top of the smoker is supposed to fit loose, but I have a dent in mine. You have to line up the dents to get the top on right. For some reason I was impatient and kind of whomped it down. Then, when I went to open it, it was stuck so I had to jerk it pretty hard. When the top popped off the grill dislodged and all of the fish meat fell directly onto the coals. 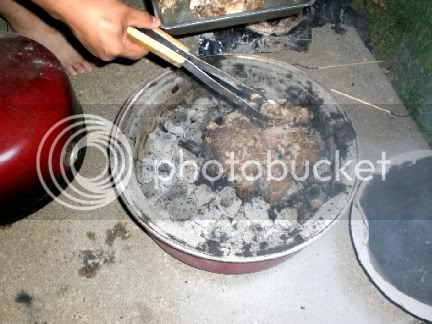 Jim was bound and determined to at least try some of the fish so he gamely tried to pick some of it out of the charcoal.

There Has Got To Be A Bite In There Somewhere 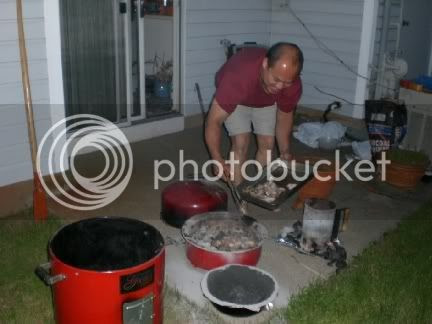 To his credit, he did manage to salvage a plateful. Not much to show for a fourteen pound fish though. 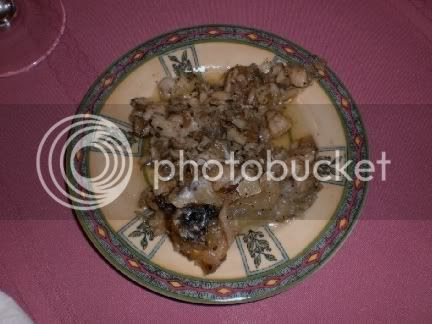 I did salvage the head though, which I plan on using to make fish stock. 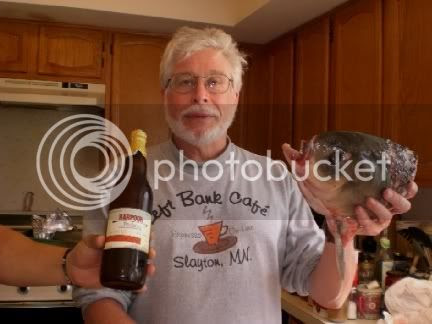 You can see a beer poking into the above picture and yes, it was time for a beer. 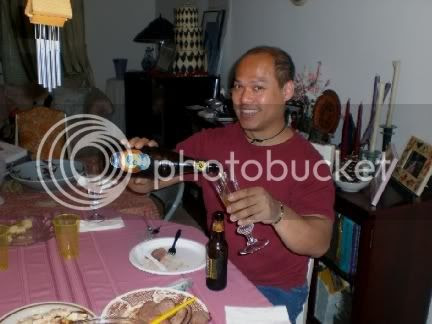 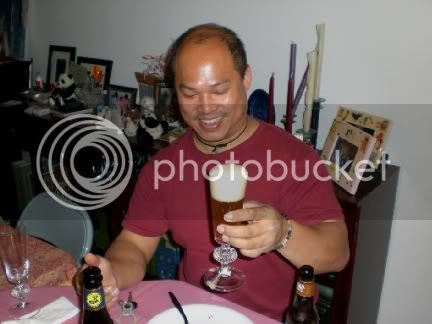 Just to let you all know, earlier in the day I did successfully smoke a chicken and a boneless leg of lamb. The chicken I soaked overnight in root beer and some kosher salt. Then I glazed it with an orange/honey glaze. It was deemed to be a great success. For the lamb I used a dry rub that I made and everyone liked that as well.

The next day I decided to put the fish behind me and start afresh. 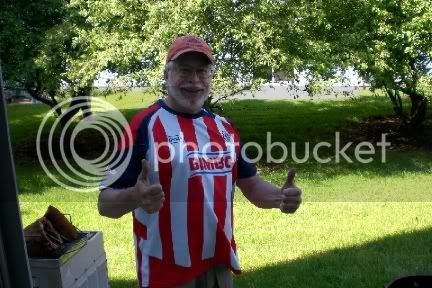 I did two racks of ribs, one with the dry rub I made and the other with soy sauce and five spice powder.

Ribs Getting Ready To Go 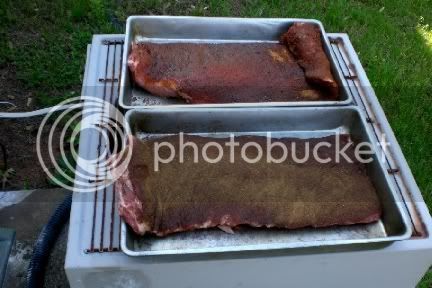 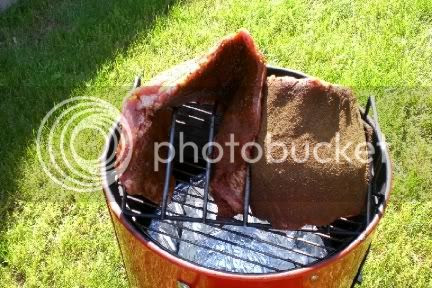 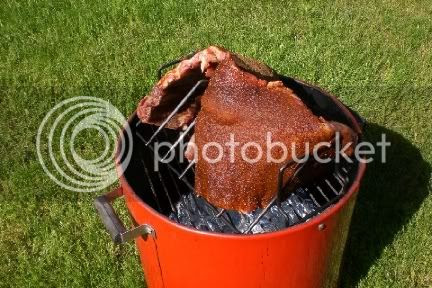 I also did another chicken, this time brined overnight with pineapple and orange juice with kosher salt and a duck brined with apple juice and kosher salt. I used the same glaze that I used on the chicken the day before. 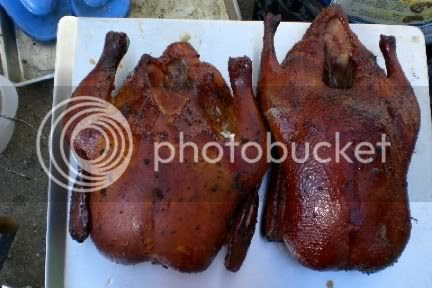 And, of course, I had to cook the fish eggs.

Giving It The Old College Try 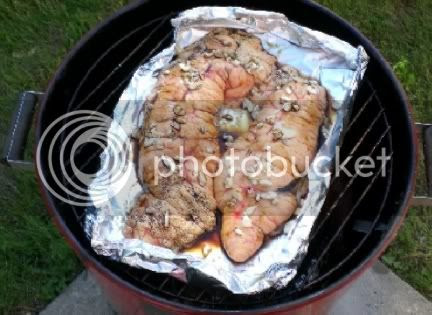 As you may recall, they did turn out pretty good. In fact just like they were supposed to. They had a smooth creamy texture with a bit of a crunch on the outside. 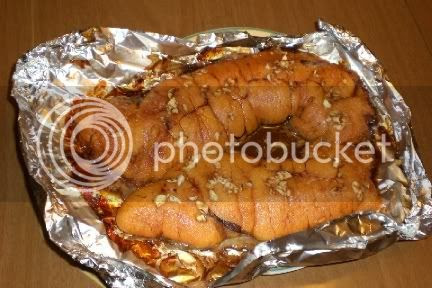 And yes, Jim and I did eat some. Not a lot, but some. Maybe one tablespoon full each. 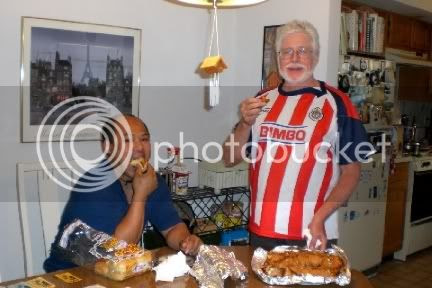 It was Jim's birthday though so we were able to clean our palate with his cake. 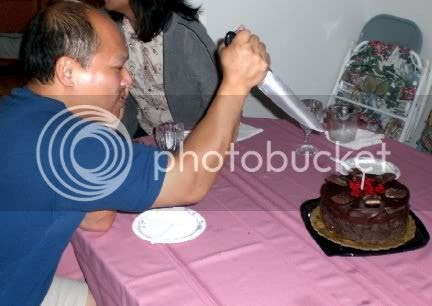 I guess Jim was still upset about the whole fish thing and was taking it out on the cake. Well, better the cake than the cook.
Posted by Bar Man at 3:19 PM

what a huge fish. That looks like so much fun.