I decided to take a walk around my neighborhood just to see what, if anything was new. I didn’t have to go too far before I found my first place. 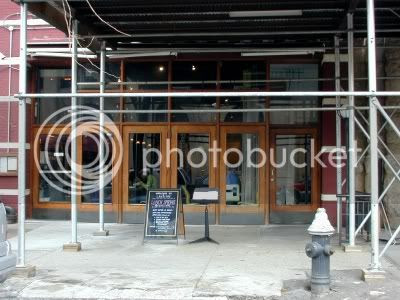 I don’t remember what this place was last, it has been about half-a-dozen different things since I moved into the neighborhood. My favorite was when it was Slade’s Drinking Club, even though the bartenders always ate the filberts that I personally bought for them to keep so I could have them in my Rusty Nails. When I was a wee Bar Boy in Minneapolis you always got filberts in your Rusty Nails. You don’t see that anymore and most recipes no longer call for them. I wonder if it was just a local thing.

Lantern, at 101 Montague Street, is now a Thai restaurant and bar. The top of the bar is kind of cool. It has heavy oak beams on either side of a metal trough containing polished stones. The beams and trough are covered by thick panels of clear plastic. There is a clear vase sitting on one end of the bar and it contains large stalks of bamboo covered in silver balls like the ones you hang on your Christmas tree. The front of the bar is dark wood paneling. The bar stools have metal legs and thick square black seats.

The wall behind the bar is light tan and has wooden slats projecting out about an inch or so from it. There are small lights in plastic tubes behind some of the slats. There is one narrow wooden mounted in front of the slats and it holds bottles of liquor and wine. Below are plain looking white shelves holding glasses. More liquor and wine bottles sit on top of the shelves. There is a good-sized flat screen television mounted on the wall behind one end of the bar.

There are lots of clusters of silver balls hanging from the ceiling (conveniently the bottom of them are at forehead level) as well as small dark square metal temple like ornaments. There is seating for dining by the front windows and in the along a long bench that runs down the middle of the room and along the brick wall. A golden Buddha occupies a place of honor in the back.

I had a bottle of Tsingtao. 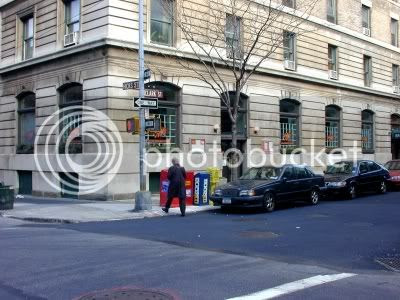 This is another fairly new place, although it has been around for about two years now and isn’t on Montague. It is on the corner of Hick’s and Clark Street. Before that it was a sports bar named Stubb’s, but then it sat vacant for almost seven years. The jury is out on how long this place will survive. You go up a flight of stairs from street level and there is a large dining area in front with tables covered with red and white checkered tablecloths. The large marble topped bar is tucked in the back and you almost have to know it is there to find the doorway that leads to it.

There wasn’t any bartender on duty, just two guys sitting at the end of the bar talking to each other. I assumed at least one of them was the owner or manager, but he paid no attention to me. I was about to leave and actually made it to the door when a party of five came in (the place was empty when I arrived). A waiter appeared and asked them if they wanted to eat at a table or at the bar. The opted for the table but I figured maybe I could get a drink at the bar after-all. I headed back and, after sitting there for a few minutes, finally asked one of the guys if I could actually get a drink. He said “Sure.” And then nothing happened until finally the waiter came in to get a pitcher of water for the people at the table. The guy told him I wanted a beer and after he went to deliver the water he came back and pulled me one. Not, in my opinion, the way you run a bar. If it is open you serve your customers, if it isn’t, put up a sign.

Interestingly, the bar is really big and there is another dining room behind it. When this place was Stubb’s the bar was always packed, but then I only went there at night. I will have to check this place out some evening just to see what kind of business they do then.

They have those light, metal bar chairs and large white globe lights hang just behind them from the tan patterned tin ceiling. There are two sets of three tubular beer stations on the bar, each with two spigots. The bar back is pretty fancy with glass shelves in front of narrow mirrors beneath light wooden shelving that also have glass shelves that hold wine, bottles of grappa, and crystal vases and figurines. Two small televisions are behind the bar as well as two monitors connected to cameras focused on the street in front.

After a long wait I had a Newcastle Brown Ale and although I might stop back one night just to see what kind of business they do here, I certainly can’t recommend this as a place to just pop into for a drink.
Posted by Bar Man at 8:21 AM

You sure have a lot of patience. I would have jetted for the Henry St Ale House.
I've been to this place for dinner and FWIW, the pizza was pretty good back then. I haven't been back in a long time, so that's all I can say about it. I do recall the upscale decor and fancy TV sets on the wall. In no way would I go back there for anything, though. I guess if I had to rack up 1000 bars in one year, yeah, then I might.

Hey, you have a great blog here! You really are very talented and deserve an honest compliment, congradulations! I'm definitely going to bookmark you!

Hello my dear internet friends! I have some very exiting news. A lot of you know me pretty well now and have helped me a lot. I sincerely appreciate you and I want to do the same for you. Please take a moment to check out this excellent opportunity. I am so very proud to be a part of this business, I just don't have the space I need here to fully express my gratitude and I know you will feel the same way I do. You can even try it out at no charge. Take some time to explore and learn what could be one of the most significant aspects in your life. You will not be wasting your time and I will be honored for you to be my guest. You will love this... Please give me a chance to prove it to you. Click here: multi-level marketing It elegantly covers multi-level marketing related ideas and FREE information. Sincerely, Scott.

I had to let you know how brilliant I think your website is. The service you provide is a much needed one and I wish you success in your venture. Please add me to your mailing list if you owe one:) karlsult@adpost.com

Great bit of blogging on your site! If you get a chance look at my site bar stool