The Mysterious Chinese Woman’s brother and sister stopped by last night. Her sister is going to Spain with us and she is spending the night so we can all leave for the airport from here. We decided to condition our taste buds by going to a Spanish Restaurant (and bar) in the neighborhood. 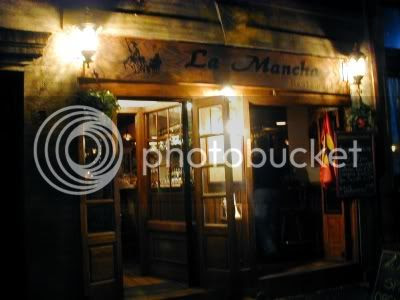 There has been a Spanish restaurant in this vicinity ever since I moved into the neighborhood over 20 years ago. Originally there was one on the corner a couple of doors down. When the owner decided to retire he sold the place and a number of the waiters and the chef opened a place of their own a few doors down. They are now gone as well and the location has been taken over by new owners.

Somewhat sadly it has been remodeled and no longer has quite the air of authenticity that it once did. The old wooden bar where you could often find a few older Spanish gentlemen drinking wine and playing dominoes has been replaced by a grey and red veined marble top with a light wooden front and brass rail. The authentic blood stained bullfighter’s cape and flags that the banderilleros stick in the bulls back have been replaced by posters of bullfighters. Not exactly the same. The old dark wood stools look like they be about the only thing left of the old place.

The bar back is also a new looking light wood affair with mirror backed wooden tiered shelves of liquor and wine. Two racks of glasses hang from the ceiling just behind the bar. Above the bar small rippled glass shaded lights hang from chains. Behind the bar a statue of a black bull sits on the silver cash register and a statue of Don Quixote stands behind it. The bar is L shaped and the small end of it is immediately in front of floor to ceiling windows open to the cool night air which was pleasant. The floor is an interesting tile, alternating light and dark tan with somewhat of a wood grained look to it.

While I was talking to the bartender while having my drink at the bar we discussed the history of the place. She told me not to just compare it to the old place. My guess is that a lot of people do this and the new place doesn’t fare too well. I will say I liked the food in the old place a lot better. I ordered octopus Galician style as an appetizer and it was nothing like I expected or ever had before. It was more like warmed up octopus out of a can with paprika sprinkled on top. But, my job is not to write restaurant reviews. The service was good and everyone was more than pleasant.

I had a Sapphire Bombay Martini, up with a twist.

Just the one for the day bringing my total to 824 for the year and leaving 176 more to go. I will probably hit one or two bars at the airport tomorrow before I head off to Spain, but won't be posting for at least a few days. I am hoping I will find internet cafes while I am there so I can keep everyone up to date with my travels. I am really looking forward to this leg of the journey.
Posted by Bar Man at 10:29 PM

I nice blog I have one too Horse racing tips galoretipster

Great blog, I also have a casino related site, If you want or need more exposure get casino traffic by the thousands at **casino traffic** Works for me!