I decided to head uptown a bit further than I normally do to see what I could see. It looks to be another very fertile area just ripe for the farming. 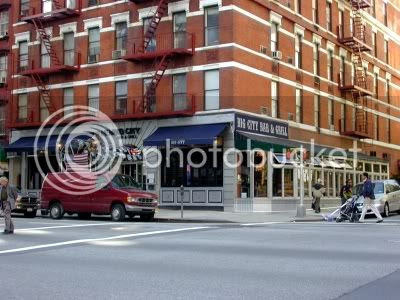 New Big City is located at the corner of 90th Street and 3rd Avenue. A good sized bar with a large adjacent dining area up a couple of steps and separated from the bar area by two interesting columns. They are white blocks that are separated by narrow metal bands on each side of glass blocks. The glass blocks are lit from within and slowly change color. On the outside edge of each column is a light in a rippled glass fixture that also changes colors, but not in synch with the blocks. Cool. On top of the glass blocks sit small televisions of about the same width.

The bar is dark wood and has a bit of a fishhook shape to it. The “hook” part is down by the front and a side window. There is a wooden foot ledge and both bar stools and bar chairs. Five beer stations sit on the bar. Four of them are ornate silver affairs with six spigots each. The one in the center is a fancy dark green ceramic and has only two spigots.

There are five televisions of varying sizes mounted behind the bar and another one in the corner by the door. Behind the bar are windows and tiered shelves of liquor sit below them. Separating the windows are column-like shelves holding a few additional bottles, glasses, and the cash registers. Hanging over the bar are carriage style lights and set further back on the ceiling are paneled lights that match the glass blocks and also change colors. All in all a pretty neat place.

I had a pint of Samuel Adams Lager. 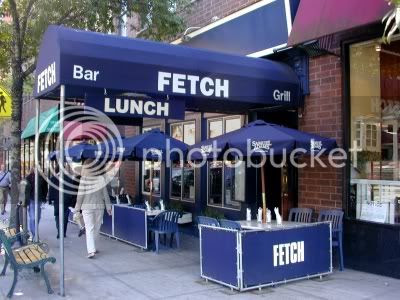 Fetch, at 1649 3rd Avenue is the place to go if you like dogs, or at least if you like pictures of dogs. They are everywhere. Hundreds, if not thousands, of pictures of dogs. The owner really likes dogs. Fetch works with city shelters and rescue organizations like ASPCA, Humane Society, Stray from the Heart, and Animal Haven. Once a month they host animal adoptions and then contribute $1 for each beer sold to these organizations. The owner also raised money for dogs that were left homeless in the aftermath of hurricane Katrina and even adopted one of them himself, a St. Bernard and German Shepherd mix. I didn’t get to meet him but the very friendly bartender, Lindsay, told me all about it.

Lindsay, The Friendly And Informative Bartender 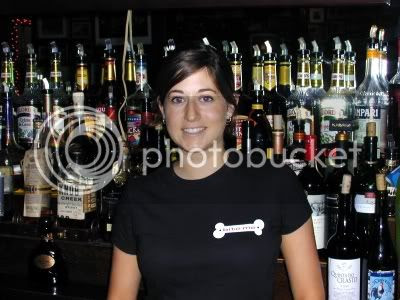 The bar is dark wood, fairly long, with a black tile foot rest. Dark wood bar chairs with oxblood seats. An ornate bar back replete with columns, mirrors, glass shelves, and tiered shelves of liquor. Coolers and cabinets sit down below along with a set of shelves holding the booze for well drinks. Little orange lights decorate the corners of the two end mirrors behind the bar. The middle mirror behind the bar has a large blackboard on it that tells you to “Come! Sit” Stay!” 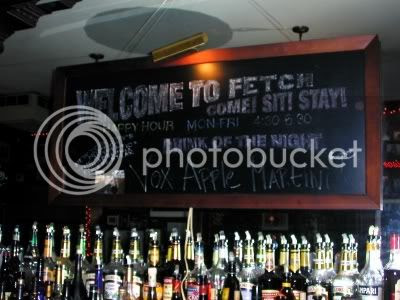 The beer station on the bar is enclosed in a wooden box that has, one guess, pictures of dogs on top. Pale yellow stained glass shaded lights hang over the bar. Opposite the bar is a ceiling high divider that separates the bar area from the dining area. It is wood-paneled to about waist height and has a ledge with stools in front of it. The wall above, like the rest of the walls in here, is deep rose and has a couple of mirrors and a couple of hundred pictures of dogs. Jack-O-Lanterns carved out of real pumpkins sit on the ledge and in front of the slightly recessed mirrors.

This was a very friendly place with a real homey feel to it. The dining room looked quite cozy with a fireplace decked out for Halloween and the walls covered with even more pictures of dogs. 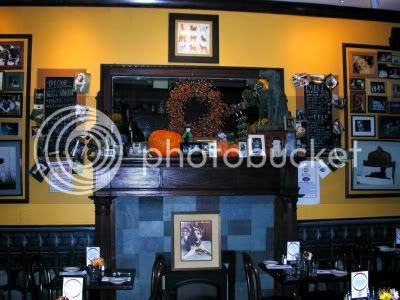 You really need to see this place to believe it.

I had a Flying Dog (what else) Original Pale Ale. 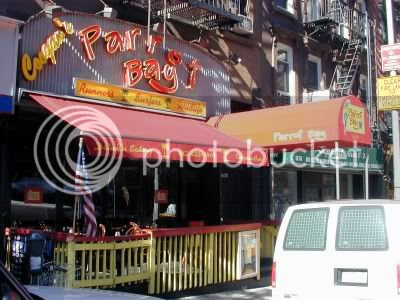 On 3rd Avenue between 93rd and 94th Streets is this large, brightly colored place that attempts to capture a Caribbean atmosphere. It doesn’t do a bad job of it but is a bit too spacious and not nearly cluttered enough to pull it off completely. There is also a baby blue torpedo hanging from the ceiling up front so I am not sure where that fits in. The bar has a wood textured plastic top with a pewter colored edging that acts as an armrest. The foot rest is wooden. The wooden bar chairs have lemon colored seats.

The wall above the windows in front is lemon yellow and has a picture of a parrot on it. Behind the bar are three wooden sets of shelves separated by mirrors that go to the ceiling. The shelves hold wine in narrow wine racks and displays the bottled beer. Tiered shelves of liquor sit in front of the mirrors. On one of the mirrors they advertise the daily drink special, a Caramel Martini. I had to ask, and wish I hadn’t, it is Vodka, Butterscotch Schnapps, and milk. I think I will pass on that one. A narrow stretch of wall to the left of the shelves is brick and has a large ceramic mosaic of a swordfish on it. There are two televisions above the bar set at a slight angle to each other. There is a large chest full of ice and bottles of beer behind the bar.

Opposite the bar booths with red high-backed benches line the wall that is painted in bright multi-colored strips. Pictures of surfers and posters from surfer movies hang on the wall. There is also a small dining area in the back that is up several steps.

I had a bottle of Carib Lager with a slice of lime in it.

A fun day with three bars hit bringing the yearly total to 884 for the year leaving but 116 to go.
Posted by Bar Man at 6:07 PM

Hi, You have a cool blog here. I'm always interested to see other people's blogs who are interested in wine or beer. I am a wine lover myself, and maintain my own wine blog www.pinotgris.net
Stop by and check it out (and say hi, too)!

I'm always glad to see other people who have their own blogs about wine or beer. I am a big wine fan myself, and maintain my own wine blog at www.pinotgris.net
Stop by and check out my blog, and keep up the good work!

Last month I made $12,124 with Google Adsense...Click
here for free on how you can do the same!

For the next hurricane rita texas ; the easy way to keep going.

I was just browsing various blogs as I was doing a search on the word halloween, and I just wanted to say that I really like what you've done with your blog, even though it wasn't particularly related to what I searched for. I appreciate your postings, and your blog is a good example of how a blog should be done. I've only just recently started a Posters website - feel free to visit it when you get a chance if you wish. Much success, antonio.

Hey there ##NAME##! Considering ##TITLE##, good on ya mate! I might not agree with everything, but you certainly caught my eye. I was searching Google for Yorkshire Terrier and Google (in it's infinite wisdom and ubiquitous web presence) landed me on your blog. Couldn't be all bad 'cause I liked what you had to say enough to stop and make a comment! Not my usual practice to be sure. Anyway, well done. I'm always telling my kids how important differenct perspectives and paradigms are so I thought I would make a comment and mention that your's was refreshing and made me think! Thanks again....

Great blog. If you like you can visit bartending.

Great bit of blogging on your site! If you get a chance look at my site bar stool